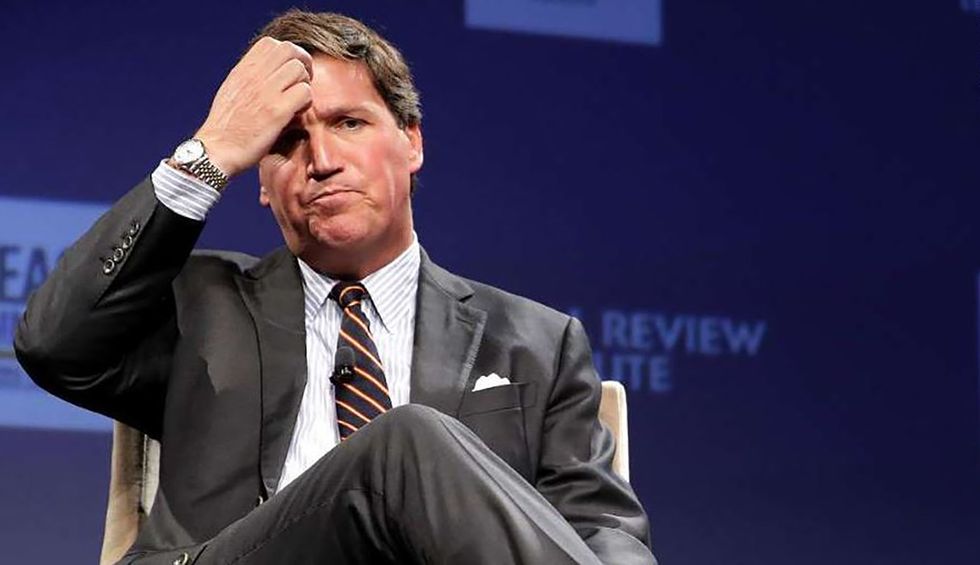 Fox News learned the details of sexual harassment allegations against top network host Tucker Carlson on July 9, four days before Carlson announced on the air that he would be taking a "long-planned" vacation, Salon has confirmed.

Carlson, who claims to have gone into journalism after a career in the CIA failed to pan out, was named in a sweeping and graphic sexual misconduct lawsuit which two women filed against the network Monday in a New York federal court.

The women, Jennifer Eckhart and Cathy Areu, alleged rape and sexual harassment at the hands of some of Fox News' biggest stars, including the recently fired Ed Henry and Carlson's primetime colleague Sean Hannity. Areu singled Carlson out for allegations of sexual harassment and retaliation.

Michael J. Willemin, an attorney who along with veteran sexual misconduct litigator Doug Wigdor represents the two women, told Salon that their team informed the network about the details surrounding Areu's allegations July 9, which a Fox News spokesperson confirmed to Salon in an email.

The spokesperson said the network "promptly investigated" the claims upon learning about them.

"Tucker is still employed, and this has zero to do with his vacation, which was legit and pre-planned," the spokesperson added.

Carlson made the announcement on his first show after the network was informed of the pending lawsuit. At the same time, Willemin claimed that the network had already known for two weeks that he and Wigdor were representing the women.

The news raises more questions about the timing of Carlson's short break, which also came amid an onslaught of criticism after network rival CNN revealed that the show's longtime top writer had secretly posted racist and vile comments on the internet for years.

Carlson, who once took a vacation when advertisers began cutting ties with his show after he called white supremacy a "hoax," had in the prior days and weeks escalated his own race-baiting rhetoric again. He was accused of "hate speech" after appearing to echo the infamous white supremacist "14 words" slogan: "We must secure the existence of our people and a future for white children."

Following the host's original July 13 announcement, Salon took up an intrepid investigation into other Fox News personalities who have taken conspicuously timed "vacations" over the years.

Carlson has, in some senses, been riding high after returning in the highest cable news ratings in history the previous month and drawing speculation about a possible presidential run. At the same time, he was the subject of a recent IRS criminal complaint, as well as an ongoing high-profile defamation lawsuit, also filed against the network in a New York federal court.

The latest suit did not deter Carlson from returning to the air Monday. In his first show since the pre-planned interregnum, Carlson attacked The New York Times for allegedly preparing to publish a story which would reveal the location of his house. Carlson suggested that the move would endanger the lives of his wife and children.

The harassment allegations against Carlson stem from a December 2018 installment of "Tucker Carlson Tonight" featuring Cathy Areu, then a frequent guest of the program.

At the end of Areu's segment, an unnamed producer or writer whispered in her ear to stay put until the program was off air, according to the complaint. She claimed that no one in the crew would disconnect her microphone and earpiece on set, making it impossible for her to leave.

When the show wrapped, Carlson allegedly invited Areu to his hotel room, specifying that his wife would not be present. Areu claimed that Carlson cut her appearances when she refused, featuring her three times in 2019 and zero times in 2020.

A producer said the Fox News host personally reviewed and rejected proposals to have Areu on his show despite the fact that her segments were among the most popular, per the filing.

The suit's most graphic allegations come from Eckhart, a former associate producer at Fox Business, who accused Henry, the former co-anchor of "America's Newsroom," of rape and other forms of sexual violence. Areu also filed sexual harassment claims against Henry, as well as Hannity and the "Media Buzz" host Howard Kurtz. The four men have also been sued in their individual capacities.

The legal complaint was itself so graphic in nature that it included a trigger warning: "This document contains contains highly-graphic information of a sexual nature, including sexual assault." It goes on to detail Henry's alleged attempts to groom Eckhart, who claims she was asked to be his "little whore" and "sex slave." Henry allegedly threatened Eckhart with punishment and retaliation if she did not comply with his demands.

Eckhart alleged that she was ultimately "violently raped while helpless and restrained in metal handcuffs" as Henry "performed sadistic acts on her without her consent that left her injured, bruised and battered with bloody wrists."

The suit claimed that Henry had earlier forced Eckhart to perform oral sex on him — on network property — before raping her at a hotel where Fox often hosted visiting employees, "thereby facilitating, whether knowingly or unknowingly, Mr. Henry's conduct."

Yet another text to Eckhart allegedly read, "Good long session last time left you bruised battered dazed sated begging for more." He appended the tweet with the hashtag "#perfect."

Henry allegedly abused Areu with "a slew of wildly inappropriate sexual images and messages" for several months this year, according to the court document. The texts, which Areu allegedly retains, include "a 'closeup' photograph of a woman's vagina being 'clamped' closed by four clothespins" and a video titled "Fastest Interview ... candidate selected in 3 seconds."

According to the complaint, the video featured a woman job candidate exposing her vagina to the interviewer, who then selected her for the job. Immediately after Henry sent the video, he allegedly texted Areu: "Are you avail for anchor interview."

The filing alleged that the network did not take substantive disciplinary action against Henry, but instead rewarded him with a promotion to co-anchor on "America's Newsroom," as well as a streaming show on Fox Nation. Additionally, the suit claimed that HarperCollins, a Fox-affiliated imprint, signed Henry to a lucrative book deal.

When Fox News took action against Henry ahead of the lawsuit, the network allegedly did not inform Eckhart, leaving her to learn the news on Twitter and in press reports, according to the filing.

"It's heinous to do that to a victim like this — to force her to see him all over the news," Willemin told Salon.

Fox News issued a statement Monday denying Areu's allegations against anyone other than Henry, based on "the findings of a comprehensive independent investigation." The statement also suggested that Eckhart and Areu lack standing to sue the network for Henry's behavior.

"We expect Fox News to claim – as it almost always does – that an 'independent' investigation found no evidence of wrongdoing," said Wigdor, who in 2018 settled claims brought by more than 20 individuals against the network, including allegations against disgraced former star anchor Bill O'Reilly and former CEO Roger Ailes.

Wigdor said that the network's investigation did not include interviews with either woman, who both offered to meet under "reasonable conditions." He called on Fox to interview them in the name of public transparency.

"Fox News would have the public believe that it is a different place from the Fox News that was run by former disgraced Chairman and CEO Roger Ailes," the complaint's first paragraph read. "Unfortunately, it is actually worse."

In the spring of 2018, just before former network host Shep Smith departed on his own vacation amid a squabble with the network's primetime lineup, he told colleague Chris Wallace during on-air banter that everything would be "peachy-keen" on his return.

"Going to take a one-week vacation that was previously planned, and be back in a week, and everything will be peachy-keen and hunky-dory," Smith said. "I can't wait."

You can read the full complaint here.