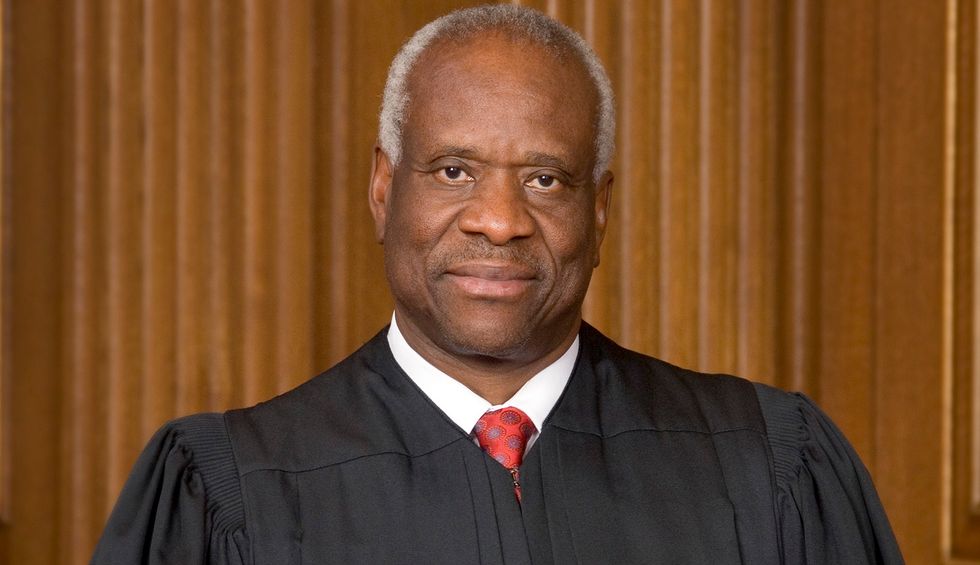 During his 29 years on the U.S. Supreme Court, Justice Clarence Thomas has never made a secret of his total disdain for the High Court’s ruling in Roe v. Wade — the 1973 decision that legalized abortion in all 50 states. And recent assertions from the 72-year-old Thomas make it clear that he hasn’t softened his views one bit when it comes to the legality of abortion.

Thomas was among the dissenters in the High Court’s 5-4 ruling in June Medical Services v. Russo. Handed down on Monday, June 29, the ruling struck down a Louisiana anti-abortion law that required doctors who perform abortions to have admitting privileges in a nearby hospital — and much to the dismay of far-right culture warriors, Chief Justice John Roberts sided with Justice Ruth Bader Ginsburg and other liberals in the decision.

Critics of the Louisiana law argued that it was a violation of Roe v. Wade. But as Thomas sees it, the Roe ruling never should have been made in the first place.

In his dissent in June Medical, Thomas wrote that legal abortion is “without a shred of support” in the U.S. Constitution. Thomas wrote, “Our abortion precedents are grievously wrong and should be overruled. The idea that the Framers of the Fourteenth Amendment understood the Due Process Clause to protect a right to abortion is farcical.”

Thomas, in fact, has called for the High Court to reevaluate Roe. And if that happened, Thomas would no doubt love to vote in favor of overturning it.

On Wednesday morning, July 1, the Washington Post’s Robert Costa reported that Thomas is “privately seen by Trump’s aides as” the Supreme Court justice who is “the most likely to retire this year. While Thomas has not given any indication of doing so, the White House and Senate Republicans are quietly preparing for a possible opening, according to a White House official and two outside Trump political advisers who spoke on the condition of anonymity to discuss the private conversations.”

Thomas, however, has been dismissive of rumors that he is planning to retire. So, it is certainly possible that if Thomas’ health holds up, he will still be on the Supreme Court ten or 15 years from now. Ginsburg, now 87, is 15 years older than Thomas.

It isn’t hard to understand why social conservatives and the Christian Right hold Thomas in such high regard. In contrast to former Justice Anthony Kennedy — a Ronald Reagan nominee and right-wing libertarian — Thomas has been an unyielding culture warrior. Kennedy had a fiscally conservative voting record, but he often sided with the High Court’s liberal wing when it came to abortion and LGBTQ rights.

Kennedy and Thomas disagreed many times. Kennedy wrote the majority opinion in Lawrence v. Texas, the 2003 decision that struck down a Texas sodomy law and was hailed as a victory for gay rights; Thomas was a dissenter and had no problem with an anti-gay law being on the books in Texas. And when Kennedy wrote the majority opinion in 2015’s Obergefell v. Hodges — which, in effect, legalized same-sex marriage nationwide — Thomas dissented.

Thomas also disagreed strongly with Kennedy in 2016’s Whole Woman’s Health v. Hellerstedt, a decision that was similar to June Medical and struck down a Texas law similar to the one in Louisiana. The High Court ruled that the Texas law placed an unreasonable burden on women seeking abortion services, but in Thomas’ view, the protections of Roe v. Wade never should have existed to begin with.

Like Obergefell v. Hodges and Lawrence v. Texas — or 1965’s Griswold v. Connecticut, which struck down a ban on contraception use by married couples in Connecticut — Roe v. Wade was a right-to-privacy decision. And as Thomas sees it, there is no right to privacy in the U.S. Constitution. A fundamental difference between Kennedy and Thomas is that unlike Thomas, Kennedy believed strongly in upholding right-to-privacy decisions. But now that Kennedy has been replaced by Justice Brett Kavanaugh and social conservatives dominate the Supreme Court, the future of Roe v. Wade hangs in the balance.

Abortion rights activists are hoping that Roberts, judging from his ruling in June Medical, would vote to uphold Roe. But there is no guarantee that Roberts wouldn’t agree with Thomas that Roe was wrongly decided 47 years ago.

One thing is for certain: if the Supreme Court does decide to reevaluate Roe v. Wade and Thomas is still a justice, he would be guaranteed to vote in favor of striking the decision down.