American fascism has arrived, and the danger is real — but it's not too late to defeat it 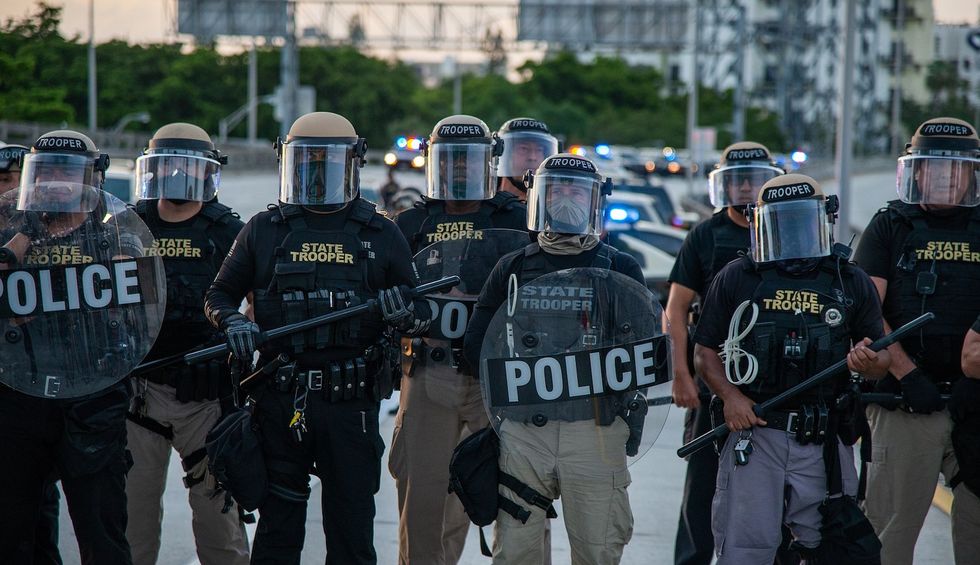 Ever since the beginning of the Trump crisis, I've written about Donald Trump's obvious fetish for authoritarian dictatorships and how observing our nation's most despotic president is an ongoing exercise in waiting for the other tyrannical shoe to drop.

Following the jackbooted nincompoopery of the Trump White House, as I've said multiple times before, is a lot like leaning too far back in our chairs and almost falling over backward — but catching ourselves at the last minute. Every day brings with it new devilry violently propelled from Trump's twisted tennis-ball machine of awfulness, keeping the entire nation perpetually off balance.

Trump's lack of personal restraint, combined with his complete inability to understand or respect democratic institutions, along with his obvious sociopathy and admiration for overseas villains like Vladimir Putin and Rodrigo Duterte, were always destined to fuse at the cellular level in harrowing ways, especially if he were tested by a national or global calamity.

And here we are. In the past several weeks, as the coronavirus death toll draws close to 150,000 while demonstrators take to the streets, the other shoe has officially dropped, exposing Donald Trump as the first American fascist to occupy the White House. I don't write this lightly or colloquially: Trump is our first fascist president, and the people who continue to enable him, be they his staff or his accomplices at OAN or Fox News or on Capitol Hill, ought to be viewed as sympathizers to his version of strongman ultranationalism.

Trump's policies have always been racing at ludicrous speed toward American fascism, and now, during the most horrendous global crisis since World War II, he's fully embracing the worst-case scenario — the thing many of us have warned about since 2016.

The age of American fascism has arrived. The dangers are immeasurable.

As soon as Trump chose to unleash federal stormtroopers in reaction to protesters, deploying an army of faceless thugs into American cities armed with allegedly non-lethal weapons, the Rubicon was crossed. There's no going back until, at the very least, Trump is ousted from power and held accountable for the unconstitutional horror show he's manifested. We'll circle back to this.

Fascism, derived from Benito Mussolini's political stranglehold on Italy, generally possesses the characteristics of hyper-nationalism, opposition to socialism and communism, suppression of dissent, an ideology of racial supremacy and the vilification of "the other" — foreigners, minorities and other groups, often rounded up and virtually disappeared into government internment camps.

Trump's entire campaign for president began with the demonization of Latino immigrants and, after his inauguration, segued into mass incarceration of entire families, including infants and small children, with myriad reports of sexual assault against both adult women and underage girls. He routinely frames moderate Democrats like Joe Biden as full-blown commies. He's labeled the American news media as enemies of the people. And no one would argue that he expresses obvious, if dunderheaded, ultranationalism.

Now, on top of all that, he's turning ICE and other paramilitary forces against American citizens. At his command, activists are being assaulted, injured and disappeared for the ffenseo of exercising their First Amendment free speech and assembly rights. Whatever acts of petty vandalism may be taking place, Trump has publicly described the "walls" of moms and veterans, along with other groups, as "lamestream media" scams, offering up more propagandized excuses for assaulting constitutional liberties.

There wasn't any graffiti being sprayed nor statues being toppled when Trump and Bill Barr ordered their foot soldiers to tear-gas the crowd at Lafayette Park on June 1, so the president could stage his awkward photo-op holding a Bible he's never read. Incidentally, the following maxim has been playing on an endless loop in my head: "When fascism comes to America, it will be wrapped in the flag and carrying a cross," and I'd wager I'm not alone. Fascism is here and it looks exactly like that — flanked by Lee Greenwood anthems and bogus religious imagery.

It doesn't matter how much graffiti is sprayed or how many Confederate statues fall, the federal government was never intended to exercise police powers inside our borders. Yet the party of alleged "small government" is ignoring all that. In the past, many of our most conservative 10th Amendment scholars have noted that police power is reserved for the states. (For instance: Read this, from the libertarian Cato Institute's "Handbook for Congress.") And yet every day, new videos emerge of Trump's stormtroopers brutalizing unarmed Americans, be they 14-year-old girls, Navy veterans or women daring to brandish flowers. Indeed, Republicans have abandoned their claim to states' rights and libertarianism. No more. Not when their fascist messiah is ordering children beaten by his shock troops. The Republican Party, like Trump, is utterly devoid of core values now, lost forever in a cloud of pepper spray and throat-constricting gas.

Jason Stanley, author of "How Fascism Works: The Politics of Us and Them," said in a recent interview that Trump isn't intrinsically fascist — instead, he's "performing fascism," which is almost as terrible. Trump, as many have noted, doesn't possess any core values, be they fascist or miscellaneous. That said, he certainly possesses a lizard-brain fight-or-flight instinct and knows how to co-opt behaviors to suit his ass-saving agenda. Whether his actions reflect his personal sense of right and wrong doesn't really matter. The overall effect is that of a fascist dictator beating the opposition into submission while suppressing critical speech. And like good fascist enablers, his Red Hat loyalists are cheering it along.

Of course Trump's fanboys are unwaveringly supporting the fascism of their Mad King, keeping his polling approval averages in the low 40s, even as he invades and indefinitely occupies what he considers to be opposition strongholds — the cities of the "Radical Left." There's no exit strategy and in fact Trump has publicly threatened to send in more goon squads to accompany his Nixon-derived "law and order" campaign plank. (By the way, Trump also stole "Make America great again" from Ronald Reagan. He steals a lot, including taxpayer money — an idea he stole from Putin, his kleptocratic paymaster.)

The clear ascendancy of fascism inside the White House is unprecedented and therefore the response must be equally without precedent. If Trump is ousted in November — and he must be ousted — he and his sympathizers must face the legal consequences of their actions so that it never happens again. Not here. There must be ramifications for what they've done to our country.

Naturally, the Red Hat entertainment complex will scream and whine and play the victim like always. So what. Fascism, in whatever form, has to be crushed before it crushes us. On the other hand, a second Trump term will fully metastasize it, ending our democratic republic as we know it. Put it this way: If we do our jobs as citizens of a free republic, Trump and his co-conspirators will have to start thinking about late-night escape routes to non-extradition nations. And the sooner we recognize the true nature of what's happening right now in America, the sooner the perpetrators will face commensurate repercussions.