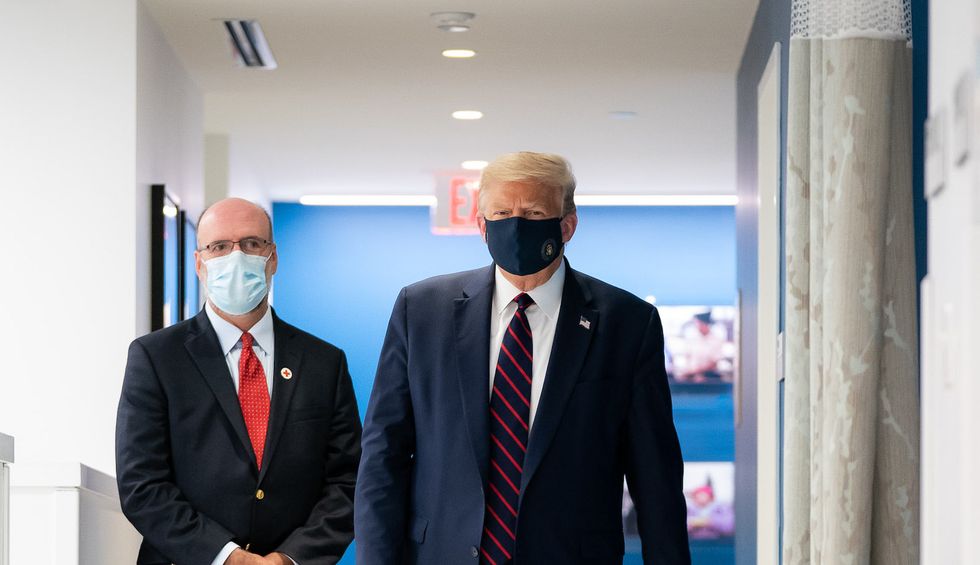 There have been a lot of changes in Donald Trump's campaign in the last couple of weeks, but they haven't been able to change the candidate. He's more Trumpy than ever.

When the last round of terrible polls were released, showing Trump badly trailing Joe Biden both nationwide and in the key battleground states, Kellyanne Conway and others inexplicably suggested that the president should reignite the dumpster fire formerly known as the coronavirus briefings. That's not going well. Have they been as bad as the White House coronavirus rallies in the spring, where Trump spent what seemed like hours every day insulting the press corps and generally making a fool of himself? Not yet. But that's only because he has managed to stick to answering a few questions after droning on for 20 minutes as if he were reading someone else's book report.

The substance of that book report is the same old happy talk and cheerleading, virtually always based on half-truths and outright lies. And the Q&A period is predictably a disaster. One day he wished his old friend Ghislaine Maxwell, the accused sex trafficker, well, spurring speculation that he was sending her the kind of signal he had earlier sent to his pal Roger Stone, whose sentence he commuted after Stone made clear he hadn't ratted him out. (Perhaps that's unfair, but since Trump commonly says things that sound like a slightly less erudite Tony Soprano, it's only natural to wonder.)

When it comes to dealing with the pandemic, Trump just keeps stepping in it, regardless of what's in his prepared text. This week he came close to reprising the memorable moment when he asked the scientists to look into using disinfectant to clean out people's lungs, since it cleans countertops so well. Responding to what was reportedly a coordinated campaign to push hydroxychloroquine, his favorite miracle cure, the president endorsed a quack doctor who has a history of making bizarre claims, including a belief that doctors are injecting alien DNA into their patients and that various reproductive disorders are the consequence of "dream sex" with witches and demons. He said he was very impressed by her.

If Trump actually allowed his public health officers to run the briefings, he might get credit for having a competent professional administration, but he cannot tolerate anyone else getting the attention. In fact, this week featured perhaps the most immature whine he's ever delivered, and that's really saying something:

He simply cannot grasp that his performance during this pandemic has shown him to be incapable of handling a crisis, which is the single most important duty of the president. Nor is he willing to delegate the task to others, which makes his embarrassing incompetence all the more conspicuous. And he seems not to understand that his reckless flailing in pursuit of something that might aid his dwindling chances of re-election is entirely transparent.

Trump at the podium spewing misinformation to the public isn't the only problem. The policies that have been pursued by his administration are blatantly corrupt. Katherine Eban at Vanity Fair reported on a previously unknown shocking decision made back in April.

We knew that there were various people working on the same issue on separate tracks in the White House. There was the official coronavirus task force, the recently revealed political group that met privately in chief of staff Mark Meadows' office, and the notorious Jared Kushner task force that operated completely independently.

According to Eban, Kushner's group of whiz kids actually worked up a somewhat sophisticated and comprehensive national testing and tracing program all the way back in April:

Rather than have states fight each other for scarce diagnostic tests and limited lab capacity, the plan would have set up a system of national oversight and coordination to surge supplies, allocate test kits, lift regulatory and contractual roadblocks, and establish a widespread virus surveillance system by the fall, to help pinpoint subsequent outbreaks.

Who knows if their plan would have worked? This is the Trump administration after all. But the people involved were under the impression that it had been approved and that the president would announce it in a Rose Garden briefing in early April. Obviously, that didn't happen, and the reasons it didn't are appalling.

As we know, the president never wanted to do a lot of testing because he didn't want to see "his numbers" go up, so he was no doubt reluctant from the beginning. During this time he was obsessed with the stock market and the economic cost of the shutdowns, which he believed were hurting his re-election chances. This was right around the period when Dr. Deborah Birx was passing around her optimistic models showing that the virus was rapidly running its course.

But this is a new detail:

[B]ecause the virus had hit blue states hardest, a national plan was unnecessary and would not make sense politically. "The political folks believed that because it was going to be relegated to Democratic states, that they could blame those governors, and that would be an effective political strategy," said the expert.

In other words, the Rube Goldberg system that has allowed the virus to surge all over the country resulting in millions of cases and more than 150,000 deaths was understood months ago to be unworkable. But people close to the president of the United States believed that the virus would be confined to states that don't vote Republican, so letting those people get sick and die was smart politics.

I wish I could say that this is too awful to be believed, but let's recall that Senate Majority Leader Mitch McConnell clearly stated that he didn't want to enact a "blue-state bailout" to ease the economic pain of states hit hard by the coronavirus. So this line of thinking wasn't confined to the White House.

Obviously, these people have since gotten schooled as to the reality that the virus isn't confined to blue states or big cities, and it's now hitting their own voters hard. Indeed, as the Washington Post reported, that's what persuaded Trump to start talking about the crisis again after many weeks of pretending it wasn't happening.

But Trump's commentary about the pandemic is making things worse, as always. He erroneously insists that kids are immune, that most of the country is doing great and that a vaccine will be available any day now. (In an extremely optimistic projection, there could be a vaccine in place by January, although there's no guarantee it will be universally available or effective.) The testing system the Trumpers thought wouldn't hurt "their people" is once again failing miserably as people have to wait for weeks to get results, and the nationwide surge is so widespread that contact tracing is almost useless anyway. Most of this is happening in red states that followed Trump over the cliff like a bunch of lemmings back in the spring when he told them the virus was going away and it was safe to reopen damn near everything.

Trump and Kushner could have come out of this looking like heroes — which would obviously have benefited the president's odds of re-election — but they decided to play vindictive, divisive politics instead. But who knows? Maybe Trump will get lucky and that miracle cure will arrive any day. Maybe, as he's been saying from the beginning, this virus will just disappear overnight. That's really all there is to Trumpian politics at this point: punishing their enemies and magical thinking.