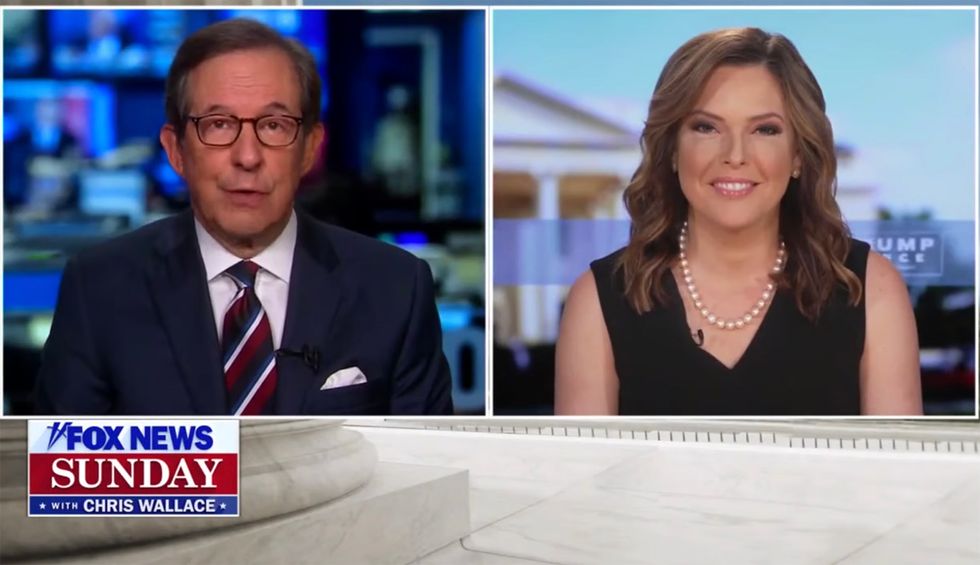 On his Fox News Sunday program, Wallace noted that President Donald Trump’s Tulsa rally on Saturday had been sparsely attended despite the fact that the president claimed nearly a million people had requested tickets.

“We all saw the pictures last night,” Wallace explained. “The arena was no more than two-thirds full. And the outdoor rally was cancelled because there was no overflow crowd. What happened?”

“The key here is to understand,” Schlapp replied, “there were factors involved, they were concerned about the protesters who were coming in.”

“He talks about how he can fill an arena,” Wallace said, referring to the president. “And he didn’t fill an arena last night. You guys were so far off that you had planned an outdoor rally and there wasn’t an overflow crowd.”

“Protesters did not stop people from coming to that rally,” he added. “The fact is, people did not show up.”

“Mercedes, please don’t filibuster,” Wallace interrupted. “Frankly, it makes you guys look silly when you deny the reality of what happened.”

“I don’t know why you are saying that,” Schlapp complained.

“There are empty seats there,” Wallace replied. “At least a third, if not half of the rally was empty. You can’t deny it.”

“Joe Biden has been a failed politician that has done nothing but support failed institutions,” Schlapp opined. “This is in contrast with President Trump who has a strong record and is rebuilding this economy.”

“Mercedes, you’re shifting to a campaign speech, which has nothing to do with the attendance of the rally,” Wallace observed.

Watch the entire interview below from Fox News.

'What are we doing here?' Judge scolds Trump attorney for failing to prove search was unlawful

Watch: Ex-acting ICE director calls for mass arrests and a government shutdown over the southern border