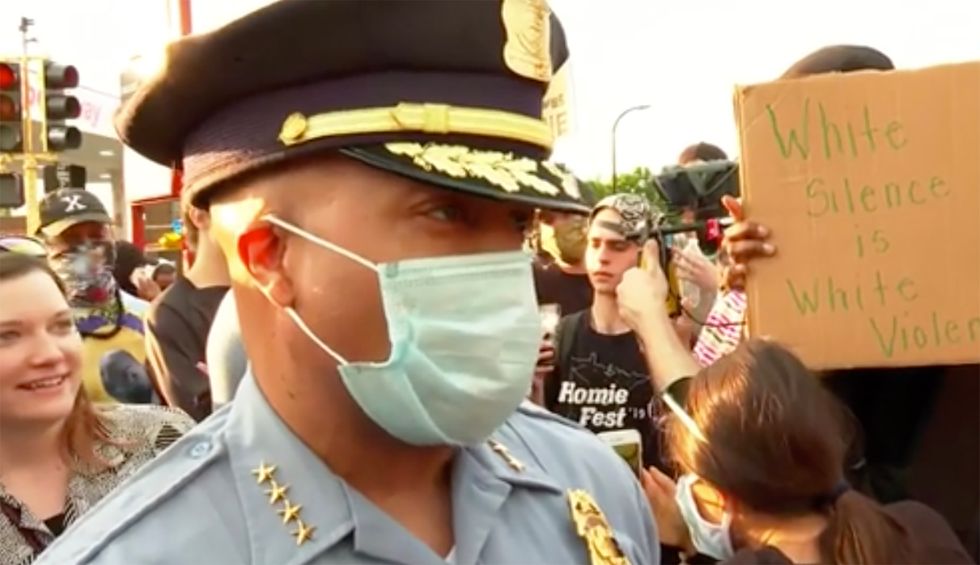 Although all four of the Minneapolis police officers involved in the death of George Floyd on Monday, May 25 have been fired, only one of them has faced criminal charges so far: Derek Chauvin. But Minneapolis Police Chief Medaria Arradondo, according to CNN, is asserting that all four of them bear responsibility.

Arradondo, who became the city’s first black police chief in 2017, told CNN, “Mr. Floyd died in our hands, and so, I see that as being complicit. Silence and inaction, you’re complicit. If there was one solitary voice that would have intervened.... That’s what I would have hoped for.”

Chauvin is the officer who, in disturbing videos, can be seen with his knee on Floyd’s neck while he was handcuffed and pinned to the ground and pleaded, “I can’t breathe” — and he has been charged with third-degree murder and second-degree manslaughter. Arradondo is by no means the only one who has said that all four officers bear responsibility: last week on Fox News, for example, Judge Andrew Napolitano (a right-wing libertarian who sometimes sides with the left on civil liberties issues) asserted that all four of them should face murder charges.

Arradondo described Floyd’s death as a “violation of humanity.” The Minneapolis police chief told CNN, “There are absolute truths in life. We need air to breathe. The killing of Mr. Floyd was an absolute truth that it was wrong…. I did not need days or weeks or months or processes or bureaucracies to tell me what occurred out here last Monday was wrong.”

Floyd’s death has been followed by large protests all over the country — and the “overwhelming majority” of protestors, the Rev. Al Sharpton stressed on MSNBC on May 31, have been “peaceful.” But U.S. cities have also been rocked by the worst civil unrest since the L.A. Riots of 1992, with violence and looting occurring everywhere from Los Angeles to Atlanta to Philadelphia to Chicago.