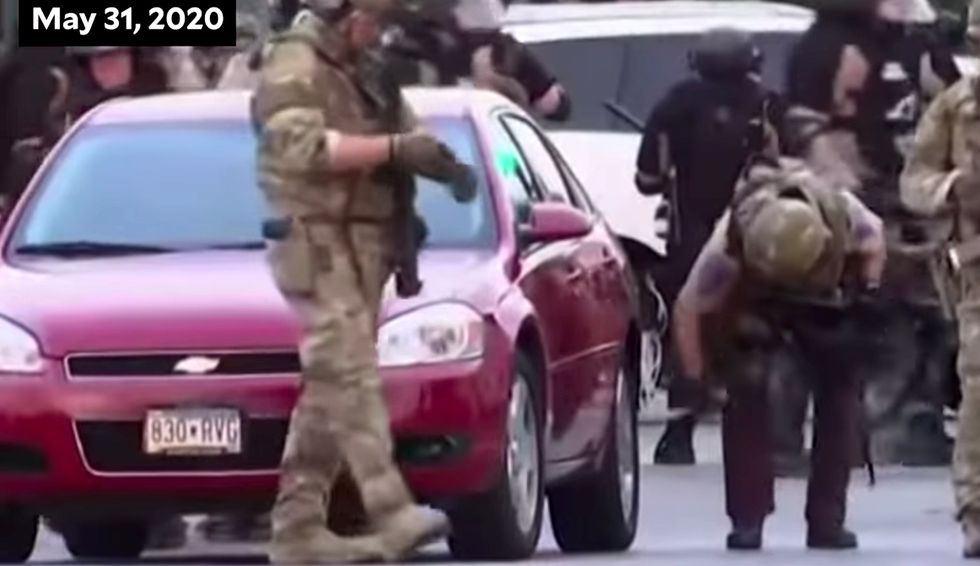 As protesters hit the streets night after night last weekend and reporters followed to cover the events, law enforcement agencies went out to do their own type of vandalism: slashing and puncturing people’s tires. Mother Jones has published a video collection showing these brave American law enforcement apples systematically destroying reporters’ and protesters’ vehicles. “In the videos, officers puncture tires in a K-Mart parking lot on May 30 and a highway overpass on May 31. Both areas briefly turned into police staging grounds near protest hot spots.”

The Star Tribune says it has identified two law enforcement agencies as the perpetrators of this fascistic brand of vandalism. They’re state troopers and deputies from Anoka County. Sheriff’s Office Department of Public Safety spokesman Bruce Gordon acknowledged the tire slashing and told news outlets: “State Patrol troopers strategically deflated tires [...] in order to stop behaviors such as vehicles driving dangerously and at high speeds in and around protesters and law enforcement.”

But spokesman Gordon also said that some of these tires were no angels. “While not a typical tactic, vehicles were being used as dangerous weapons and inhibited our ability to clear areas and keep areas safe where violent protests were occurring.” Los Angeles documentary and television producer Andrew Kimmel told reporters that his vehicle had also been targeted, as had every single car parked at the Kmart that day and night. Kimmel says he has covered over 100 protests and “I’ve never seen the tire slashing before, particularly in a parking lot."

Now this is weird. Someone pointed out to us all that of the cars in the Kmart parking lot at Nicollet and Lake St.… https://t.co/qRd4SwwCku
— Jeff Wagner (@Jeff Wagner)1590895373.0

Minneapolis Police slashed every tire on my rental car, as well as every tire of every car in this parking lot. https://t.co/lchFplYQ0n
— Andrew Kimmel (@Andrew Kimmel)1590908245.0

You can watch this fascistic bit of madness below.