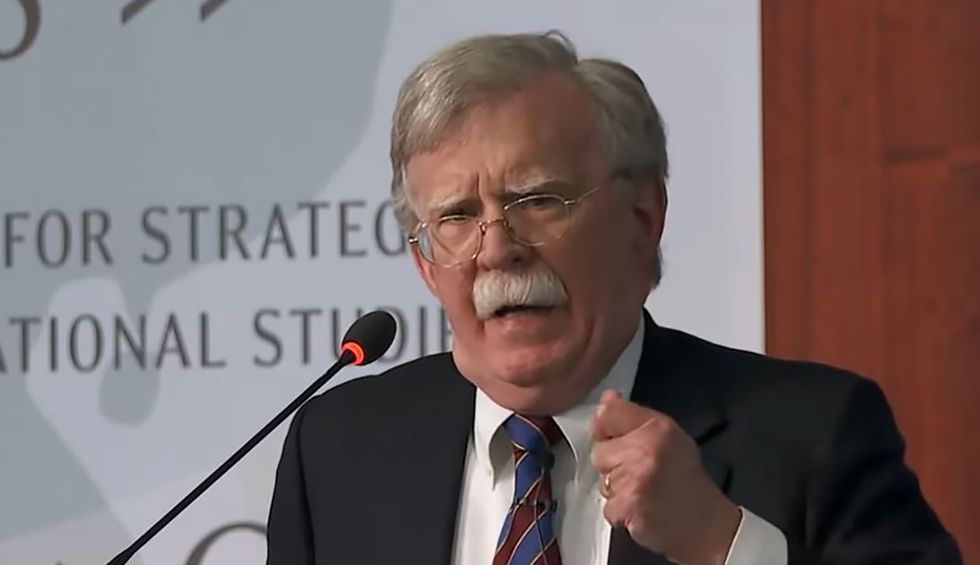 President Donald Trump on Monday claimed that any conversation between himself and former National Security Advisor John Bolton is "highly classified," threatening his far-right former top advisor with "criminal liability" if he puts out a book detailing his time working in the administration without authorization.

The remarks came during a press availability at the White House and followed news reporting that the administration is ready to file for a federal injunction against Bolton—as early as Monday afternoon—to block publication of his forthcoming book, titled "The Room Where It Happened."

Trump told reporters that he has already said to U.S. Attorney General William Barr, who was also in the meeting, that he considers "every conversation with me as president as highly classified. So if the book gets out, he's broken the law and I would think that he would have criminal problems. I hope so," Trump said.

"Maybe he's not been telling the truth," added Trump, a serial liar, of Bolton without any seeming sense of irony. "He's been known not to tell the truth—a lot."

Trump said that "a lot of people are upset" with Bolton for writing the book and referred the question to Barr.

President Trump on John Bolton: "Even conversations with me they're highly classified. I told that to the Attorney… https://t.co/0osliS6geE
— CSPAN (@CSPAN) 1592253556.0

In his remarks, Barr said that he does not believe Bolton has completed the verification process for the book and is therefore in violation of government agreement he signed when departing from his job at the White House.

While progressives have denounced Bolton for his blood-thirsty foreign policy views and hawkish invectives against a more peaceful world, curiosity about what the former diplomat might spill about what he claims to have witnessed when advising Trump remains. On Monday, ABC News' Martha Raddatz announced she had secured an interview with Bolton, calling him "the man the president doesn't want you to hear."

As for the book, many opposed to Bolton's grotesque influence on domestic policy and the world stage urged people over the weekend not buy the tell-all memoir, but to wait and see how Trump squirms when it comes out.

"There are many ways to be complicit in the Trump administration's corruption," tweeted former director of the Office of Government Ethics Walter Shaub late last week. "One way is to buy Bolton's book."