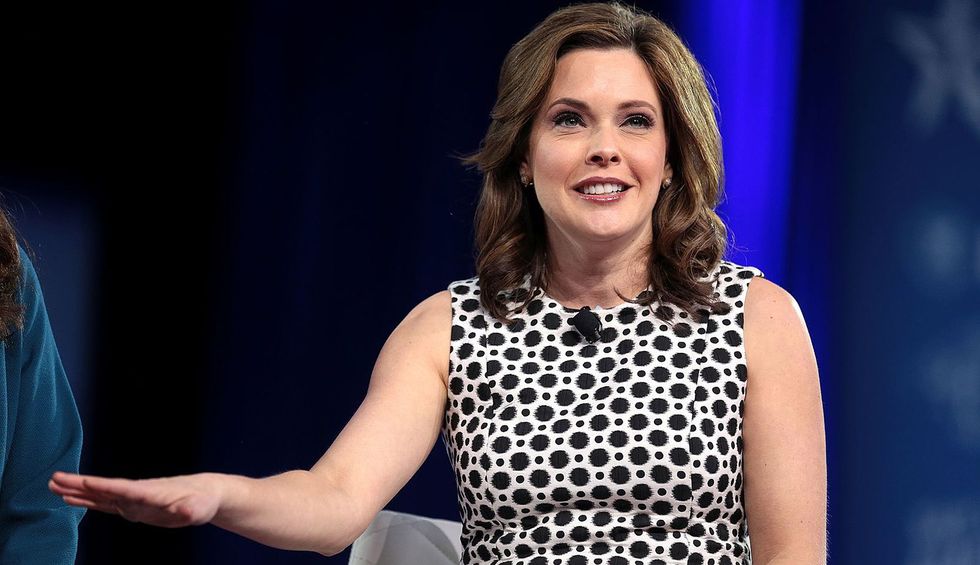 Both Donald Trump himself and his various campaign remoras and hangers-on have not been shy in their efforts to push supporters into vigilanteism, in response to nationwide protests, but senior Trump campaign adviser Mercedes Schlapp was as overt as she could possibly get last week when she retweeted a post lauding a Texas man threatening peaceful demonstrators with a chainsaw while shouting a racial slur.

After Politico inquired as to (ahem) what the hell was up with that, Schlapp backpedaled. But only sort of, because she, like everyone else on Trump's campaign, still can't be brought to be anything better than a deplorable.

As reported by Politico, upon their inquiry as to why Schlapp would share a video of a man threatening peaceful demonstrators with a chainsaw while shouting the n-word at people, Schlapp responded by retweeting a different version of the video that muted out the slur. Then she deleted both, and allegedly(?) issued an apology of sorts: “I would never knowingly promote the use of that word. This is time for healing the nation and not division.”

You will note, dear reader, that she was self-aware enough to claim to be offended at the obvious racial slur. Threatening to murder people who protest against Trump's authority, though, now that's just your average weekday. That is all she was trying to support.

Divisive: Yelling n---- at people. Not divisive: Threatening them with a chainsaw because they're holding cardboard signs in the general vicinity and you don't like it.

As for the man in the video, he was booked on four counts of deadly conduct and one of assault.

And Schlapp? She quickly moved on from her praise for a violent, racist nutcase, returning to her usual attacks on Trump opponent Joe Biden, her promotion of "Catholics for Trump," and retweeting the Pope. As one does, after celebrating a man who jumped out of a truck to threaten passersby with a chainsaw while yelling about Black Americans and "antifa."

What can we say? Mercedes Schlapp was deplorable before deplorable was cool. That's why she's where she is today in the Republican Party: You've got to be a sociopath to so much as get in the door.