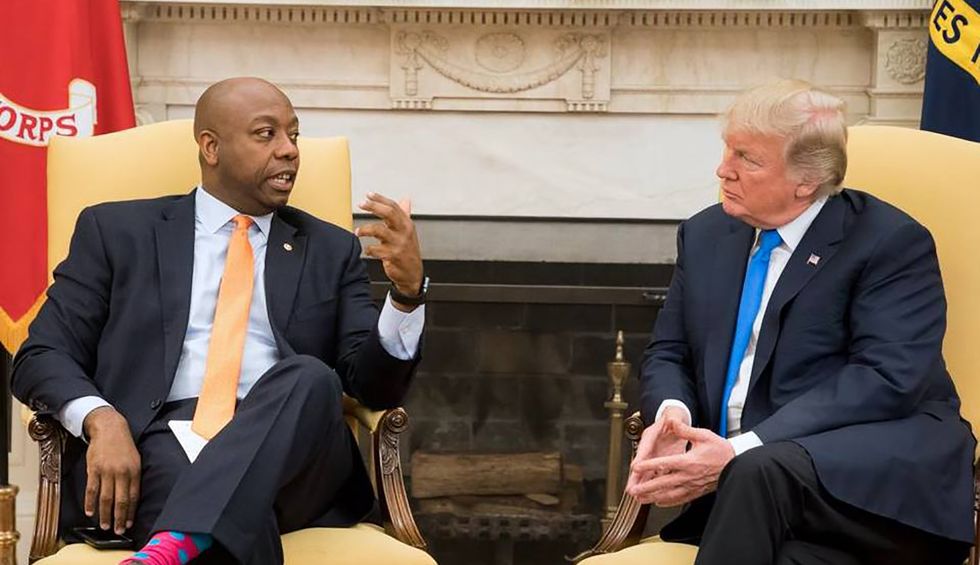 Sen. Tim Scott, the South Carolina Republican carrying the very heavy burden of being the only Black member of his conference, is the point man on writing the Republican response to the Democrats' legislation to end police brutality—the Justice in Policing Act of 2020. That puts Scott in a very tough spot as his leader, Sen. Mitch McConnell, is not going to let anything of substance pass.

"I don't think they're going to propose anything that comes anywhere near enough to what we need to do. We need systemic change," Sen. Tammy Duckworth, Democrat from Illinois told Politico. "If they propose systemic change then I'm fully supportive of it. But I wouldn't be surprised if it's more cosmetic." Scott's legislation isn't out yet, but Politico reports it will be "centered on better data reporting and new incentives for more judicious use of force at local police departments." In other words, entirely insufficient but what McConnell will allow. At this point, it looks like McConnell is going back to racist Republican tricks to pin any lack of action on police reform on Democrats and to paint them as crazy radicals intent on abolishing law enforcement. He proved that once again on Wednesday.

Sen. Chuck Schumer, the Democratic leader, attempted to do one simple thing on Wednesday: Have the Senate agree that when the House passes the Justice in Policing Act, the Senate would take it up. McConnell had Sen. Tom Cotton there on the floor to object, denying the unanimous consent to do the radical thing of voting on legislation. What's more, Cotton pulled the political stunt of proposing his own nonbinding resolution that says the Senate opposes calls to "defund the police" and calls for some unnamed and vague "justice" for George Floyd. Schumer objected.

"The great worry so many Americans have is that so many on the other side will feel rhetoric and then try to let this go away. We demand action, and we demand it now. Real action, not rhetoric," Schumer said in objecting to the Cotton's ploy. "The resolution by my friend will do nothing. Nothing. It is rhetoric," he added. Which is likely all that McConnell and team are willing to do. The chair of the Judiciary Committee and Scott's fellow Republican South Carolinian, Lindsey Graham, is happy to fuel the partisan fight. "There's some common ground if you want it. If you want to play politics we'll go nowhere. […] The first thing I want to do is find out: Are Democrats willing to work with us to find something?"

As it happens, Sens. Kamala Harris and Cory Booker have worked with Scott. Together they proposed the anti-lynching bill that Sen. Rand Paul is holding up, presumably with McConnell's blessing. While Democrats respect Scott and his efforts, they know very well what's going to happen here. "I respect Tim Scott because he’s lived it. But Mitch McConnell has a way of finding ways to sort of let the air out of the balloon without making change," New Mexico Democrat Martin Heinrich said. "That won't work this time around."

Booker, who along with Harris is a lead sponsor of the Democrats' bill, said what he's heard from Republicans thus far "is heavy on gestures and light on meaningful reforms that will root out the systemic injustices that are baked into our justice system and policing practices.  […] If we're serious about confronting police brutality and excessive use of force, this bill is not the solution." On that, the Democrats appear united.

"Just saying we've done something is not enough. We have to take this moment in history and make a significant change," Illinois Democrat Dick Durbin told Politico. "Just doing some kind of symbolic effort is not enough."