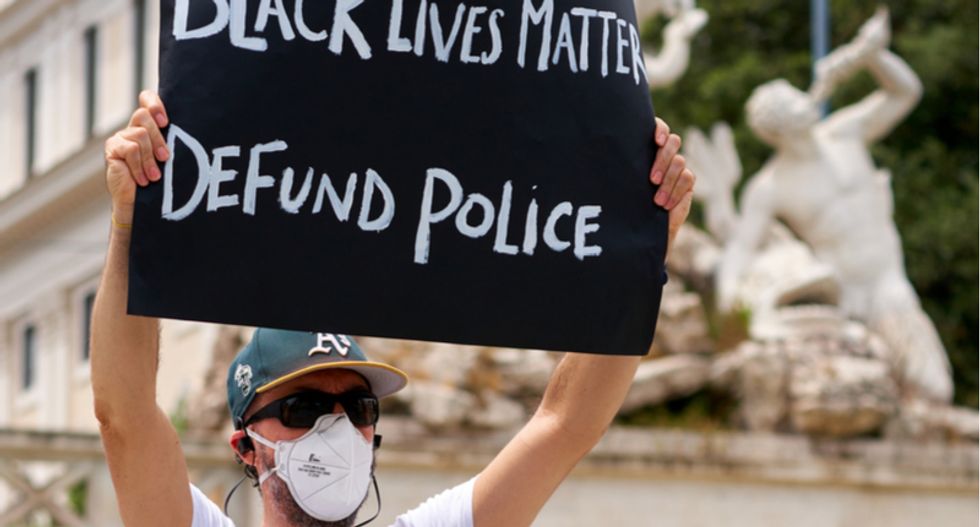 With activists and some Democrats calling to defund police agencies, we’ve reached the predictable point when pundits argue that this movement is going to sink Democrats in the fall elections. We’ve seen this movie before. This sort of thing always seems to happen when there’s a progressive idea that many conservatives and members of the pundit class don’t understand and believe to be radical, and it’s almost always the case that the doom they predict never comes to pass.

Defunding the police, despite how it sounds, is not about getting rid of the police. The idea is to divert some funding directed toward bloated police department budgets toward non-police responders--mental health professionals, substance abuse counselors, conflict mediators and the like--and to housing and other social services. As a result, fewer police would be needed, and they could focus on serious crimes rather than responding to a wide array of situations they’re often not trained for. Fewer police showing up to address non-criminal problems, means fewer opportunities for altercations between the police and the public, especially in communities of color.

Police spending has grown by around 445 percent over the last few decades even as violent crime has decreased over the same time period. According to an Urban Institute report from 2017, the U.S. spends around $115 billion per year on policing. NYPD has a budget of $6 billion alone. In Minneapolis, where George Floyd was murdered and the protests that spread nationwide began, over a third of the city’s budget was spent on policing in 2017. If some of that money were diverted to non-police programs, both the public and the cops would benefit. Most of them don’t want to be mental health experts or social workers.

Because many don’t understand what “defund the police” means and assume it’s a radical and absurd idea--or because they think people will start seeing all Democrats as anti-police--many pundits are claiming that the activist campaign is going to sink Biden’s candidacy and hurt Democrats down-ballot.

Political analyst Douglas Schoen wrote a piece for The Hill recently that the movement is playing “right into the hands of President Trump and will increase his chances to win the election this year.” Fox News contributor Marc Thiessen recently said that the election could become a fight between Trump’s ‘law and order’ campaign vs. a Democratic Party intent on eliminating cops, which would hand Trump a win in November.

The problem is that these people are almost always wrong. Douglas Schoen, for example, predicted in 2018 that Democrats like then-candidate Alexandria Ocasio-Cortez and Sen. Kirsten Gillibrand calling for abolishing ICE would doom the Democrats when the midterm elections came around. Gregory Wallace, another Hill contributor, said the same thing. In the end, activists and some Dems in safe seats stuck with “Abolish ICE,” those in swing districts didn’t and Democrats gained 41 House seats and took the majority.

The same things have been said about people on the left fighting for a $15 minimum wage, people calling for Medicare-for-All, a Green New Deal and other progressive ideas. The truth is that most people don’t vote against a candidate because some members of their party are pushing policies they don’t support. They vote for who they think the best candidate is, and that’s heavily influenced by partisanship and its corollary: hostility toward the other party. Moderate House candidates weren’t affected much by what candidates like Ocasio-Cortez were saying in 2018, and painting someone like Biden as a hardcore socialist or a police abolitionist isn’t particularly believable and likely won’t work in this election.

November will be a referendum on Donald Trump, and most people's opinion of his three-and-a-half years in office appear to be set. As CNN number-cruncher Harry Enten noted, Biden's lead over Trump over the past year or so has been the most stable in the history of modern polling. That's true despite Trump presiding over a strong economy for most of that period, and only losing a few percentage points of support as 114,000 Americans died of Covid-19 and 40 million more lost their jobs. (Democrats have also held a steady, 5-8 point lead in the generic Congressional ballot for the past year.)

As Alternet’s Joshua Holland explained recently, it makes sense for activists to have their own language for how they want to create change in this country and for more moderate candidates to have their own language for it. Biden has rejected the “defund the police” terminology but has embraced quite a few of the concepts it represents, which allows him to fight for reform without being painted as a radical. The idea that defining him as a “defund the police” revolutionary is going to work in November is patently absurd considering who we’re talking about.

There will always be progressive ideas that many won’t understand initially or will find to be extreme even when they do understand them, but these movements occurring in factions of the party aren’t going to ruin a moderate Democrat’s presidential campaign or the campaigns of other moderates vying for office this year, if the past is any indicator. Activists and progressive Democrats can call for defunding the police all they want, and the moderates who want to embrace parts of that ideology without mirroring their rhetoric will be just fine. But of course the party will always be in disarray according to the savvy pundit class.