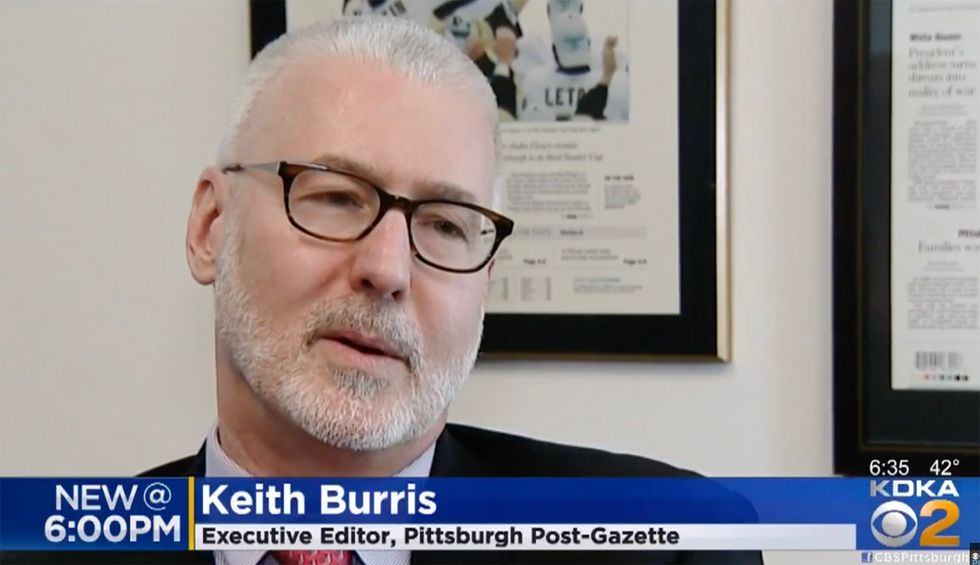 In a hardly unexpected response, an editor of the Pittsburgh newspaper who banned two Black journalists, among others, from covering protests about the death of George Floyd has chosen to rebuke criticism about the decision instead of apologizing.

”Let’s start with this,” Pittsburgh Post-Gazette executive editor Keith Burris wrote. “Editors at this newspaper did not single out a black reporter and a black photographer and ban them from covering Pittsburgh protests after the killing of George Floyd. And we certainly did not single out two people and keep them from covering local protests because they were black. That is an outrageous lie—a defamation, in fact.”

Burris went on to explain that he and management “assumed the lie was so outrageous that it did not need refutation.” “Here’s the truth: No one was taken off the protest story because of race,” Burris wrote. “One person was not assigned a story because of the suggestion of bias. A tweet was issued and a dialogue followed that editors felt was strong commentary—opinion—on a story the reporter was only supposed to report.

“This person was not taken off a story, but was never on it. And this person does not cover race or protests. There is no such beat. This person covers social media, normally.”

Yet and still, that nameless person, Alexis Johnson, and anyone who supported her tweet in question—including Pulitzer Prize-winning photographer Michael Santiago—were in practice taken off of protest-related coverage.

Burris used scathing language in defense of his selectively principled editorial decisions from “tragic fraud” to “simplistic and useless.” He drew parallels that aligned a tweet to a violation of the very principles of journalism.

In that tweet, by the way, Johnson seemed to mockingly point to a very real inequity between common media narratives about Black people and those about their white peers. “Horrifying scenes and aftermath from selfish LOOTERS who don’t care about this city!!!!! .... oh wait sorry. No, these are pictures from a Kenny Chesney concert tailgate. Whoops,” she wrote.

Then, the journalist got to live out the very inequity she seemed to mock. She told MSNBC’s Joy Reid that her white peer was warned about a social media post he sent but wasn’t then taken off of protest-related coverage. “In fact, he covered the protest the following day,” Johnson said.

Burris made no mention of that specific in his op-ed, but he defended the motives behind the ban as "purely journalistic" and refused to apologize for any wrongdoing in the matter. In fact, the closest he came to an apology was this section of his op-ed:

Did we fail to fully appreciate what the new civil rights movement means to a young black woman Did we miss the larger context of all that is happening in our country right now? As we attempted a teaching moment with a young reporter did we miss what could have been our own teaching moment? A reasonable person could make any one of those cases. But no fair person could make the case that our actions were race-based. And we will not apologize for upholding professional standards in journalism or attempting to eliminate bias.

Apparently, those professional standards only apply to the lowly journalists closest to the story and not the white editor given carte blanche to regurgitate his opinion all over the newspaper’s web edition.

Or as Burris puts it: “A journalist can be a commentator or a chronicler. He or she cannot be both at the same time. But whether he is a straight up reporter or an opinion writer he must, above all, seek to be fair and truthful.”

So in the spirit of fairness and truth, can I assume Johnson’s op-ed is on the way, or must she assign a “commentator” to tell her truth for her because a white man defined her as only “a chronicler?”