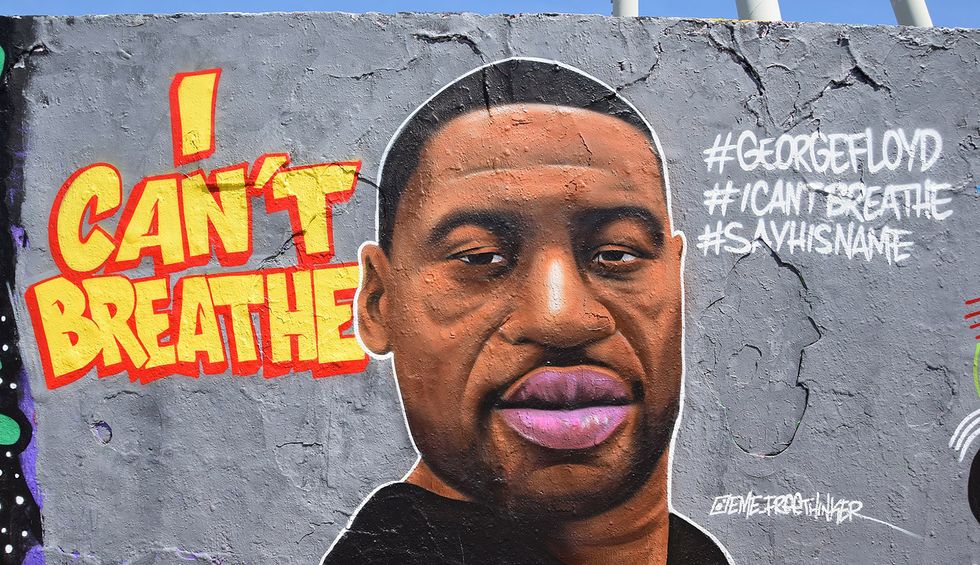 Mural showing the portrait of George Floyd in Mauerpark in Berlin. To the left of the portrait the lettering "I can't Breathe" was added, on the right side the three hashtags #GeorgeFloyd, #Icantbreathe and #Sayhisname. The mural was completed by Eme Street Art on 29 May 2020.
Alex Henderson
June 30, 2020

If President Donald Trump is reelected in November, he will do it with a lot of help from white voters — especially older white males in rural areas and small towns. But journalist David A. Graham, in a June 30 article for The Atlantic, asserts that Trump’s support among white voters is decreasing — and the top reason, Graham argues, is race.

“When video of the police killing of George Floyd first emerged, Trump condemned it,” Graham writes. “But he quickly reverted to his standard rhetoric, seeing a chance to exploit and exacerbate divisions over race. It’s hard to believe that anyone is surprised: while not every offensive Trump comment has reached the same wide audience or been interpreted the same way, the president’s most widely covered remarks have touched on race. What is different this time is the way people are responding.”

Many pundits have attributed Trump’s poor performance in recent polls to, among other things, the state of the U.S. economy and the president’s botched response to the coronavirus pandemic.

“Voters might be feeling bleak and turn against an incumbent at this moment for any number of reasons — just look around,” Graham explains. “A pandemic has killed nearly 130,000 Americans, with no end in sight. And the economy is in the deepest recession in decades, with millions out of work — also without a clear end in sight. But these are not the issues where Trump is hurting the most in recent polls.”

Race, according to Graham, has become the issue that is doing the most to move some white voters away from Trump and in the direction of former Vice President Joe Biden, the presumptive 2020 Democratic presidential nominee.

“As the political scientist Michael Tesler writes, there’s evidence of real shifts in public opinion on race over the past six weeks or so,” Graham observes. “While views on policing are moving in response to a wide range of incidents, it’s clear that the Floyd case — brutal, senseless and captured in excruciating clarity on video — has captured white attention in a way other deaths at the hands of police have not. One reason for that may be the coronavirus. Ashley Jardina, a political scientist who studies racial attitudes among white people, told me that she suspects because people are stuck at home due to the pandemic, they’re consuming more news and changing their views on race.”

Trump’s overall approval ratings have never been very high, but Graham notes that when it comes to race relations, they are especially bad now.

“The driving factor for Trump’s collapse appears to be race,” Graham writes. “Polls have consistently shown that Americans disapprove of his response to protests of police violence and believe that he has worsened race relations…. If reluctant Trump voters from 2016 are undergoing a change on their view of race relations, it could have seismic implications for his reelection.”