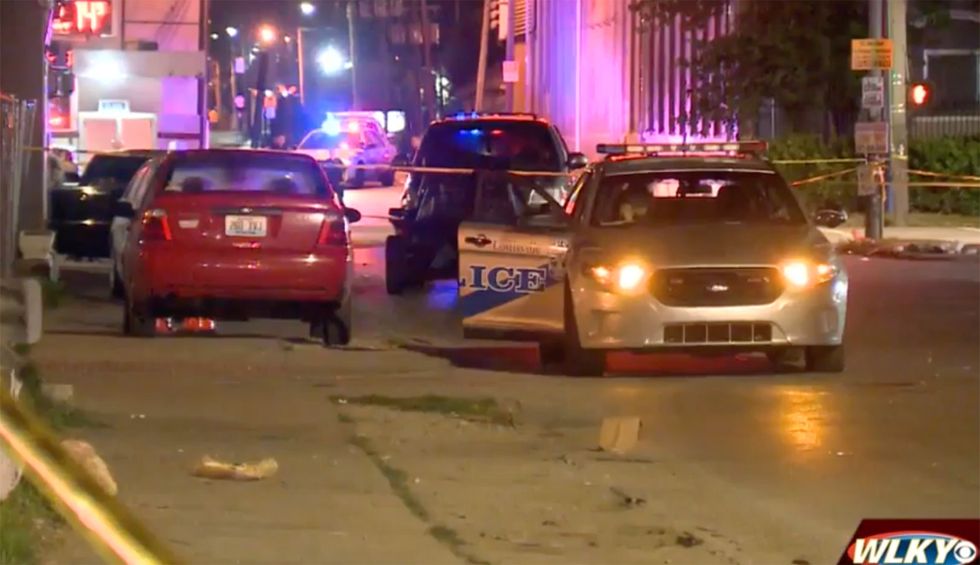 Just after midnight on Monday morning, David McAtee, the owner of a barbecue business in Louisville, Kentucky, was shot and killed by law enforcement officers. According to the the Courier Journal, McAtee’s popular barbecue business was located next to Dino’s Food Mart in Western Louisville. It was the site of a gathering crowd of people late Sunday night. Former Louisville Metro Police Chief Steve Conrad told reporters that when the LMP and National Guard showed up to break up the gathering, someone shot at them and McAtee was killed in the return of fire from law enforcement.

These details, however, are very slim, and many in the community want answers. What is known is that on Saturday, Louisville Mayor Greg Fischer implemented a 9 PM to 6:30 AM curfew. What is also known is that McAtee’s body was still at the scene, lying in the street, hours after the incident. Some reports say his body was moved inside for forensic investigation. A crowd had gathered at the site and McAtee’s mother, Odessa Riley, came down, asking to see his body and telling reporters: "Right now, I can't tell you the feeling I have. All I can say -- when a mother loses her child, a piece of you goes along with that child."

McAtee and others were reportedly gathered in the area—just as many groups of Americans have gathered across the country—protesting racial injustice and law enforcement violence against people of color. In April, Louisville police busted into 26-year-old EMT Breonna Taylor’s apartment and opened fire, shooting her at least eight times, killing her. The police were at the wrong place and their story has been contradicted by other evidence.

Odessa Riley told the Courier-Journal that her son was a pillar of the community: "He left a great legend behind. He was a good person. Everybody around him would say that. My son didn't hurt nobody. He didn't do nothing to nobody." She told reporters that police frequented her son’s barbecue and her son did not charge at them. “My son was a good son […] And they come along and they killed my son."

Metro Council President David James told the news that McAtee was a personal friend and “just a good, decent person,” who believed in and supported his neighborhood. “He’s just a great guy.” Gov. Andy Beshear released a statement saying he had “authorized the Kentucky State Police to independently investigate the event.”

Mayor Greg Fischer and other city officials held a press conference explaining that Kentucky very specifically has laws that do not allow police officers to be fired until an investigation is complete, and that he and others were pushing for expediting the process. Mayor Fischer did announce that after discovering that there was reportedly no body camera footage of the shooting, he had fired Louisville Metro Police Chief Steve Conrad.

According to officials, two Metro police and two Kentucky National Guard officers returned fire during the incident. In a Facebook live video shot at the time, a single shot can be heard. Police officers then line up and seemingly return about eight shots. Another two shots can be heard after that. The man filming the video can be heard saying the police came out and started firing shots. During the press conference, the acting police chief, Robert Schroeder, said they did not know whether or not any one of the numerous law enforcement officers on site activated their body cameras.

Schroeder addressed the death of Breonna Taylor and spoke about the aggressive stance taken by the Louisville Metro police and Kentucky National Guard. He also called for law enforcement to make it more clear to the Black community that they were there to protect and not attack.