Kayleigh McEnany brags that Trump won 8% of the black vote 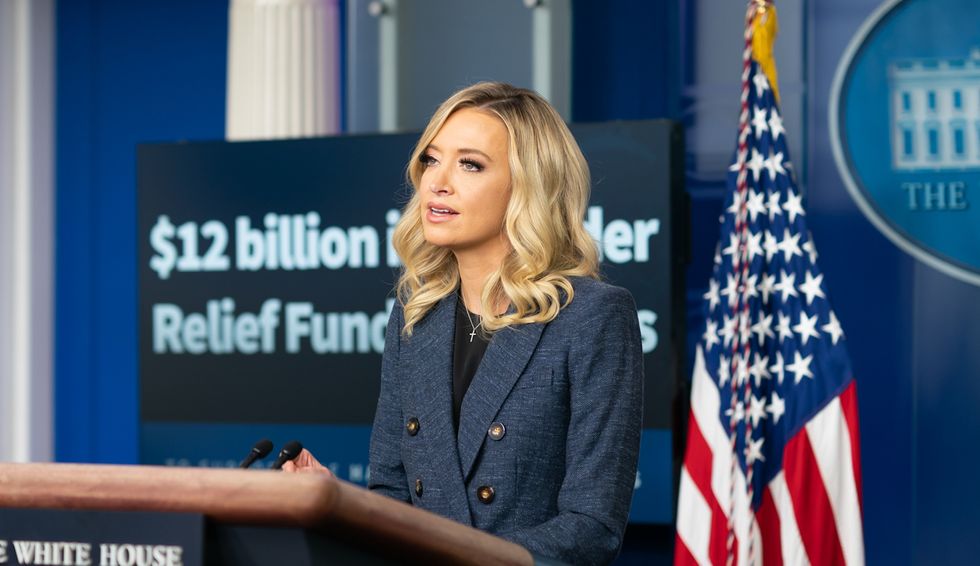 White House press secretary Kayleigh McEnany on Monday dodged a question about whether President Donald Trump agreed with Sen. Mitt Romney, R-Utah, who over the weekend declared that "black lives matter" as he marched in a protest against police brutality.

"Mitt Romney can say three words outside on Pennsylvania Avenue, but I would note this: that President Trump won 8% of the black vote. Mitt Romney won 2% of the black vote," McEnany said, referring to Romney's performance in the 2012 presidential election without clarifying if Trump agreed that "black lives matter."

Trump notably quoted a Twitter user in 2015 who claimed that his Democratic rival Hillary Clinton had dodged a question about Black Lives Matter in a CNN interview.

The president, who has threatened more than once to mobilize the military against Americans protesting police violence in the wake of the death of George Floyd in custody, recently mocked Romney, the lone Republican senator who voted to convict in his impeachment trial, for publicly supporting the social justice movement.

To be clear, McEnany's claim about Romney is false. Though Trump won 8% of the black vote in 2016, Romney actually won 6% of black voters — not 2%. Romney also ran against the first black president, who at the time was an incumbent.

McEnany then attacked infamous recording of Romney during a 2012 campaign donor event, in which he said: "47% of Americans will vote for [President Barack Obama] no matter what," because those people "are dependent upon government, who believe that they are victims, who believe the government has a responsibility to care for them."

The White House press secretary claimed that Trump had taken "great offense" to the remark. But not only did Trump agree at the time, he also said it was an issue worthy of national debate — and even implied that Romney had not gone far enough in his comments.

When asked about the remarks in a 2012 CNN interview, Trump said: "I don't think he should be apologizing for anything."

"This is something that has to be discussed. And, as you know, there are tremendous numbers of people — whether it's 47% or close to 50% — that don't pay taxes, and that don't pay income taxes and probably lots of other taxes," Trump added.

Trump has still not released his own tax records in spite of pledging as a candidate to do so. Lawyers for the president claimed in court last month that he had "absolute immunity" from subpoenas.

Though is is still unclear how much Trump pays in taxes, the New York Times reported in 2019 that the president paid essentially zero income tax for a decade after losing more than $1 billion between 1985 and 1994.

Trump has a well-documented history of racism, though as a candidate he promised to "take care of our African-American people." At one point, he even asked the voting bloc: "What do you have to lose?"

Trump has recently targeted Black Lives Matter, threatening to deploy troops on American citizens. Tear gas and rubber bullets were unleashed on peaceful protesters so he could take a photo holding a Bible in front of a fire-damaged church.

The president bathed the White House in blue light in 2017 to honor police officers who he claimed were victim to "unfair defamation and vilification."