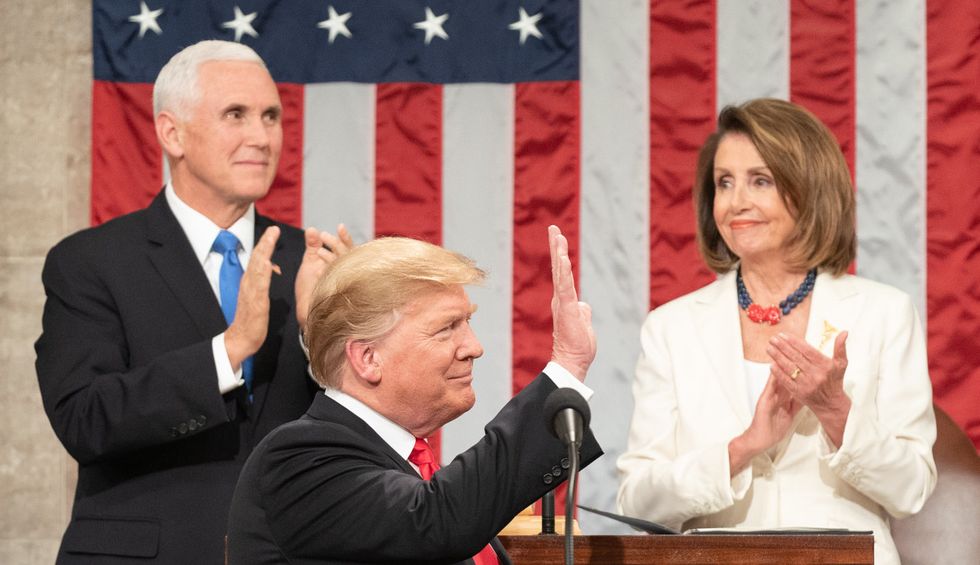 The inept response of our leaders in Washington, D.C., to nationwide protests following the police murder of George Floyd can best be depicted with two images. First, there was the image from June 1 of U.S. Park Police officers in riot gear using tear gas and flash grenades to clear peaceful protesters out of Lafayette Square, so that President Trump could have his picture taken holding up a bible in front of St. John’s Episcopal Church.

Not to be outdone, on June 8 Democratic leaders of the House and Senate had themselves photographed kneeling in Congress’s Emancipation Hall wearing kente cloth scarves. This performance was intended to illustrate the party’s deep concerns about the epidemic of police violence against African Americans.

Our nation’s leaders are finally being forced to listen to concerns raised by people in the streets. Their initial response of symbolic gestures and tokenism is not encouraging.

Contrast these images with Washington’s response to the cries of its major donors when, in March, the COVID-19 pandemic forced American businesses to shut down and workers to shelter in place. The leaders of both political parties quickly joined together to save the investor class by unanimously passing the CARES Act, whose 880 pages—clearly written by highly paid corporate lobbyists—bailed out big business (i.e., big donors) to the tune of $4.5 trillion, including companies like Boeing that were already sick prior to the virus. Congress decided not to save the rest of the real economy. As a result, small businesses are particularly at risk, as FEMA estimates some 40 percent of them don’t reopen after a disaster, a devastating blow to our great cities. Some 40 million Americans have been disconnected from their jobs and their health care, and must stand in mile-long food lines to provide for their families.

To be fair, the Democrats have gone beyond mere gestures. The party introduced the Justice in Policing Act, a package of modest reforms acceptable to the party’s corporate donors. But protesters are demanding real change.

The federal government must stop sending money and military hardware to police departments. It must end its disastrous war on drugs that has devastated communities of color and turned America into the world’s largest jailer of its own people. It must end the fraudulent war on terror that enriches corporate donors while making the world more dangerous for ordinary Americans. The money saved by ending these failed programs must be invested in programs that actually help crime-ridden communities, like free child care, adequately funded public schools, youth programs, a true national health care system that includes treatment for mental illness and addiction, and a federal jobs program to transition America to a green economy.

Of course, most of these reforms are unlikely as long as our national politics is controlled by corporate-owned parties. The for-profit insurance and health care industries will continue to block any movement toward a national health care system. Silicon Valley and industries that depend on keeping American workers in a precarious state, so that they will accept low-paying gigs driving us around or delivering our groceries, will block any federal jobs program. Weapons makers and fossil fuel extractors will block any reductions in the trillion dollars spent annually on military adventures and the security state.

The only way to achieve real reform is to end the duopoly of the corporate parties and to elect candidates to high office who are free from corporate influence. In theory, this is an achievable goal. Fewer and fewer Americans express loyalty to the Democratic or Republican parties. Roughly 40 percent of Americans do not belong to either major political party. The largest block of eligible voters are nonvoters who see no reason to participate in a rigged system.

According to Poll Watch in the June 14 print edition of the New York Times, “This November’s election could become only the second presidential contest in the history of modern polling in which both candidates are seen negatively by most voters.” You can probably guess the other election. It was four years ago when “both Mr. Trump and his Democratic rival, Hillary Clinton, were disliked by a majority of voters.”

The Democratic and Republican parties will continue to throw roadblocks in the path of third-party candidates—fighting to keep them off the ballot and out of the debates, and denying them federal matching funds. But the biggest obstacle to viability for third-party candidates is easily fixed. Our system of winner-take-all elections demands that voters cast their ballot for the lesser of the two evil establishment candidates, rather than “waste” their vote on a third-party candidate whom the corporate media has declared unelectable. (Members of my own family refuse to speak to me because I support third-party candidates for president.)

This insidious system can be fixed with a simple program called Ranked-Choice Voting or RCV. In an RCV system, voters rank the candidates in order of preference. If none of the parties get to 50 percent of the vote, the least popular candidate is stricken, and their votes are allocated according to the second choice of the voter. This system allows voters to select a candidate they actually believe in, rather than feeling pressured to choose the lesser evil. RCV encourages more voters to go to the polls. And it encourages third-party candidates to get on the ballot without worrying that they will be blamed for electing the greater evil, just as Ralph Nader was unfairly blamed for the election of George W. Bush in 2000.

Of course, RCV is vigorously opposed by the corporate parties, who use the fear of electing the greater evil to convince voters to withhold support from third-party candidates. Nevertheless, this opposition can be overcome if Americans demand real change. In 2018, Maine adopted RCV over heavy opposition. The result? Voter turnout was up, implementation was uncomplicated and inexpensive, few errors were made, and outcomes were perceived to be fair. Nine other states have implemented RCV at some levels.

RCV is an important reform worth fighting for. It empowers independent and third-party candidates by eliminating the “wasted vote” argument. And it gives Americans a fighting chance to achieve real reforms that benefit people over corporations.