'He is falling apart': Trump buried in scorn for turning off White House lights like his 'hiding from trick or treaters' as protests rage outside 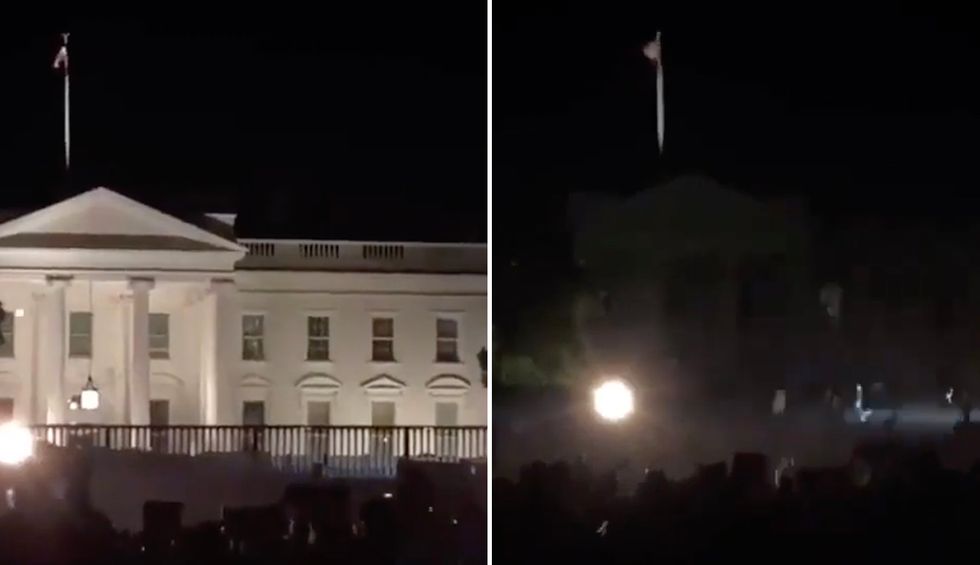 The White House turned off the external lights Sunday night as protests raged nearby, and the unusual reaction served as a metaphor for President Donald Trump’s leadership during the latest crisis.

The president was also whisked away to an underground bunker as Washington, D.C., police fired tear gas at protesters, who set fire to prominent structures across the city as part of nationwide demonstrations against police brutality.

Make no mistake-the White House was trying to hide by turning off all the lights last night. Stoke the hate, then run...how pathetic.
— Amee Vanderpool (@Amee Vanderpool)1591004762.0

Lights out at #WhiteHouse is a powerful symbol. Total lack of leadership from @realDonaldTrump #BunkerTrump https://t.co/pJTUYA3trT
— Steve Belovarich (@Steve Belovarich)1590990812.0

Like all other strong men, Donald Trump is a coward and soft and terrified. Hiding in the White House and turning o… https://t.co/2NSFl9ZyVi
— Jared Yates Sexton (@Jared Yates Sexton)1590982895.0

did the White House really turn the lights off like it’s Halloween and they ran out of Snickers
— bob of ganoush (@bob of ganoush)1590989452.0

in solidarity with the White House, i turned off the light in my fish aquarium and unplugged the microwave so the b… https://t.co/eLYzVEbqxi
— hend amry (@hend amry)1590994075.0

The White House went dark, turning off almost all of its external lights, as protesters set fires nearby and thousa… https://t.co/tstsu0SfCP
— The New York Times (@The New York Times)1590988679.0

LOL he turned the lights off and is hiding the same way I do from trick or treaters https://t.co/XjWIPfjpyN
— Vickie Comedy (@Vickie Comedy)1590989132.0

I have never seen this in my entire life. I lived in DC and worked at a restaurant two blocks from here and rode my… https://t.co/zjcRaNrl2i
— Duff Goldman (@Duff Goldman)1590987737.0

Trump allowing the White House lights to be dimmed and his evacuation to the PEOC are acts of cowardice. He quakes… https://t.co/CJCVsVVsd6
— Steve Schmidt (@Steve Schmidt)1590986848.0

Donald Trump has turned off all the lights in & around The White House. Probably to make all the protestors think… https://t.co/yVZuLZwpt8
— 𝕯𝖆𝖛𝖊 (@𝕯𝖆𝖛𝖊)1591005416.0