Good riddance to very bad rubbish: Here are 5 of the ugliest moments in the Steve King Hall of Shame 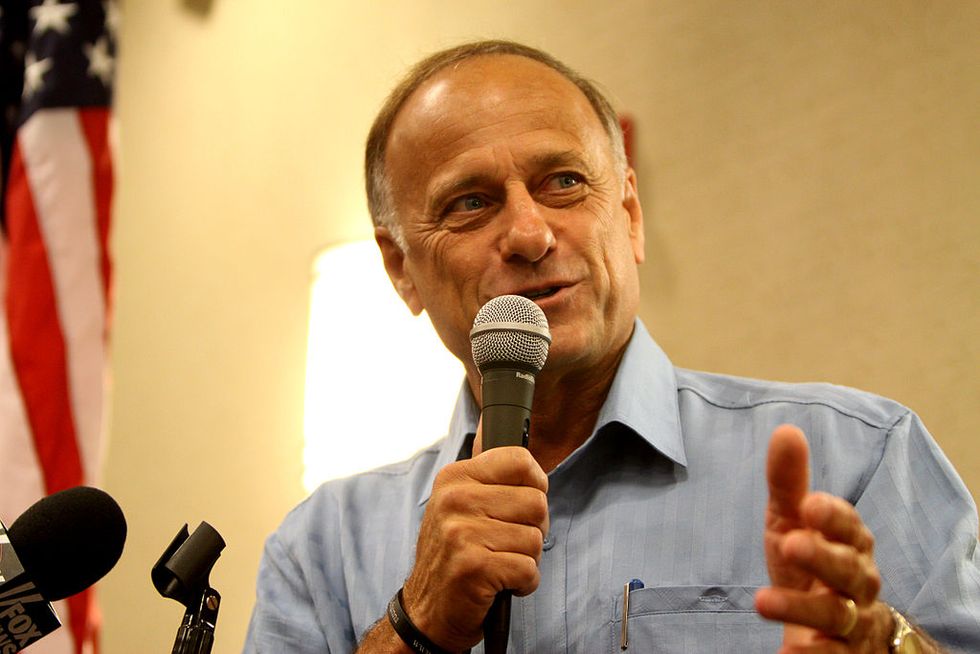 On, Tuesday, June 2, there was a major bombshell in Iowa politics: far-right Rep. Steve King, in Iowa’s 4th Congressional District, lost a GOP primary battle to Iowa State Sen. Randy Feenstra. It remains to be seen whether a Republican or a Democrat will win that seat in November, but one thing is for sure: it won’t be King, whose history of racism, homophobia and religious extremism is so disturbing that even GOP voters in a conservative district in Iowa finally rejected him.

The 71-year-old King has been a fixture in Iowa politics, serving in the Iowa Senate in the late 1990s and early 2000s before first being elected to a seat in the U.S. House of Representatives in 2002. King was reelected time and time again, but this week, even white GOP voters finally had enough of him.

Here are 5 of the most appalling moments in the Steve King Hall of Shame.

In a January 2019 interview with the New York Times, King asserted, “White nationalist, white supremacist, western civilization — how did that language become offensive?” King, during that interview, made it clear that he didn’t consider white nationalism a bad thing. Moreover, he slammed the Democratic Party for its diversity, saying, “You could look over there and think the Democratic Party is no country for white men.”

King has often failed to make a distinction between legal and undocumented immigrants from Mexico. In a July 2013 interview with Newsmax, the congressman said of Mexican immigrants, “For every one who’s a valedictorian, there’s another 100 out there who weigh 130 pounds — and they’ve got calves the size of cantaloupes because they’re hauling 75 pounds of marijuana across the desert.” The comments were so offensive that even then-House Speaker John Boehner and then-House Majority Leader Eric Cantor called him out. Cantor denounced King’s comments as “inexcusable,” Boehner as “hateful” and “ignorant.”

Democrats enjoyed a net gain of 40 seats in the U.S. House of Representatives in the 2018 midterms, achieving a House majority and providing some desperately needed checks and balances against Donald Trump’s presidency. But King, sadly, was reelected that year despite describing Mexican immigrants as “dirt” on a campaign stop. When the conservative Weekly Standard reported what he said, King denied saying it — and the now-defunct Standard responded by post an audio recording showing that, in fact, he did.

It was under President Barack Obama’s watch that one of the world’s most vile and evil terrorists, al-Qaeda leader Osama bin Laden — the mastermind of the September 11, 2001 terrorist attacks — was killed by U.S. forces. Obama gave the order that gave the green light for the May 2011 raid in which bin Laden was killed in Pakistan. Regardless, King equated Obama with radical Islam and jihadism; never mind the fact that Obama repeatedly make a clear distinction between extremists like al-Qaeda and ISIS (Islamic State, Iraq and Syria) and mainstream non-violent Islam and viewed al-Qaeda as a disgrace to Islam.

In 2008, during Obama’s first presidential campaign, King told KICD Radio, “When you think about the optics of a Barack Obama potentially getting elected president of the United States — I mean, what does this look like to the rest of the world? What does it look like to the world of Islam? I will tell you that, if he is elected president, then the radical Islamists, the al-Qaeda, the radical Islamists and their supporters, will be dancing in the streets in greater numbers than they did on September 11.”

Actually, Obama scared the hell out of jihadists. When an African-American man is president of the United States and draws a clear distinction between honorable Muslims and murderous extremists, that is the last thing that jihadists want to see.

Although Obama has a populist rhetorical style that draws heavily on the tradition of Dr. Martin Luther King, Jr. and the African-American church, he was quite centrist during his eight years as president. Many liberals and progressives wished that had been more left-of-center in his policies. Regardless, King viewed Obama (whose mother was white) as a militant black nationalist — which is quite laughable to the millions of African-Americans who would see a huge difference between an Obama speech and a speech by Minister Louis Farrakhan, leader of the Nation of Islam.

Anyone who went to a heavily African-American area in the United States — North Philly, South-Central Los Angeles, the West Side of Chicago, wherever — and insisted that Obama and Farrakhan were identical in their views would be laughed out of the area. But when King appeared on G. Gordon Liddy’s radio show in 2010, King insisted, “The president has demonstrated that he has a default mechanism in him that breaks down the side of race — on the side that favors the black person.”