'Freedom from barbarism is not social justice': Jesse Jackson on protests and police reform 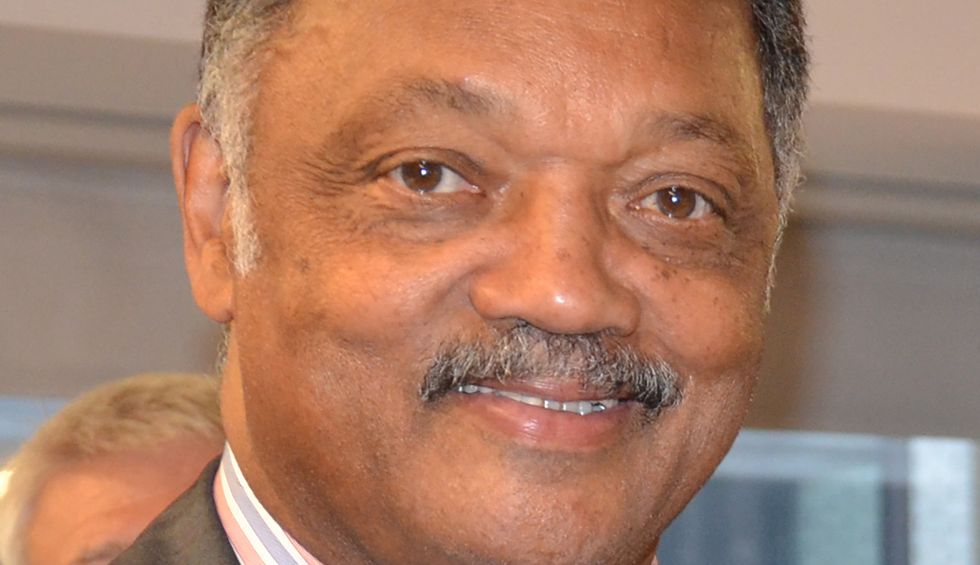 Jesse Jackson has the rare gift of communicating in aphorism. One of his many memorable linguistic coinages is, “We never lost a battle we fought. We never won a battle unless we fought.”

As the battles rage outside his window, Jackson, an astute and accomplished political-combat veteran at 78, feels his spirit oscillate rapidly between hope and “concern” – the latter a term that he continually used to underscore his observations on what he called “The perfect storm.” “We have a medical crisis,” Jackson said, his voice heavy and urgent when I sat down with him in his Chicago office, “That has exposed the racial and class disparities of our health care and economic system. That’s covid-19. Then, we have code blue – the police brutality that has exposed racial disparities in criminal justice. We have the effects of the untreated pandemic of poverty. We also have a hostile president who is trying to create a race war to justify his failures. It is all coming together.”

The cloud rotation, temperature changes, and shifting winds that created the perfect storm were in the atmosphere, ready to coalesce when Derek Chauvin, a Minneapolis police officer, coldly murdered George Floyd in broad daylight, while three of his fellow cops watched in silence for over eight minutes.

Within hours of video footage of the murder going viral, thousands of Americans began to fill the streets, demanding justice not only for Floyd, but also for the countless black Americans who endure the daily threat of police profiling and harassment. The pace and passion of the citizen response gives Jackson hope, especially as he juxtaposes the demographics of the street movement with his own recollections of marching for the right to vote in Selma in 1965.

“To have young blacks, Hispanics, Asians, and whites together, shutting down highways in major American cities, because a black man was murdered says a lot, and it is a lot,” Jackson declared with a lift in his voice.

The enhancement of a “Rainbow Coalition,” which is the name of the civil rights organization that Jackson founded and the cross-cultural, class-conscious politics he has espoused since his presidential runs in 1980s, also acts as a source of hope for a potential Biden presidency, despite the sizable flaws in the Democratic nominee’s legislative record. “Biden is a boat in a multicultural ocean,” Jackson said in reference to a more progressive Democratic party and culture that he helped to fashion, “The movement of the boat is often determined by the flow of the ocean and the wind in the sails.”

Visible and actionable changes provide Jackson with faith in future progress, but there are both changes and constancies that give the civil rights icon cause for worry and anxiety.

“We can see code blue,” Jackson said returning to his metaphor for police violence, “But we cannot see coronavirus. It troubles me to see so many people close together, without masks, without distancing. If we forget about coronavirus, we can die.”

Jackson’s official title is “Reverend,” and he is often fond of quoting the Biblical warning that those who labor to build a better world “struggle not against flesh and blood, but powers and principalities.”

Similar to the invisibility of a disease traveling through the air and into the nervous system of an unsuspecting protestor or pedestrian, the most catastrophic elements of injustice in America, according to Jackson’s contention, are not immediately visible to the naked eye.

“Police brutality,” Jackson explained, “is the epidermis. Racism cuts bone deep.” One of his concerns is that protest movements are only as effective as their goals are clear. “In the 1960s, we marched for the right to vote. When we brought the movement to Chicago, we marched for an end to the slums – an end to the laws that allowed whites to live in clean suburbs with tulips and beautiful lawns, and forced blacks into the slums, the ghettos.”

The United States of America has invented an entire industry – public relations – to cover acts of deception and exploitation with a patina of neutrality and moderation. Creating a land of fiction did not begin with corporate America, however. It might have begun with official government policy. Jackson uses the example of “segregation,” which he calls a “soft word,” to describe what was in reality, “apartheid,” more approximate to the terror of South Africa than most Americans would like to believe.

“Nelson Mandela did not spend 27 years in jail to desegregate schools and get the police to treat him better,” Jackson said. “He wanted to change the whole system.”

Without a radical restructuring of the American architecture, one can continue to expect black citizens to fall into the cracks of the foundation.

Jackson, who has spent the past 50 years fighting for equity and parity in corporate America, and in the process winning thousands of jobs, millions of dollars in contracts for black entrepreneurs, trade union admission, and lucrative franchise deals for black investors, offers an example of undeniable clarity to illustrate the veracity of systemic diagnosis: “Blacks make up the overwhelming majority of NFL players, but don’t own one team. Well, we couldn’t bid when the price was low.”

Jackson also recalls leading a fight in New York for Cadillac to open more black-run dealerships in Harlem and other boroughs. During his campaign for inclusion and equal opportunity, he met an executive with the car company who informed him that his seven grandchildren would inherit all his dealerships. “They inherited at birth what we were fighting for a chance to have,” Jackson said before offering, “Excellence and effort are important. Inheritance and access are more important.”

The word “systemic” has become fashionable in political debate surrounding the widespread misuse of police authority, but Jackson’s delineation cuts deeper. Rather than treat flesh wounds, Jackson would perform orthopedic surgery in his diagnosis of “bone-deep racism.” Under the microscope, many ugly realities become manifest: Black children in the inner city suffer much higher asthmatic rates than their white suburban counterparts, schools regularly fail to provide black pupils with an adequate education due to disparities in the funding mechanisms, and poverty remains disproportionately harmful to blacks as compared to whites.

In Chicago, black residents account for 30 percent of the city, but nearly 70 percent of covid-19 deaths.

“Whites see a police officer murder George Floyd,” Jackson said, “And they are embarrassed. They think, ‘that’s not our culture.’ “Really?” Jackson asked with his eyes open wide, “After the Indian Removal Act, after Jim Crow, after corporate apartheid. This is the system. Whites benefit from the system. You can’t swim without getting wet.”

“Police patrol,” Jackson explained with a characteristic rhyme, “They don’t control.” He worries that if the current movement does not include demands for “equity and parity across the board” that the behavior of the police – “the gatekeepers” – might improve, but that the calamitous conditions “behind the gate will remain intact.” Jackson identifies “police reform” as the beginning, not the end, of societal transformation: “Freedom from barbarism is not economic and social justice.”

As a first act of productive revolt, Jackson insists upon viewing the vote as a “militant apparatus.” “People downplay the vote,” Jackson said. “First of all, if it wasn’t important, the Republicans would not expend so much effort to suppress it – to keep blacks, to keep college students, to keep Native Americans from voting; to stop people from voting bilingually.”

Even the most obstinate cynic look no further than the Black Lives Matter protests of the past month for evidence of the magnificent power of the franchise: “Dr. King did not see one black mayor of a major city. Now, we’ve got Lori Lightfoot in Chicago, Keisha Lance Bottoms in Atlanta, Muriel Bowser in Washington, DC, London Breed in San Francisco, Melvin Carter in St. Paul. And we have allies in other cities. Mayor Richard Daley of Chicago gave police a shoot to kill order against protestors in 1968. With all these protests of recent weeks, there would be a lot of dead folk if the right wing were in mayoral positions.”

Jackson transitions from his urgent illustration of the importance of the vote to a reiteration of his main refrain: “If we look at only law enforcement, and not the law itself, and the lawmakers, this thing will radically diminish.”

When I asked Jackson to articulate an agenda that will more dramatically advance social justice, racial equality, and participatory democracy, he returned to the universality of economic empowerment – the sublime promise of activating a shared interest that shoots through the divisions that those in seats of power exploit to maintain their wealth and authority.

Racism and other forms of officially enshrined hatred demolish the possibility of “a more perfect union” in which a multicultural, multi-racial, and multi-religious citizenry makes a mutual investment into the promotion of the “general welfare” – “securing the blessing of liberty” and “establishing justice.”

Shortly before I left Jackson’s office, he recalled when the city of Chicago extended its famous elevated train further north into its growing neighborhoods. “When the track moves, the train can move,” Jackson said before likening the black freedom movement to the track that enables all of America to inch closer to a government “of, by, and for the people.”

From Frederick Douglass to Eugene Debbs, from Jesse Jackson to Cesar Chavez, and from John Brown to Martin Luther King, the demand for a broad coalition doubles as a conductor’s call: All aboard.