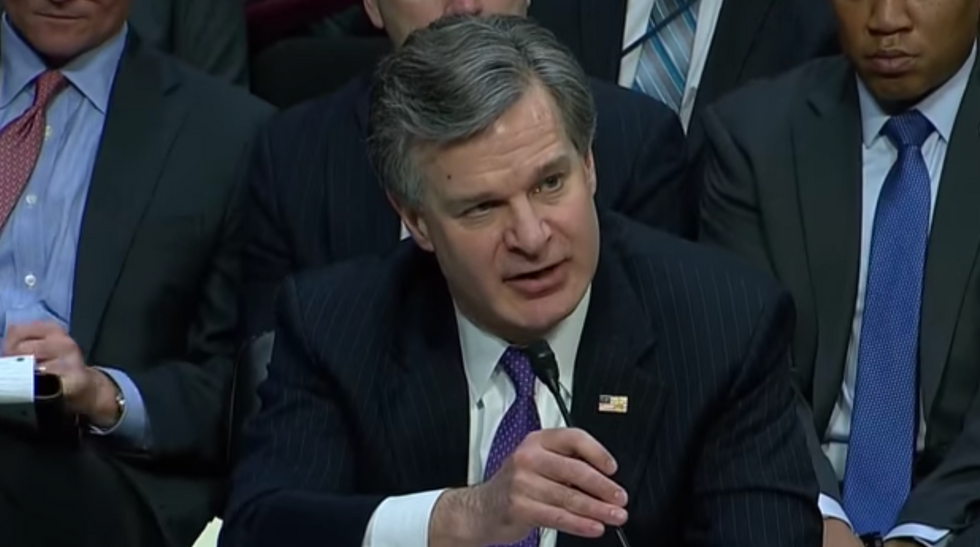 The FBI found no intelligence "indicating Antifa involvement" in violence surrounding Sunday's protest near the White House despite President Donald Trump's attempts to cast blame on radical leftists, according to an FBI situation report obtained by The Nation.

An FBI source told the outlet that other situation reports, produced daily by the FBI since the weekend, have similarly shown no evidence of Antifa involvement.

That portion of the report followed a list of violent acts committed during the protest, including people who threw bricks at police and a backpack found to contain explosives.

The report was produced on the same day that Trump announced on Twitter that he would label Antifa a terrorist organization, even though experts say such a move would be unconstitutional. Antifa, short for anti-fascist, is not an organization but rather a political protest movement made up of many autonomous groups and individuals.

"The violence instigated and carried out by Antifa and other similar groups in connection with the rioting is domestic terrorism and will be treated accordingly," he said in a Sunday statement.

Trump and his administration have repeatedly blamed Antifa for causing violence at protests across the country. State officials have said they found evidence of left-wing extremist groups and white supremacist groups plotting violence, yet Trump has insisted that there was no white supremacist or right-wing involvement.

"It's ANTIFA and the Radical Left," he tweeted Saturday. "Don't lay the blame on others!"

But while the FBI report did not find evidence of Antifa involvement, it did warn that members of a far-right social media group "called for far-right provocateurs to attack federal agents" and "use automatic weapons against protesters."

Citing the FBI, a separate memo issued by the Department of Homeland Security revealed that "a white supremacist extremist Telegram channel incited followers to engage in violence and start the 'boogaloo' — a term used by some violent extremists to refer to the start of a second Civil War — by shooting in a crowd."

The FBI also found evidence that "suspected anarchist extremists and militia extremists allegedly planned to storm and burn the Minnesota state Capitol," according to the memo, which was obtained by Politico.

In some cases, far-right groups have sought to stage Antifa threats of violence on social media.

Twitter said earlier this week that it shut down a fake Antifa account that called for violence after it was linked to the white nationalist group Identity Evropa, which the Southern Poverty Law Center classifies as a "hate group."

Donald Trump Jr. shared a screenshot of the account calling for violence in residential areas, citing it as proof of his father's dubious claims.

"Absolutely insane," Don Jr. wrote before later removing the post. "Just remember what ANTIFA really is. A Terrorist Organization! They're not even pretending anymore."

Many conservatives have seized on the Antifa narrative to counter the rising threat posed by far-right groups, which has been documented by the Department of Homeland Security and the FBI, argued Alexander Reid Ross, a lecturer at Portland State University and the author of "Against the Fascist Creep."

"Antifa just became a term used by anyone and their grandma to describe somebody who was opposed to the open fascism that was being paraded around in all kinds of media," he told Politico. "I think with the popularization of the alt-right, there was sort of a counter-popularization of Antifa, to the point where it simply describes people who are anti-fascist or people who are against racism and are willing to protest against it."

Ross suggested that Trump was using the overhyped threat of Antifa to boost support among conservatives. Indeed, the Trump campaign is already fundraising on the threat of "dangerous MOBS of far-left groups" that are "DESTROYING our cities and rioting," according to Politico.

"It's this kind of thing that he does, periodically; using the term as a sort of Boogeyman that can accumulate all those things that he hates, and take on these super powers that require the full force of law enforcement to neutralize," Ross said. "And so, in this case, I think that pretty much the cardinal reason for trotting it out is to create a scapegoat."