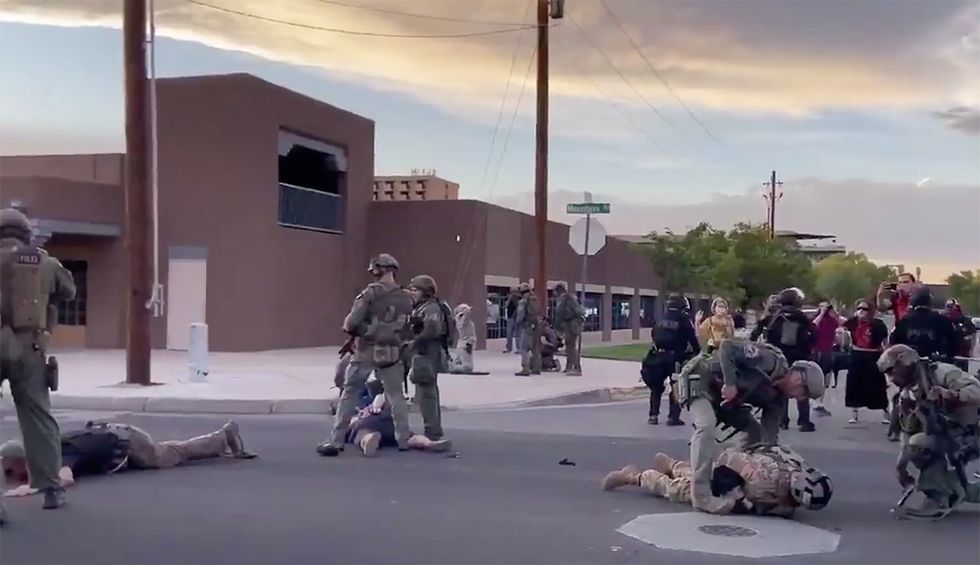 Members of a far right militia group were arrested Monday evening in Albuquerque after a standoff at a statue of a notoriously brutal conquistador in the New Mexico city turned violent with a demonstrator advocating for the removal of the monument shot and sent to the hospital.

"The shooting tonight was a tragic, outrageous, and unacceptable act of violence and it has no place in our city," tweeted Mayor Tim Keller shortly after the incident.

The shooting tonight was a tragic, outrageous and unacceptable act of violence and it has no place in our city. Our… https://t.co/ta7DHu1E5x
— Mayor Tim Keller (@Mayor Tim Keller) 1592281481

The dispute centered on a monument to conquistador Juan de Oñate, whose brutality toward the area's Indigenous population in the late 16th and early 17th centuries, particularly the Acoma people, was extreme even for its time.

"If you look at it logically, he was no one to celebrate," Santa Fe activist Elena Ortiz told the Albuquerque Journal.

As the New York Times detailed:

Oñate's period as governor was marked by a violent repression considered severe even by the standards of his time. He killed 800 Indigenous people in Acoma Pueblo and ordered his men to cut off the foot of at least 24 male captives. Spanish authorities convicted him on charges of excessive violence and cruelty, permanently exiling him from New Mexico.

"Melt them down and recast them as commemorative pieces," Acoma artist Maurus Chino told the Times of monuments to the conquistador.

A statue of Oñate in Albuquerque, named "La Jornada," was the focal point of Monday's protest. As dusk fell, demonstrators began attempting to pull the monument down from its pedestal on the Albuquerque Museum grounds.

At that point, members of the New Mexico Civil Guard militia group moved in, attacking the protesters. Within minutes, gunshots rang out and one man had been shot.

The victim was transported to a hospital where he was listed as in critical condition. A number of militia members were arrested, including a man in a blue shirt identified as the shooter who yelled that his father was a sheriff.

The relative ease and peacefulness with which the heavily armed white militia members were gently arrested was not lost on critics who noted the disconnect between the treatment of the far-right extremists who had just shot a man and the killings of unarmed black men by police caught on camera in recent years.

The right wing militia movement's involvement in the protests is a cause for concern in New Mexico, tweeted Sen. Martin Heinrich (D-N.M.).

"This is not the first report of heavily armed civilian militias appearing at protests around New Mexico in recent weeks," said Heinrich. "These extremists cannot be allowed to silence peaceful protests or inflict violence."

The right-wing militia's attempts failed to keep the Oñate monument in place Monday. Hours after the shooting, Keller announced he was having the statue removed; the city took the statue down early Tuesday.