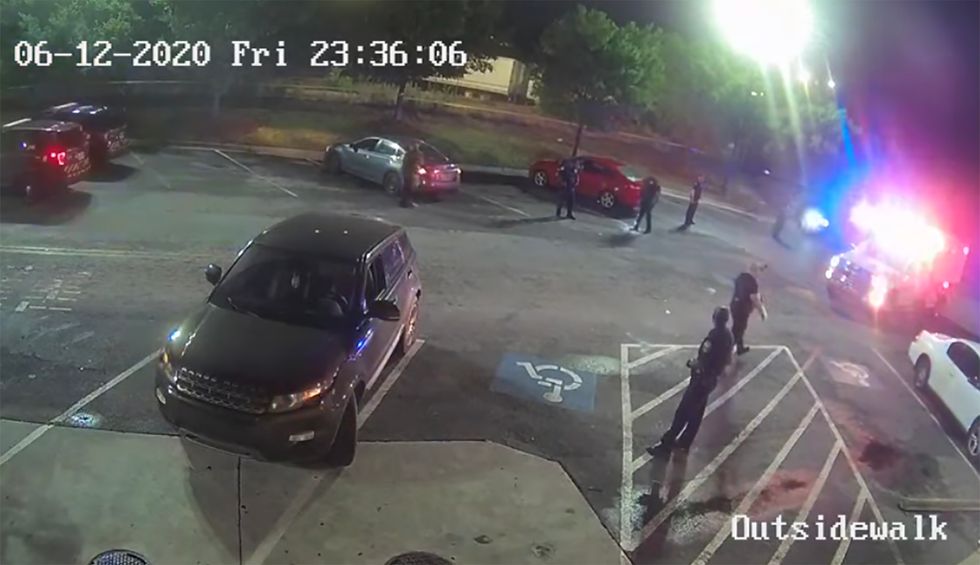 Demands for accountability and sweeping reforms mounted Saturday after Atlanta police shot and killed Rayshard Brooks, a 27-year-old black man, Friday night amid a wave of global protests against police violence and systemic racism sparked by the death of George Floyd in Minneapolis late last month.

In a message to Atlanta Mayor Keisha Lance Bottoms on Saturday, the Georgia NAACP tweeted that the city's police department "needs a serious overhaul. The continuation of these kinds of actions require immediate resolution. Instead of seeing an improvement, it continues to happen day after day."

The Georgia NAACP said the Atlanta Police Department (APD) "has had a culture of excessive use of force" and called for Police Chief Erika Shields to be "relieved immediately." The group also demanded the release of "body cam footage and all surveillance video from surrounding buildings" to shed light on Brooks' killing.

Bottoms announced during a Saturday afternoon news conference that Shields offered her resignation, which she accepted. The mayor also said that she does "not believe this was a justified use of deadly force" and she has "called for the immediate termination of the officer" who shot Brooks.

Brooks died following surgery at a local hospital after APD officers were dispatched to a Wendy's restaurant around 10:30 pm Friday to respond to "a complaint of [Brooks] in a vehicle parked in the drive-thru asleep, causing other customers to drive around the vehicle," according to the Georgia Bureau of Investigation (GBI), which is investigating the shooting. The involved officers have not yet been publicly identified.

GBI initially said that after Brooks failed a field sobriety test, "officers attempted to place the male subject into custody. During the arrest, the male subject resisted and a struggle ensued" involving a Taser. In an updated statement Saturday, GBI said, "An earlier account of this incident was based on the officer's body cam which was knocked off during the physical struggle, preventing the capture of the entire shooting incident."

Video footage of Brooks' encounter with APD circulated on social media and appears to show him running away from officers when he was shot. The updated GBI statement said the bureau had "obtained additional surveillance video from the Wendy's restaurant," which was released to the public.

"Agents have also reviewed video posted on social media," GBI added. "These new videos indicate that during a physical struggle with officers, Brooks obtained one of the officer's Tasers and began to flee from the scene. Officers pursued Brooks on foot and during the chase, Brooks turned and pointed the Taser at the officer.  The officer fired his weapon, striking Brooks."

Rev. James Woodall, state president of the Georgia NAACP, told reporters Saturday that "this is not the first time a black man has been killed for sleeping." He added that "while Atlanta is often called 'the Black Mecca,' the Atlanta Police Department has a continued history of antagonizing our communities."

The Washington Post reported that during a call with journalists Saturday afternoon,

Woodall stopped short of calling for Bottoms' resignation, but said that it was her responsibility to ensure citizens have "the kind of police department the City of Atlanta deserves." Woodall also called out the lack of public statements from the mayor's office and police department as of early Saturday afternoon.

Woodall said the Georgia NAACP has hired a private investigator and that a press conference would take place Tuesday morning.

According to the Atlanta Journal-Constitution, Woodall was asked if his group has been in contact with Bottoms or APD. "At this present moment," he said, "we have not heard from the mayor herself or the police chief, and the silence is deafening."

Stacey Abrams, a Georgia voting rights activist who ran for governor as a Democrat in 2018, took to Twitter Saturday to demand investigations and accountability in this case as well as broader reforms in local policing. She declared: "Sleeping in a drive-thru must not end in death."

The killing of #RayshardBrooks in Atlanta last night demands we severely restrict the use of deadly force. Yes, in… https://t.co/ArcdSFD4CV
— Stacey Abrams (@Stacey Abrams) 1592066847.0

Brooks' death added to the growing outrage over police violence toward people of color, particularly black Americans, that has fueled #DefundPolice demands and demonstrations across the U.S. and in other countries for nearly three weeks.

Saturday also saw demonstrations in other U.S. cities including Washington, D.C. as well as in London, Paris, Prauge, and Perth, the capital of Western Australia. Some events in Europe drew far-right counter-protesters who clashed with police.