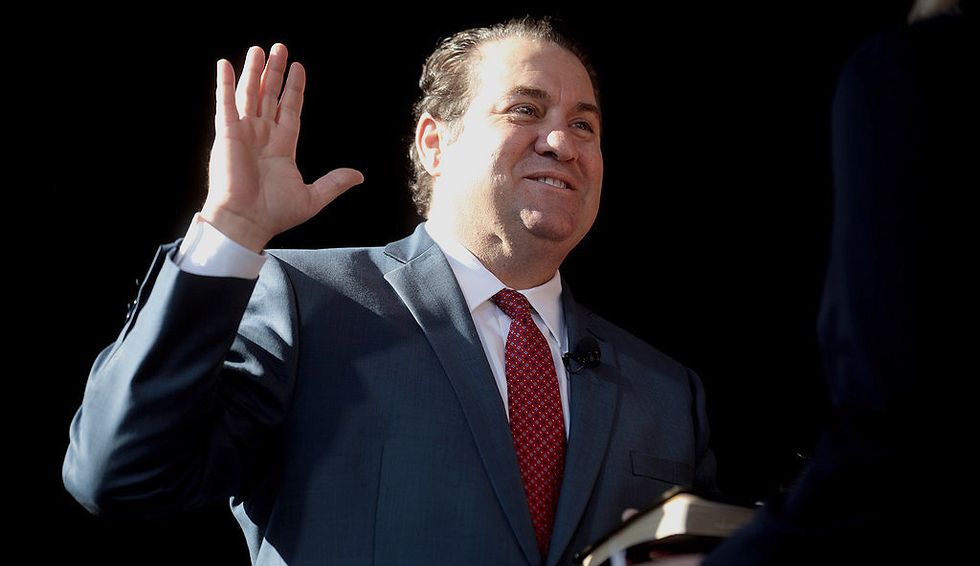 If anyone thought things were bad in Arizona, and they are, just wait another week or two, when we’ll begin to see the results of 3,000 mostly unmasked young people, who had attended a Trump gabfest, going out into the community. Home to mom and dad, over to grandma’s place, back to work at the fast food joint or out with friends.

Put that many people shoulder to shoulder, hooting and hollering, back-slapping and hand-shaking for hours, and it’s a good bet that some people will die who should not have—all because a sick narcissist who won’t wear a mask insisted on a stage. And for what? To spew racist bullshit.

I’ve said before that Trump’s May 5 visit to a Phoenix mask factory where, natch, he went mask-free, was the start of our recent unpleasantness. Crawling as far up Trump’s arse as he could, Gov. Ducey used the limelight to announce that Arizona would open sooner and bigger than planned, even though epidemiologists opposed the move.

Right on cue, two weeks after Trump left Phoenix the deadly red line skyrocketed northward and has not slowed—mostly because the state never had an adequate stay-at-home order in place, relying instead on a business-friendly voluntary version that trusted bars, restaurants, stores, and people to do the right thing. Too many didn’t. At the same time, for a while Arizona was ranked last in the nation in testing. It still sucks. So now there are few tools in place to “flatten” anything quickly, which means the nightmare that hospitals and caregivers are already experiencing is only going to get worse.

Some of the 3,000 mostly young Republicans who attended Trump’s big virus jamboree at Dream City Church probably thought it was safe, because two pastors posted a happy video (are they selling cars?) explaining that a new magic air system installed by Clean Air EXP will “neutralize 99.9% of Covid within ten minutes”! Praise God and Holy Shit, why doesn’t the CDC know about this? You may have already guessed.

There are some holes in their safety net, as the good doctor pointed out. Even if the system killed all Covid-19 in the church, it doesn’t do a damn thing to the viruses people carry into the church, then they sit next to you (and not exactly social distancing). More to the point, the thing does not work! If it kills any airborne germs, it’s the ones that cause the common cold—not Covid-19. Is there anything in TrumpWorld that isn’t a scam?

It’s bad enough that Trump encourages thousands of dupes to play Russian Roulette with their lives, and the lives of their families and friends. But there aren’t any words left for Trump-loving men of god who mislead youngsters, so a mass murderer won’t be embarrassed like he was in Tulsa—so the madman will have a full house. Trump’s gotta be one sick fuck to get off on what he’s done to this town.

Every time death-breath comes to Arizona the Covid numbers spike. AG Brnovich should send another cease and desist order to D.C.