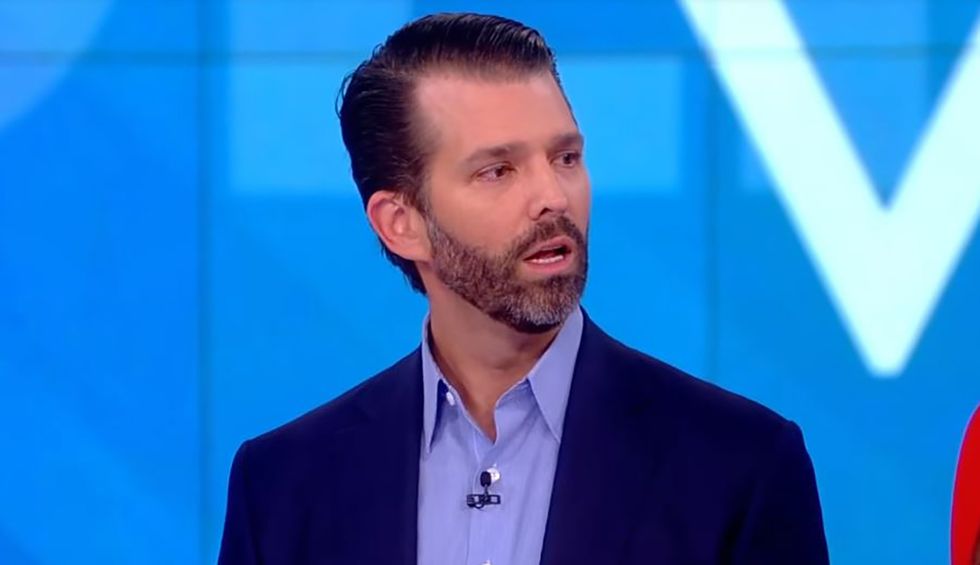 Image via Screengrab>
David Badash
and
The New Civil Rights Movement
May 13, 2020

Donald Trump Jr. took to the airwaves Tuesday to defend his father after Monday’s disastrous press conference. President Donald Trump was highly criticized for appearing to make a racist accusation against an American White House reporter for CBS News who is of Asian descent.

Claiming he was “disgusted” by CBS News’s Weijia Jiang, Trump Jr. told Fox Business host Lou Dobbs, “apparently the reporter’s Asian so she says, ‘Why are you asking me?'”

As he mimicked her he closed his eyes, almost squinting.

The President on Monday had told Jiang she should “ask China” her “nasty” question about coronavirus testing, and not him.

“The race-baiting from this media to try to turn literally anything into a racial issue is absolutely disgusting, they should be ashamed of themselves,” Trump Jr. yelled.

“The reality is racism is still a real issue, it’s just not the answer to every issue,” he continued, stressing the word “every.”

“It’s the easy button of the political left.”

“The problem is that minimizes those that are actually affected by it – which is certainly not someone in the White House press pool,” Trump Jr. insisted, ignoring that President Trump refused refused to answer a question about the coronavirus by a reporter of Asian descent seemingly because she is of Asian descent and he has been trying to blame China by saying the coronavirus was released from a Wuhan lab, which is false.

“And so to try to turn everything about that diminishes the effect of real racism on people who are actually afflicted by it,” he said, insisting that she tried to turn Trump’s comments to her into racist remarks. Many felt they were racist.

Jr. then went on a tangent, attacking the media in general, claiming “there’s been absolutely zero accountability” for reporters, “after peddling the Russia hoax for three years, tells you all you need to know about today’s mainstream.”

“They are a broken, partisan institution, and that’s it. Media as we know it is dead.”

Reports from last week reveal Trump Jr. is in talks to invest in the far right wing media outlet One America News (OAN).

Donald Trump Jr thinks people call out racism too much and that "diminishes the effects of real racism" https://t.co/TPIEVnSNQS
— Jason Campbell (@Jason Campbell)1589320592.0

Many on social media took Trump Jr. to task.

Hey @DonaldJTrumpJr What the hell would you know about racism, other than being a purveyor of same, while also quac… https://t.co/XxKMyd62yt
— StellaMoon60 (@StellaMoon60)1589322366.0

Because the people to teach us about racism are Lou Dobs and Junior. It's staggering to me that Republicans are so… https://t.co/JqtoK2kDcX
— Jason Argonaut (@Jason Argonaut)1589321164.0