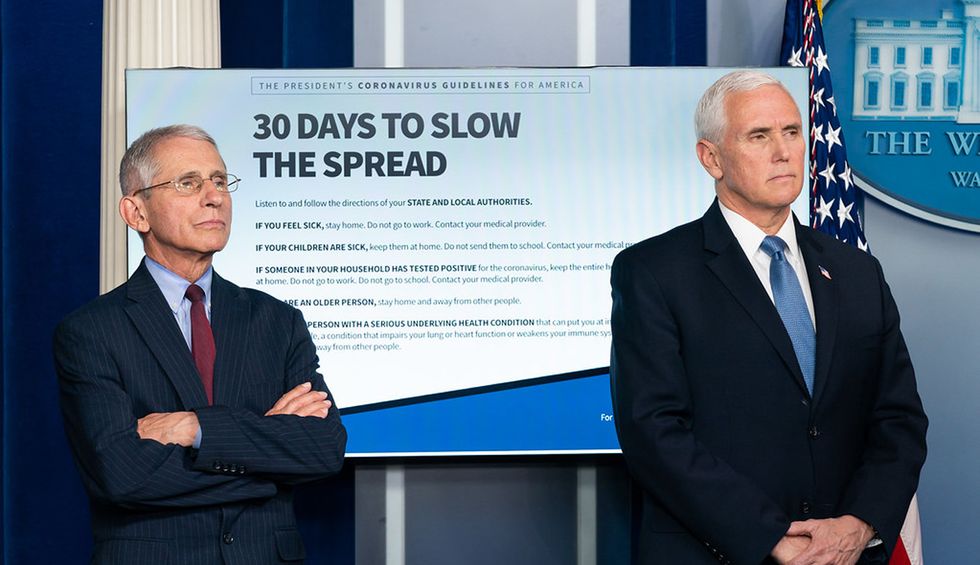 The Trump administration projects that 3,000 people will die daily from COVID-19 by next month, nearly doubling the current death toll, according to an internal document first reported by The New York Times.

The data was included in a slide deck that was branded with the logo of the Centers for Disease Control and Prevention (CDC). Both the White House and the health agency denied that the projections had been issued.

"This is not a White House document, nor has it been presented to the Coronavirus Task Force or gone through interagency vetting," the White House said in a statement to The Washington Post. "This data is not reflective of any of the modeling done by the task force, or data that the task force has analyzed."

Justin Lessler, the epidemiologist at the Johns Hopkins Bloomberg School of Public Health who created the model, told the outlet that the numbers were a warning rather than a "forecast." He said 100,000 new cases per day were more realistic, though that figure hinges on political decisions.

"There are reopening scenarios where it could get out of control very quickly," he said.

President Donald Trump has been far more optimistic, predicting earlier this week that the death toll would reach as high 100,000 — it has already eclipsed 70,000 — and urging states to move forward with their plans to reopen businesses.

White House officials long relied on a model from the Institute for Health Metrics and Evaluation (IHME) at the University of Washington. But that model was revised Monday to project nearly 135,000 deaths, or more than double the projection it showed on April 17, when it estimated a death toll just north of 60,000. The model projected more than 72,000 deaths prior to Monday's update.

The researchers cited decisions to ease social distancing in dozens of states as the reason for the increase, writing that "rising mobility in most U.S. states as well as the easing of social distancing measures expected in 31 states by May 11, indicating that growing contacts among people will promote transmission of the coronavirus."

Ali Mokdad, a professor of Health Metrics Sciences at IHME, told CNN that "premature" reopenings were one of several key reasons for the increase.

"One of them is increased mobility before the relaxation, premature relaxation, of social distancing," he said. "We're adding more presumptive deaths as well, and we're seeing a lot of outbreaks in the Midwest, for example."

Though factors like testing capacity and population density influence the model, "the most important one is mobility," he said. "We're seeing an increase in mobility that's leading to an increase in mortality, unfortunately, in the United States."

Former New Jersey Gov. Chris Christie, a Republican who is close to the president, argued in an interview published on Monday that states needed to go ahead with their plans to ease restrictions because there was no "perfect solution."

"Of course, everyone wants to save every life they can, but the question is, toward what end, ultimately? Are there ways that we can . . . thread the middle here to allow that there are going to be deaths, and there are going to be deaths no matter," he said. ". . . We've got to let some of these folks get back to work, because if we don't, we're going to destroy the American way of life and these families, and it will be years and years before we recover."

Dr. Anthony Fauci, the director of the National Institute of Allergy and Infectious Diseases, said it was up to governors to decide how many deaths they find acceptable.

"It's the balance of something that's a very difficult choice," he told CNN. "How many deaths and how much suffering are you willing to accept to get back to what you want to be some form of normality, sooner rather than later?"