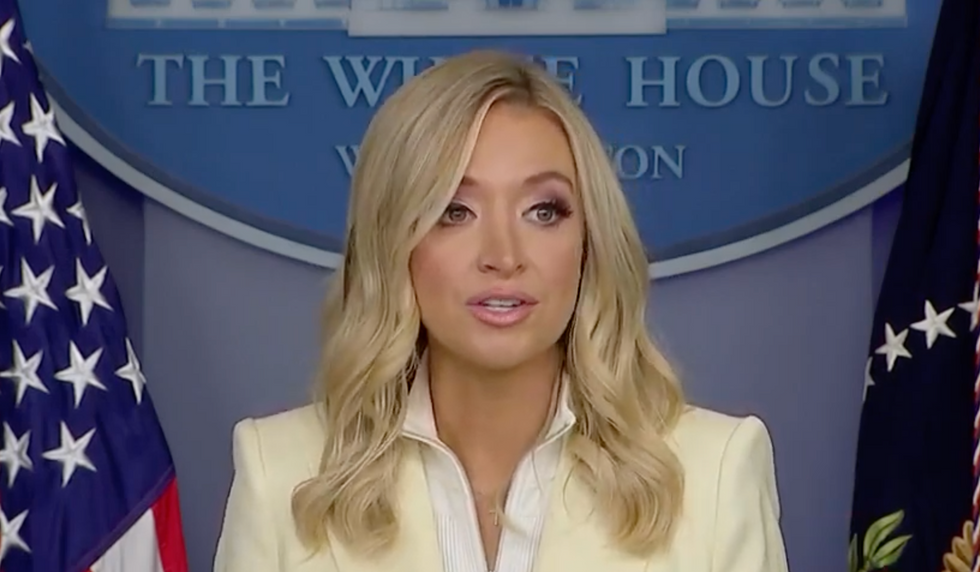 At the top of the day's press briefing, Trump delivered a short statement declaring that places of worship in the United States are "essential" and that all states must allow congregants to gather — with some measures of social distancing in place — this weekend.

Then he issued a pointed and over-the-top threat.

"If they don't do it, I will override the governors," Trump said.

But governors actually have expansive authority to enact public health measures in their states, and the federal government's right to interfere is extremely limited. It wasn't at all clear what authority Trump thought he had that would allow him to "override" governors making public health decisions, and he refused to stay and answer any questions after the statement.

It fell to McEnany to defend his remarks, and despite the fact that she likely had warning about his announcement, she was completely unable to offer an explanation.

"The president said he's going to 'override' the governors," noted NBC News' Kristen Welker. "Under what authority would he do that?"

"You're posing a hypothetical," McEnany responded.

"No, he said he would override the governors!" Welker shot back.

"The president stood there and said if governors don't listen, he's going to override their authority," Welker said once again. It should be noted that, as Welker was pointing out, it was Trump who initially posed the hypothetical — making it absurd for the White House to refuse to explain it.

McEnany continued to refuse to explain what authority Trump relied on for his threat, even as more reporters pressed her on it.

Putting aside the threat and its dubious legality, the push to reopen churches across the country looks incredibly premature. More than 1,000 people are still dying each day from the COVID-19 pandemic in the U.S. And the CDC just recently released a study showing how a church in Arkansas was linked to the spread of 35 cases of COVID-19 in March, leading to three deaths.

The White House offered guidelines for worship services to follow in order to reduce the risk, but it seems unlikely that these measures will be fully followed in the thousands of possible meetings across the country. And even with mitigation measures, we know that the virus readily spreads indoors, so any large indoor gathering still poses serious dangers. On top of all this, Trump's own actions are still discouraging the use of masks, increasing the peril of abandoning social distancing.