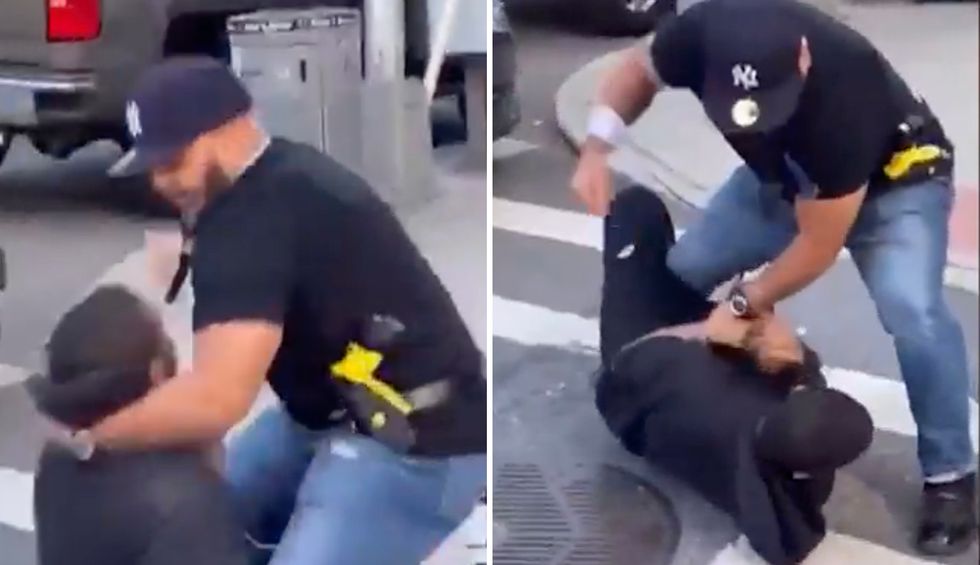 New York City has had more coronavirus-related deaths than any other city in the United States, and social distancing is still being aggressively promoted by Mayor Bill de Blasio and other officials. But de Blasio is speaking out this week about a video of an NYPD arrest that occurred in the East Village when officers were enforcing social distancing rules.

On Friday evening, NYC’s WABC-TV Channel 7 reports, officers arrested a couple for an apparent social distancing violation. Brooklyn resident Donni Wright was watching the arrest and ended up being arrested himself.

WABC-TV reports: “As a couple was being arrested, video shows one of the officers break away from that arrest to walk up to a bystander with his taser drawn — swearing and telling him to move back. Video showed the plain-clothes officer, who was not wearing a protective face mask, slapping 33-year-old Donni Wright in the face, punching him in the shoulder and dragging him to a sidewalk after leveling him in a crosswalk.”

Sgt. Mary Frances O'Donnell, an NYPD spokesperson, alleged that Wright “took a fighting stance against the officer.” But de Blasio’s response to the video has been highly critical.

“The video was very troubling, and what I saw was absolutely unacceptable — and obviously, the discipline was swift by the NYPD,” de Blasio asserted. “But I want to note that a video is more and more of a rarity. What you saw is more and more of a rarity. We still have more work to do, unquestionably, but the progress is very clear to see. Policing is changing in this city, has been changing... We’re not going to have that kind of behavior in our police force."

According to the NYPD Department of Internal Affairs, the incident is being investigated — and the officer who arrested Wright has been placed on modified duty.

NYPD Commissioner Dermot Shea said of the video: “I was not happy with what I saw. I think we can be better than that, quite frankly. But I think you need to look at it in the context of hundreds and hundreds of thousands of encounters across the city, whether it’s through routine encounters, arrests, taking guns off people without firing shots…. I think the de-escalation training that was put in place in years past and continues — it is yet another tool in the toolbox, and I think it's effective. I wish it was 100% effective, but that’s not, unfortunately, the world we live in.”