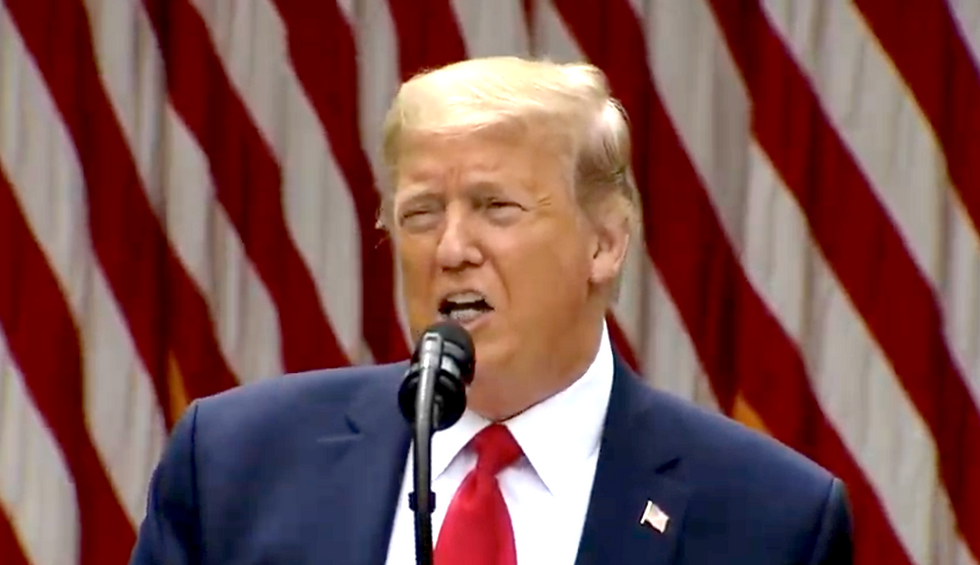 When the White House announced President Donald Trump would hold a press conference in the Rose Garden on Friday, many political reporters held on to their seats. Trump's performances are often unpredictable whirlwind displays, filled with lies, distractions, and attacks.

Already this week, Trump had tweeted a video in which a supporter of his said: "The only good Democrat is a dead Democrat." And Twitter decided to obscure one of his tweets on Friday morning because he had written "When the looting starts, the shooting starts" — a clear threat of violence toward the protesters in Minneapolis.

He had expressed support for George Floyd, the black man whose death under the knee of white cop triggered outrage and protest in the city. But the president reverted to form as Minneapolis police and protesters clashed, culminating in the violent use of tear gas, broken windows, apparent arson, and ongoing violence. He deemed the demonstrations to be filled with "thugs," despite having previously cheered on armed anti-lockdown protesters. On Friday, fired police officer Derek Chauvin was arrested and charged with Floyd's murder, and Attorney General Bill Barr announced a federal probe into the death — moves that many hoped may quell the unrest.

Meanwhile, the COVID-19 pandemic continues to rage in the United States; more than 1,200 people died from the disease on Thursday in the United States, according to Worldometer, and 22,000 more cases were discovered. Fears are growing that as social distancing measures have been relaxed around the country, new pockets of outbreaks emerge.

But Trump didn't address any of that in the Rose Garden on Friday — the ongoing pandemic, the rioting, the investigations, the charges, his own encouragement of violence. When he stepped up to the lectern, quite later than had been planned and flanked by some of his top officials what did he address?

Ah yes, China. Trump's chosen scapegoat for the pandemic and the more than 100,000 American deaths that occurred on his watch.

He blamed his predecessors in the Oval Office for failing to restrain China, while diving into a litany of the regime's abuses that have occurred during his presidency. The man who has claimed that his tough on China policy set him apart tried to blame the country for his own failures to contain the coronavirus. As he has before, he attacked the Chinese government for its concealment and deception about the virus in the early days, while accepting no responsibility for the fact that he, too, lied constantly about the risks and nature of the virus to the American people for much longer. And implicit in the story is that he swallowed China's propaganda about the virus completely, and in fact, he repeatedly praised China for its work to fight the virus and its transparency in the first months of 2020.

Trump also correctly noted that China is now moving to assert control over the independent Hong Kong, a disturbing extension of its authoritarian power and a devastating blow to freedom in the region. For this reason, the Trump administration is withdrawing its recognition of Hong Kong as a distinct entity deserving of special privileges and treatment. But Trump made no indication that China will pay a price for this breach, or suggest any path forward that would preserve the territory's independence. And while he blames other leaders for every bad occurrence that happens during their time in power, he took no responsibility for this development.

Finally, he came to the apparent kernel of news at the center of the Rose Garden event. The United States is withdrawing its support from the World Health Organization in the middle of a devastating global pandemic, he said, retaliation for what he perceives as China's undue influence over the organization.

While there's fair criticism to be made of WHO's deference to China, Trump's proposed solution, which he has floated previously, does nothing to solve the problem. It simply leaves China in place to further take control of the institution that has been key a player ameliorating global health crises over the decades, and it withdraws the United States from a position in which it can exert international leadership. While Trump said the United States' WHO funds will go toward other global health initiatives, it's not clear if any other body can take up the role the organization plays in fighting pandemics and coordinating international health efforts. Though this may be a "tough" move in Trump's mind, it may leave the entire world worse off in the middle of a pandemic — with no countervailing benefit.

And as Alex Ward of Vox pointed out, it's not even clear if Trump has the authority to withdraw the United States.

When Trump was done reading his teleprompter remarks in an almost bored monotone, he turned around and left the lectern, his aides who had stood beside him only as props in tow, with reporters calling out for him to take questions. What had been announced as a "press conference" turned out only to be a brief statement, wasting the time of all the reporters who had waited for Trump as the day ticked by. Reporters were stunned, having expected the president to address the many other issues roiling the nation. Instead, he seemed laser-focused on an issue he's trying to leverage for his re-election: demonizing China.

The world and country are in chaos and mourning, and it's clear both could use some leadership. But as many pointed out, it was probably better that Trump left the press conference without taking questions — his interactions with reporters have rarely if ever made anything better or clearer. He probably would have just stoked tensions among various groups even further.

Trump is incapable of being a leader for the country or the world. And it seems at this point, he's not even trying.