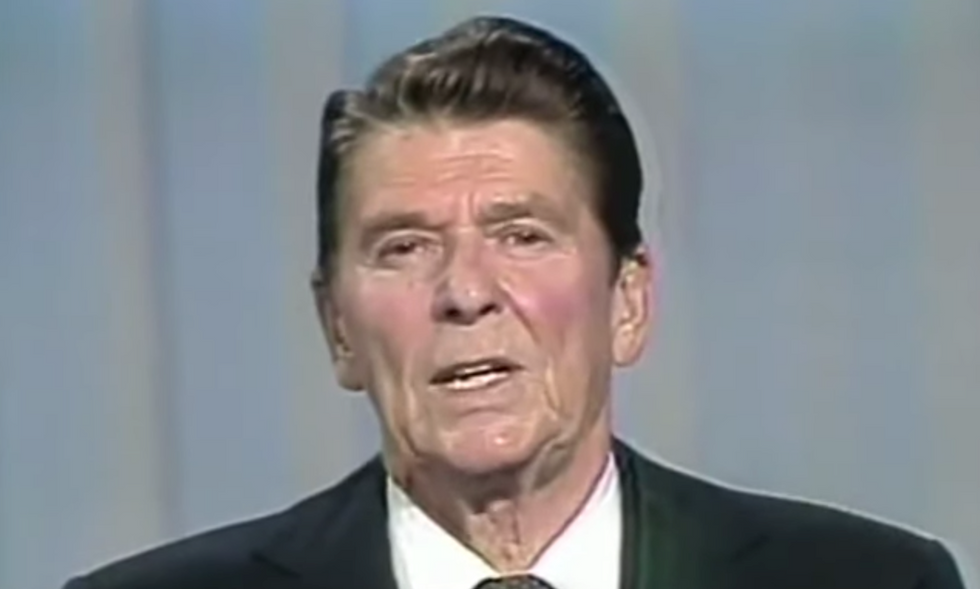 When Ronald Reagan ran against President Jimmy Carter in the 1980 election, the country was in turmoil. The unemployment rate was high, and so was inflation. The Iran hostage crisis had dominated the news, and Carter couldn't crack it. So when Reagan took to the debate stage a week ahead of the vote, he delivered a devastating argument for his candidacy that may well have propelled him to victory:

Next Tuesday is Election Day. Next Tuesday all of you will go to the polls, will stand there in the polling place and make a decision. I think when you make that decision, it might be well if you would ask yourself, are you better off than you were four years ago? Is it easier for you to go and buy things in the stores than it was four years ago? Is there more or less unemployment in the country than there was four years ago? Is America as respected throughout the world as it was? Do you feel that our security is as safe, that we're as strong as we were four years ago? And if you answer all of those questions yes, why then, I think your choice is very obvious as to whom you will vote for. If you don't agree, if you don't think that this course that we've been on for the last four years is what you would like to see us follow for the next four, then I could suggest another choice that you have.

The incisive attack wasn't necessarily fair. Countries can experience any range of shocks and tragedies that are no fault of the president at the time. And Reagan's economic policies were not the panacea he claimed them to be. But it was an impeccable volley in a political debate, and politicians have to play the hands they are dealt. Reagan took the opportunity to aggressively skewer his opponent, and the phrase "Are you better off than you were four years ago?" has become a perennial cliche of re-election politics.

In 2012, President Barack Obama won re-election, at least partly on the back of the sound belief among some that the country really was better off than it had been when he took office in 2009, in the depths of the financial crash. President Donald Trump was, until recently, clearly planning to run in 2020 on a similar platform, arguing that whatever you thought of his personal idiosyncrasies and least-popular polices, the economy had only grown under his stewardship.

Now, though, that clear test for re-election — fair or not, an accurate judge of a president's true acumen or not — is looking much worse for Trump. Are you better off than you were four years ago? Maybe some are, but many have lost their jobs or lost income. Many are hiding from a fearsome disease, or they're already sick, or they've lost loved ones. Even those who don't feel particularly at risk may look at a country and administration that appears completely unable to mount of a comprehensive strategy to take on the virus and will likely feel less secure in their government's ability to function as needed.

This is a big change. According to Gallup, as recently as January, 61 percent of respondents said they were better off now than they were four years ago. That was a significantly bigger number than the pollster has found in recent re-election races, and it likely would have given Trump at least something of an edge going into November. Now the advantage has evaporated, and the question's response now looks distinctly bleak for the president. And it's likely to get worse as the crisis continues and the recession deepens.

There may be ways Trump can mitigate the damage. If the pandemic recedes and the economy finds its footing, things could be looking up by November. If the president can harness any such enthusiasm, he may be able to claim credit for the rebound. And if he can convince voters — despite all the evidence of his incompetence and failures — that the pandemic and its damage wasn't his fault, he may be able to hold his office. But it's a tough argument to make, and the chances for a quick recovery look dim. We may even be facing a second, and possibly worse, wave of the virus by fall.

For former Vice President Joe Biden, running against Trump, the strategy for election is obvious. If you felt better off four years ago under Obama, in a time of plague, recession, and possible depression, voting for Biden to replace Trump should seem like the natural choice. Biden just needs to lay out the case.