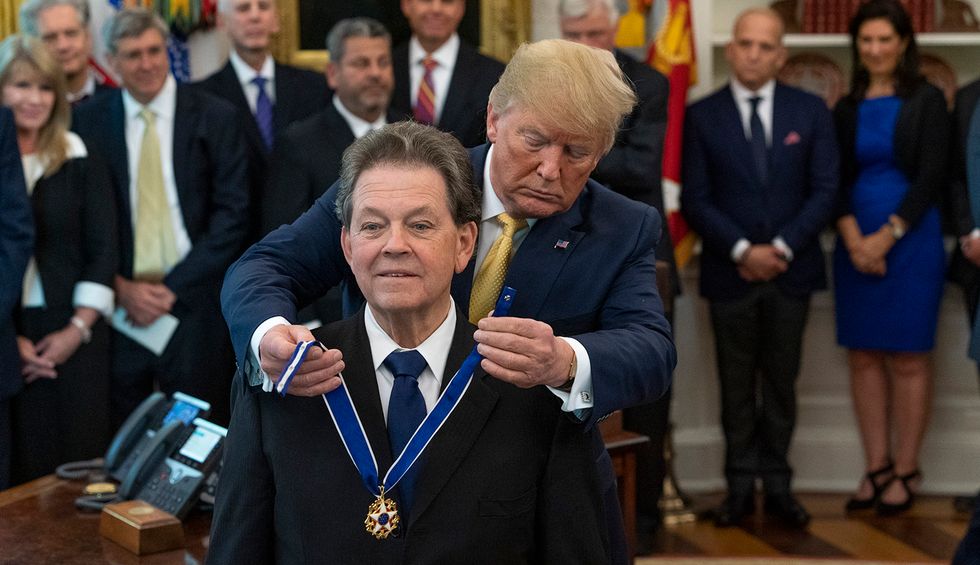 President Donald J. Trump presents the Presidential Medal of Freedom to economist Arthur B. Laffer, the “Father of Supply-Side Economics" Wednesday, June 19, 2019, in the Oval Office of the White House. (Official White House Photo by Joyce N. Boghosian)
Roger Sollenberger
and
Salon
May 27, 2020

Art Laffer, a member of President Donald Trump's coronavirus economic task force who last year was honored with a Presidential Medal of Freedom, once referred to the federal minimum wage law as the "Black Teenage Unemployment Act" on Fox News while he attempted to claim that it made "no sense whatsoever."

"The minimum wage makes no sense whatsoever to me," Laffer told host Jenna Lee on the since-canceled Fox News show "Happening Now." "Honestly, it's just the teenage — 'Black Teenage Unemployment Act.' And this is the very group that we need to have jobs — not be put out of work because of a minimum wage. So, I'm very much in favor of, at least for teenagers, getting rid of the minimum wage."

The video clip was recently resurfaced on Twitter by Nashville attorney James Mackler, a Democratic candidate for the U.S. senate in Tennessee.

Laffer was named to the White House coronavirus economic task force after Fox News host Sean Hannity called on the president to do so in April. One year prior, Trump awarded Laffer the Presidential Medal of Freedom for his work in the field.

"Art drew on his napkin a series of lines and a curve that changed history," the president said during that ceremony. "With the now famous 'Laffer Curve' — still, a very, very highly-respected economic curve — Art showed that if tax rates are too high, people stop spending. And they stop investing."

The curve is not-highly respected, and Laffer did not invent it. Rather, he gamed it into a theory in the '80s as economic adviser to former President Ronald Reagan. That theory birthed Reaganomics, the supply-side policy which promptly sent the U.S. careening into a massive budget shortfall, which blew up the national debt.

Laffer has since earned rebuke from economists across the ideological spectrum after budgets cratered in two Republican-led states, including Kansas, where he personally advised the governor. His work with Trump dates back to the 2016 campaign, after which longtime associate Stephen Moore, another discredited conservative economist, co-wrote a panegyric to the administration's economic policies. (Trump later considered Moore to run the Federal Reserve.)

Though the task force got off to a rough start, both Laffer and Moore have played key roles on it, working closely with the president's son-in-law and top adviser Jared Kushner.

A few weeks ago, Kushner put forward a controversial relief plan backed by Laffer and Moore. The proposal, called the "Eagle Plan," would give Americans the option to collect a $10,000 upfront payment in exchange for cuts to retirement benefits, including Social Security.

White House spokesman Hogan Gidley told The Washington Post that the "Eagle Plan" was "ludicrous on its face" and does not have Trump's support.

However, it was reported as recently as last week that the White House was considering an eerily similar proposal. In it, Americans can opt to take a $5,000 Social Security loan from the government — with interest — which they would later repay by putting their entire benefit towards restitution until the loan is paid in full.

"I call these people the modern-day Rosa Parks," Moore said at the time. "They are protesting against injustice and a loss of liberties."

You can watch the Fox News clip below via Twitter: