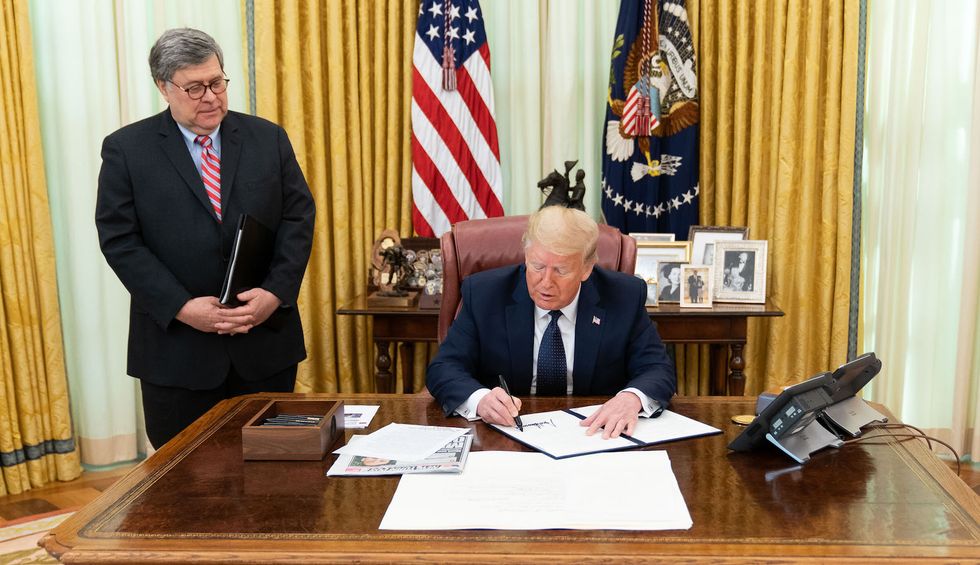 For years, Donald Trump and the conservative world in general have been in an uproar over what they claim is a left-wing assault on "free speech." Actual instances of conservatives having their First Amendment rights constrained by government censorship have been thin on the ground, of course, if not nonexistent. So conservatives have had to improvise, expanding the bounds of "free speech" to encompass their vague right not to be criticized, their right to harass other people without consequences, and their right to hijack the resources of private companies in order to blast hateful or false ideas as far and wide as possible.

Classics of the genre of "free speech" whining:  Conservative columnist Bret Stephens declared that it was an assault on "free speech" for liberals to criticize the way the New York Times portrays Nazis. Stephens' Times colleague Bari Weiss portrayed a group of pseudo-intellectual right-wingers as free-speech martyrs because meanie leftists make fun of them. Trump held a "free speech" event at the White House featuring no actual victims of government censorship, but a guest list heavy with people who are frequently accused of lying, spreading conspiracy theories and outright racism. Trump signed a "campus free speech" executive order surrounded by conservative activists whose main complaint was that other students and professors speak freely in ways that make them feel ashamed or uncomfortable.

It's always been obvious that for Trump and other conservatives who whine about "political correctness," the entire concept of freedom of speech had nothing to do with the constitutional bar on government censorship. It was always about asserting their presumed privilege to say bigoted, stupid or false things with no pushback or correction from other people using their own free-speech rights. In case you've felt any doubt about the depth of right-wing hypocrisy on this issue, the past week should erase it.

Trump has been on a lengthy tantrum all week because Twitter — using not just its free-speech rights but its right, as a private company, to control who uses its platform — has decided, after all this time, to add some gentle context to the president's increasingly deranged tweets. There's been a growing uproar over Trump using Twitter to accuse MSNBC host Joe Scarborough of murder, culminating in the widower of the alleged victim (who actually died in a tragic accident) writing a letter asking Twitter to ban Trump because of the pain these false accusations are causing.

In apparent response, Twitter has started putting warning labels on some Trump's tweets in which he overtly lies or encourages violence. Of course they haven't done this to all tweets of this nature, or the presidential feed would be nothing but warning labels. But Twitter did add links to two of Trump's tweets spreading lies about mail-in ballots, pointing users to factual information about voting. In the early hours of Friday morning, Twitter also added a warning to a Trump tweet in which he apparently encouraged police to kill civilians in Minneapolis, where protests against police violence have escalated into widespread unrest that has included some reported damage to private businesses.

Twitter is only doing what free-speech advocates — real ones, not the fake right-wing ones — have always offered as the best way to counter hate speech and lies: The way to fight bad speech is with more speech. Trump was not "censored," and since Twitter isn't the government, whatever decisions it makes can't violate the First Amendment in any case. On the contrary, the company is using its free-speech rights to add context and information, which are critical for robust political debate in a democracy.

Trump responded by signing an incoherent executive order threatening to shut down Twitter or any other social media platforms that offer such fact checks. He issued a high-minded statement about "free speech," but the reality here is that he is literally threatening government censorship — a textbook First Amendment violation — to keep a company from freely offering information to the public. This perfectly distills what right-wingers mean when they talk about "free speech" — their privilege to speak without criticism or correction, a privilege that can only be secured by silencing others.

While this is all going between Silicon Valley and Washington, out in middle America, we're getting an eyeful of how little free speech actually matters to conservatives, as police in Minneapolis have shut down the ability of citizens to protest police violence — and have even attacked the free press for covering what's going on.

Things kicked off on Tuesday, when police used a few broken windows and spray paint as a pretext to fire canisters of tear gas at peaceful protesters, sending them scattering in all directions. The protesters were there to express anger over the death of George Floyd at the hands of a now-fired Minneapolis police officer named Derek Chauvin, who knelt on Floyd's neck until he died while Floyd himself, and a crowd of onlookers, pleaded for his life.

There can be no doubt about what happened on Tuesday: The police didn't approve of the protest and seized on the thinnest of excuses to shut it down with violence. So things are spiraling out of control in Minneapolis, where people were actually denied their First Amendment right to free assembly and peaceful protest and are understandably furious.

On Friday, the actual assault on free speech by police was crystallized further as police arrested a CNN reporter named Omar Jimenez, live and on air. Jimenez was doing nothing illegal, but was trying to cover the no-longer-peaceful protests, which is his job. In fact, in the video you can hear Jimenez telling police that he and his crew will go wherever police tell them to, as long as they can keep the cameras rolling. But the police arrested Jimenez, along with producer Bill Kirkos and photojournalist Leonel Mendez, for no apparent reason — other than to suppress coverage they didn't like.

Between Trump's tantrum and the brutal suppression of free speech by police in Minneapolis, we're getting a clear picture of how the American right really feels about free speech. Protests are shut down, journalists are arrested. The president is gleefully fantasizing about using property damage as an excuse to kill protesters, and then flipping around and threatening to shut down a tech company for the sin of countering his lies with truth. (Which is truly the least they can do, after all this time.) Taken together, what we see is an American right that is happy to bring state power to bear in order to silence people who speak out against racism or who correct right-wing misinformation.

So when you hear conservatives waxing poetic about "free speech" and the supposed evils of "political correctness," know this: It's total bullshit. They're asserting a made-up special right to spew noxious lies and hate speech, totally free of criticism or consequences, while everyone else is obliged to shut the hell up. That was always true, but looking at this terrible week in America, it should be undeniable.