'Trapped in a nightmare situation': Philippines typhoon offers glimpse of climate disaster amid a pandemic 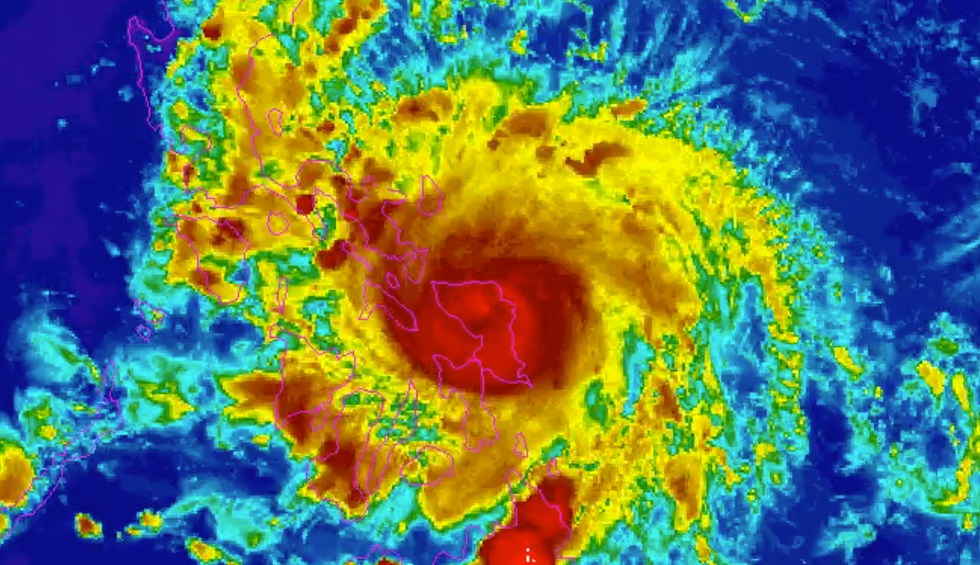 The worldwide outbreak of a deadly virus is now dovetailing with another grave global threat: increasingly hazardous extreme weather due to the climate crisis.

Typhoon Vongfong slammed into the eastern Philippines on Thursday, making the first of numerous landfalls expected in the coming days and causing tens of thousands of people to contend with evacuations complicated by health risks of crowded emergency shelters due to the ongoing coronavirus pandemic.

The first typhoon of the 2020 Western Pacific season, known locally as Ambo, made landfall over San Policarpo in the Eastern Samar province of the Philippines at 12:15 pm local time, according to the Philippine Atmospheric, Geophysical, and Astronomical Services Administration (PAGASA).

The Southeast Asian country, a cluster of over 7,000 islands in the Western Pacific Ocean, is home to about 106.7 million people. The Johns Hopkins global coronavirus tracker on Thursday showed that the Philippines had over 11,800 confirmed Covid-19 cases and at least 790 related deaths, though those figures may be too low due to limited testing.

"Provincial and city governments, many of which are already strapped for resources due to the outbreak, are grappling with logistical and space issues, with an estimated 200,000 people needed to be moved from their homes in coastal and mountainous areas because of fears of flooding and landslides," Reuters reported. "With an average of 20 typhoons every year hitting the Philippines... challenges faced by stretched-thin local governments offer a grim preview of disaster response in the time of Covd-19."

On the Island of Samar, the powerful typhoon "sheared roofs from houses, uprooted coconut trees, and dumped heavy rain as it made landfall," according to Agence France-Presse. The news agency detailed how even though the Eastern Samar province doesn't yet have any confirmed Covid-19 cases, public health concerns still made efforts to shelter impacted residents more difficult:

Because of the twin threat of the storm and the virus, evacuation centers in the central Philippines said they will only accept half their capacity and evacuees will have to wear face masks.

Hundreds of thousands live in coastal areas and flimsy homes near where the storm blasted ashore, and tens of millions more on the storm's forecast path that runs near the capital Manila.

"We are trapped in a nightmare situation where we face the threat of the storm as well as Covid," evacuee Mary Ann Encinares said at a shelter, where she and her children had fashioned masks out of handkerchiefs and rubber bands.

As the region was battered Thursday by intense wind and rain, Eastern Samar Gov. Ben Evardone explained in an interview with CNN Philippines how the provincial government was struggling to safely shelter residents, especially considering that evacuation centers were recently converted to quarantine facilities.

"It's a complicated situation right now in the province. We prepared our evacuation centers for Covid-19, but we have to deal with the evacuees of Typhoon Ambo. This is a nightmare for us here," he said. "Our problem right now is how we are going to place our people inside and how we are going to practice social distancing inside the evacuation centers."

Further complicating the government response, Evardone said, some municipalities were experiencing communication disruptions because of power outages. He added that because "we have been dealing with this Covid crisis in the past two months, and most of the resources of the [local government units] are depleted right now."

"Right now, the case with the typhoon is urgent," said the governor. "But we will not scale down our Covid-19 monitoring, because this will cause more danger and it's for the long term."

There were no immediate reports of deaths or serious injuries from the storm, but the Associated Press noted that "the impoverished eastern region initially hit by Vongfong was devastated in 2013 by Typhoon Haiyan, which left more than 7,300 people dead or missing, flattened entire villages, swept ships inland, and displaced more than five million"—an example of the kind of disaster that could strike the country as both the tropical cyclone season and pandemic continue in the months ahead.

The New York Times reported on Typhoon Vongfong's expected path for the weekend:

Forecasters predicted that it could dump torrential rains by Saturday across a wide area of the Philippines, including possibly Luzon, the country's largest island, which has a population of 60 million and includes the capital, Manila.

Much of Luzon remains on lockdown because of the coronavirus epidemic, which could complicate emergency efforts should the storm strike the island with particular force.

"Definitely this is going to add to our emergency situation," said Harry Roque, a spokesman for President Rodrigo Duterte. "While the areas expected to be hit by the typhoon are not heavily ravaged by Covid-19, we have set some guidelines."

Roque conceded that based on previous evacuations prompted by typhoons, enforcing the government's strict social distancing guidelines "would be a challenge."

The environmental advocacy group 350.org has spearheaded the international demand for a "just recovery" from the pandemic that pairs economic relief with climate action. On Twitter Thursday, the group connected the typhoon in the Philippines to the simultaneous public health and climate crises:

Some research has shown that landfalling typhoons over the northwest Pacific have intensified since the late 1970s.

A 2016 study found the destructive power of typhoons striking East Asia had intensified by 50% over the preceding four decades because of warming coastal waters. Lead author and University of North Carolina at Chapel Hill professor Wei Mei said at the time that "we want to give the message that typhoon intensity has increased and will increase in the future because of the warming climate."

As Typhoon Vongfong made international headlines Thursday, the Weather Channel also reported on a development halfway around the world: "The first depression or storm of the 2020 Atlantic hurricane season is expected to form near the Bahamas this weekend, but will only bring a glancing blow of rain to parts of Florida, and high surf to parts of the Southeast coast."