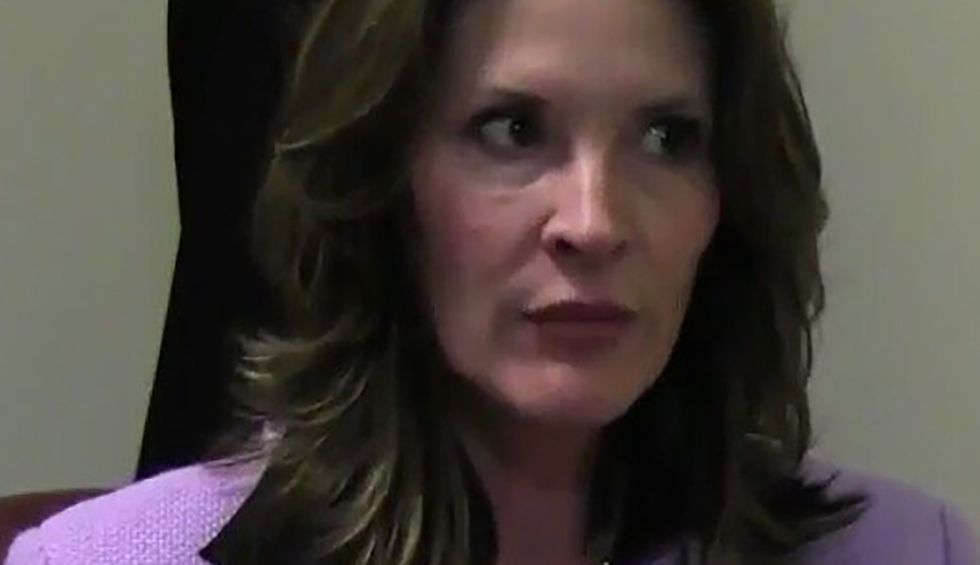 Janice McGeachin probably holds the highest elected office of any explicit far-right “Patriot” extremist in the United States: Idaho’s lieutenant governor is an unabashed fan of the “Three Percent Militia,” is happy to pose with men flashing the “OK” hand signal, is closely allied with a key figure in the 2014 Bundy Ranch standoff in Nevada, and is unperturbed  when supporters tell her, “I’m proud to be white again!”

So it’s not surprising to find her on the front lines of the Idaho far right’s pushback against the state’s COVID-19 stay-at-home orders, alongside such other “Patriot” luminaries as Ammon Bundy and his cohort of anti-vaccination fanatics.

McGeachin, a former legislator from Idaho Falls, recently reopened the tavern her family owns in her hometown, in defiance of Gov. Brad Little’s stay-at-home orders, which recommended businesses in the state remain closed until June 13.

"As Lieutenant Governor, I am one heartbeat away from the governor’s chair. I am also a small business owner,” she opined in The Idaho Press a few days earlier:

My family and I own four small businesses in the restaurant and automotive industries, employing hundreds of Idahoans. … I lose sleep at night because the heavy hand of our government is hurting so many Idahoans. Idahoans were sidelined and left to watch silently as the government closed Main Street by unilaterally deciding which businesses were “essential” and which ones were not.

… While most Idahoans supported the public safety aspect of the Governor’s Stay-At-Home Order, the one thing that is missing in all of this is the confidence that Idahoans are smart enough to put in place public health protocols so they can reopen their business, welcome customers, and take care of their employees.

Though both are Republicans, Little and McGeachin have a contentious history, dating back to the 2018 election in which both of them won higher office. And since the pandemic, she’s not the only far-right figure to attack Little publicly: Her legislative cohort, Rep. Heather Scott of Sandpoint, attacked the governor for his COVID-19 measures in a radio interview.

“I mean, they are already calling him ‘Little Hitler,’ ‘Governor Little Hitler,’ and so I think people will start educating others and people will be more and more vocal until they will say ‘enough of this’ and put the pressure, hopefully political pressure on him,” Scott said.

Little, widely considered a business-oriented Republican, has generally worked to steer away from politics in discussing the pandemic, suggesting that his critics are out of step with most Idahoans—a point reinforced by polls showing over 65 percent support in the conservative state for the governor’s orders. “The vast majority of the people are all-in on this,” Little told a gathering of retirees last week.

McGeachin has a history of dalliances with Idaho’s “Patriot” far right, including her purported use of “Three Percenter” militiamen as security during her 2018 campaign. Asked by the Idaho Statesman for information about her security staff, McGeachin’s campaign flatly refused.

During the campaign, one of her supporters chimed in on one of her pro-Trump Facebook posts, declaring: “I’m proud to be white again! Go Trump and may God be on your side Janice McGeachin this November!” McGeachin responded: “Thank you Bob!”

Asked by Idaho Reports whether she supported the man’s sentiment, she responded: “I hope the voters in Idaho know that I believe that our country should celebrate diversity. My ‘thank you’ was in response to his support of Trump and my campaigns.”

After winning the election, McGeachin maintained her relationship with militia figures, primarily Eric “E.J.” Parker, currently a legislative candidate who previously stood trial for infamously pointing his rifle at federal agents during the Bundy ranch standoff (but won acquittal). In April 2019, while serving on a temporary basis as governor, she administered an oath of office to a cadre of militiamen, including Parker, at an antigovernment rally, swearing the group of mostly untrained vigilantes in as full members of the National Guard in Idaho.

At the same rally, she voiced her support for jailed Bundy ranch figure Todd Engel, an Idaho native serving a 14-year sentence for his role in the standoff, by posing with two militiamen dressed in prison garb. The two men flashed “OK” signs—which serves as a hand signal both for “Three Percenters” and for white nationalists—while McGeachin flashed a heart-shaped hand signal.

The post—later removed—read: “Sending love to Todd Engel from the Idaho Capitol and ‘getting to know’ the new Senate Pages.”

As Justin Rorhlich at The Daily Beast reported, McGeachin more recently appeared alongside Parker, Bundy, and Idaho Freedom Foundation president Wayne Hoffman at a May 1 “Liberate Idaho” rally in Boise. In his speech at the rally, Bundy compared Idahoans under lockdown to Jews before the Holocaust:

Just look at the pictures of the Holocaust. It always amazes me how you see pictures of men and women stripped completely naked, lined up and facing a mass grave, where they are shooting them in the back of the head and falling in the grave.

Now the answer to that is not easy—but it is this, and I have been there and I know for a fact that this is true. When you have faced so much tyranny in your life, there is a point when you would rather line up naked and get shot in the head. And my friends, why we’re here today right now is to make sure that never happens!

McGeachin left that protest and flew to the northern Idaho town of Kendrick, accompanied by Idaho GOP chairman Raul Labrador, and appeared at a rally in support of the reopening of the Hardware Brewery, a local brewpub that was defying the governor’s closure orders. McGeachin said Little was abusing his power to “harass and intimidate private businesses.” Like Ammon Bundy, Christine Lohman, the brewery’s co-owner, compared Idaho to Nazi Germany under the pandemic measures.

“Brad Little has acted like a Democrat through this whole thing, and the people know it,” Lohman told Rohrlich. “These are people who want their freedom. This is the perfect time for America to fight for its civil rights.”