The last time Obama was in the spotlight during Trump's presidency, he became even more popular 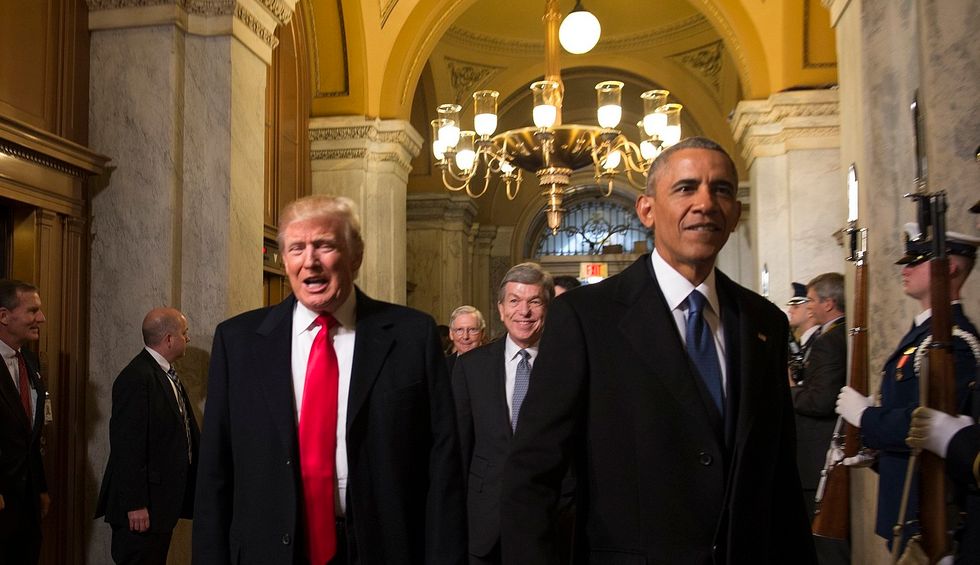 President-elect Donald J. Trump arrives with U.S. President Barack Obama at the Capitol for the 58th Presidential Inauguration in Washington, D.C., Jan. 20, 2017. More than 5,000 military members from across all branches of the armed forces of the United States, including reserve and National Guard components, provided ceremonial support and Defense Support of Civil Authorities during the inaugural period. (DoD photo by U.S. Air Force Staff Sgt. Marianique Santos)
Kerry Eleveld
and
Daily Kos
May 25, 2020

Donald Trump's latest obsession with taking on Barack Obama as an electoral strategy is among the dimmest ideas he's probably ever had, as Daily Kos founder Markos Moulitsas pointed out last week.

But Trump’s scheme gets even dumber when one starts perusing the data points from the last time Obama stepped back into the spotlight during Trump’s tenure—the final month before the 2018 midterms.

But even beyond that, look what happened to Obama’s favorable ratings on Civiqs once he hit the campaign trail—they improved. Unlike Trump’s coronavirus briefings, the more people saw of Obama, the more they liked him, and that was almost entirely due to his improvement among independents, as you can see in the second graph below. In the first graph of all respondents, Obama nets a very modest boost of a couple points, but once you zoom in on independents, that’s the real game changer.

In early October, Obama hits an exactly even 47%-47% favorable/unfavorable rating among independent respondents. But by mid-November—after Obama’s made a couple waves of endorsements and done several high-profile rallies, his overall rating made a net improvement of plus-five points to 50%-45% favorable.

Also, if you get into the weeds of Obama’s versus Trump’s endorsements, Obama took slightly riskier bets on candidates (compared to Trump’s much safer bets) and still performed better than Trump, according to a Brookings analysis.

So yeah, have it, Trump. Obama’s the best possible reminder of when American life was still sane and prosperous and the U.S. wasn’t the laughingstock of the world.