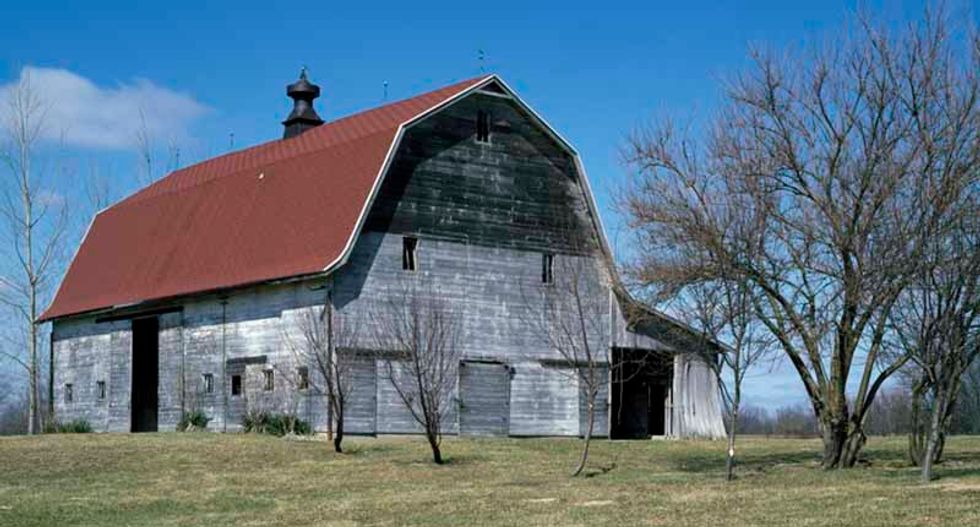 This image is available from the United States Library of Congress's Prints and Photographs division under the digital ID highsm.13159.
Hunter
and
Daily Kos
May 11, 2020 Personal Health

As Donald Trump declares victory, pushing for an end to pandemic control measures even while acknowledging it will cause many more Americans to die, and Republican governors declare victory, writing pompous self-laudatory editorials while COVID-19 deaths in their own states escalate, two things are now evident.

One: The number of American deaths in the COVID-19 pandemic is about to skyrocket.

Two: It is rural America that will be doing much of the dying. This is now all but certain. And Americans in those smaller towns need to prepare themselves for what's coming.

An Associated Press report gives a hard-to-stomach snapshot of the pandemic in rural southwestern Georgia. There are not as many deaths as in New York City, but the deaths spread nonetheless, and in small towns with tighter-knit communities than the larger cities that have gotten most of the press attention in the early first wave of the pandemic, the deaths spread through families and small churches in the same proportions that they do in high-rise apartment buildings and large conference centers. If you know someone who has died from the pandemic, in these towns, you are almost certain to soon know another.

And so the funerals stack up, and the gravesites fill with people you know. A 29-year-old man whose parents died in two separate, distant hospitals because there is no longer a local one gives a reflection that should instead serve as warning: “People you’re normally waving at, speaking to in passing, at the pharmacy, you’re never going to see them again.”

It is the people who have not lost family members and who believe themselves to live in areas the virus cannot cross to that are doing the protesting to reopen. This includes Trump, and state governors, and people who other Americans cannot meet with without an appointment and without being temperature-checked so that the virus does not spread to anyone our great economy cannot afford to lose. I never thought the virus would take someone so close to me, some of the same sign-wavers will be saying in interviews many months from now. Because the virus was not here, I thought the virus would never be here.

We are a passionate country, to be sure, but nobody can accuse us of being too clever. Or maybe there is another explanation: as the AP notes, the two groups most affected by the pandemic's sweep through rural towns are Black Americans and the working poor. There seem few representatives of either group among the sign-holding protesters demanding that their states "reopen," or bellowing that an elevated number of deaths is simply a price America must pay in order to keep our businesses running.

Here is what will be happening next, based on what is happening right now. In Grand Island, Nebraska, the rate of coronavirus infection is now substantially above that of New York City, fueled mostly by an outbreak at the local meatpacking plant. As the Wall Street Journal reports, the city has no plans to issue shelter-in-place orders, because the town's "essential" factory jobs are not ones that can be done remotely. The county has nearly 1,300 COVID-19 infections.

This is what we’re currently seeing, and will be seeing more of: small towns reliant on one or a few major employers, with the rest of the town economy underpinned by those large-scale businesses, will become hotspots if and when the virus vectors itself, via a single unfortunate employee or visitor, inside. From there the pandemic will travel to families, and to local businesses, and as in Grand Island it will be helped along by elected officials' reluctance to close those large plants despite health officials' urgings to do so.

The medical facilities in those small towns—if any exist—will be more quickly overrun than in urban centers. People will die of the disease in greater proportion than they have in New York City, but those deaths will be less visible because they are in places that are far away from the cameras. We will learn about it only later.

The most surreal part about all of it is that we know it's going to happen. There is no question. The virus continues to expand into new places, as we always knew and expected it to; the purpose of the lockdowns was to delay each new hotspot so that even if individual counties became overwhelmed, we could move the patients somewhere that was not. But it's the places where the virus has not yet appeared that are the most irritated by lockdown orders keeping the virus from them—for a time—and in the small towns that have become hotspots due to a single major employment center, officials seem most bent on risking a few more lives to save a few more jobs.

If we're very lucky, we can at least put off this new rural wave for a few more months. But we have done little that would deserve such luck—and a great deal to make sure it happens sooner.