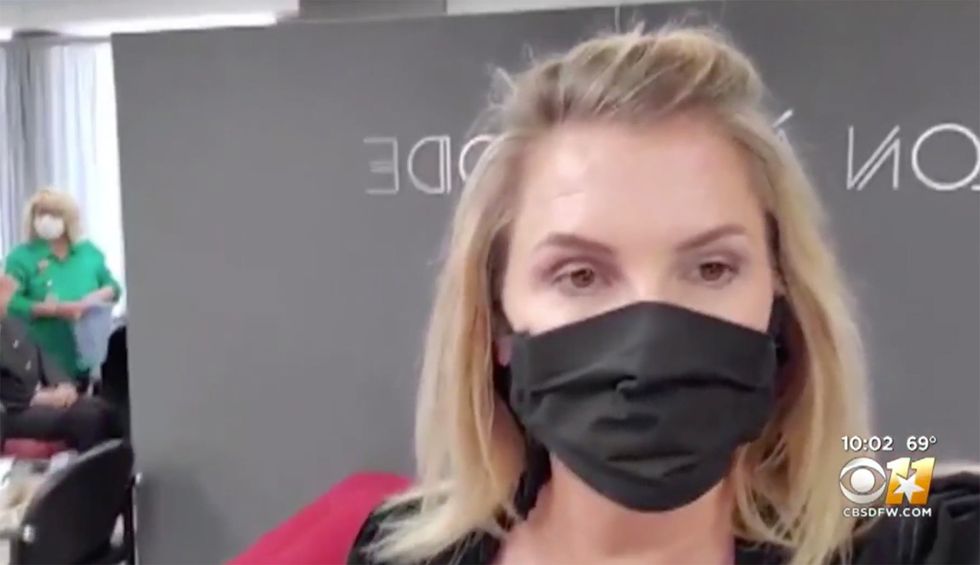 Image via Screengrab.
Cassandra Pollock
and
The Texas Tribune
May 07, 2020

By Cassandra Pollock, The Texas Tribune

"Texas Supreme Court orders release of Dallas salon owner who was jailed for ignoring shutdown order" was first published by The Texas Tribune, a nonprofit, nonpartisan media organization that informs Texans — and engages with them — about public policy, politics, government and statewide issues.

The Texas Supreme Court on Thursday granted a motion to release Dallas salon owner Shelley Luther, who was sentenced to seven days in jail for defying orders to keep her business closed during the pandemic.

The order came soon after Gov. Greg Abbott announced he was modifying his recent executive orders related to the coronavirus pandemic to eliminate jail time for Texans who violate them. The move by Abbott was an attempt to release Luther, and prevent the jailing of others who have violated similar orders in recent weeks.

Luther, who state district Judge Eric Moyé found in contempt of court earlier this week, kept her Salon a la Mode running while violating local stay-at-home orders and despite receiving a cease-and-desist letter from Dallas County Judge Clay Jenkins, as well as a temporary restraining order Moyé signed that told Luther her business must remain closed.

“Throwing Texans in jail who have had their businesses shut down through no fault of their own is nonsensical, and I will not allow it to happen,” Abbott said in a statement, adding that his order is retroactive to April 2 and supersedes local directives. "As some county judges advocate for releasing hardened criminals from jail to prevent the spread of COVID-19, it is absurd to have these business owners take their place.”

Abbott in his statement also mentioned that his modifications “may also ensure” that others in similar cases “should not be subject to confinement.” Abbott referenced Ana Isabel Castro-Garcia and Brenda Stephanie Mata, who last month were arrested and charged with violating the community’s emergency management plan, according to the Laredo Morning Times.

The Laredo Police Department said it would respond to Abbott's announcement soon, while a spokesperson for Dallas County was not immediately available for comment.

Abbott's order Thursday comes a day after he and other top Texas Republicans weighed in on the controversy surrounding Luther, with the governor saying that Moyé had taken "excessive action" and suggesting that "there are less restrictive means" than jailing Luther. At the time though, Abbott did not indicate whether he planned to wade in further — which disgruntled some hardline Republicans who had been calling on the governor to commute Luther's sentence.

Attorney General Ken Paxton, meanwhile, called for Luther's immediate release in a statement and in a letter to Moyé on Wednesday.

“I find it outrageous and out of touch that during this national pandemic, a judge ... would jail a mother for operating her hair salon in an attempt to put food on her family’s table,” Paxton said, calling Moyé’s order to jail and fine Luther thousands of dollars “a shameful abuse of judicial discretion.”

Later Wednesday, Moyé, along with the 11 other state civil district judges in Dallas County, signed onto a letter to Paxton calling his correspondence "an ex parte communication about a pending case."

"In this context, for you to 'Urge' a Judge towards a particular substantive outcome in this matter is most inappropriate and equally unwelcome," read the letter, which was reported by WFAA. "Please do not communicate with the Court in this manner further."

This article originally appeared in The Texas Tribune at https://www.texastribune.org/2020/05/07/texas-dallas-salon-owner-coronavirus/.