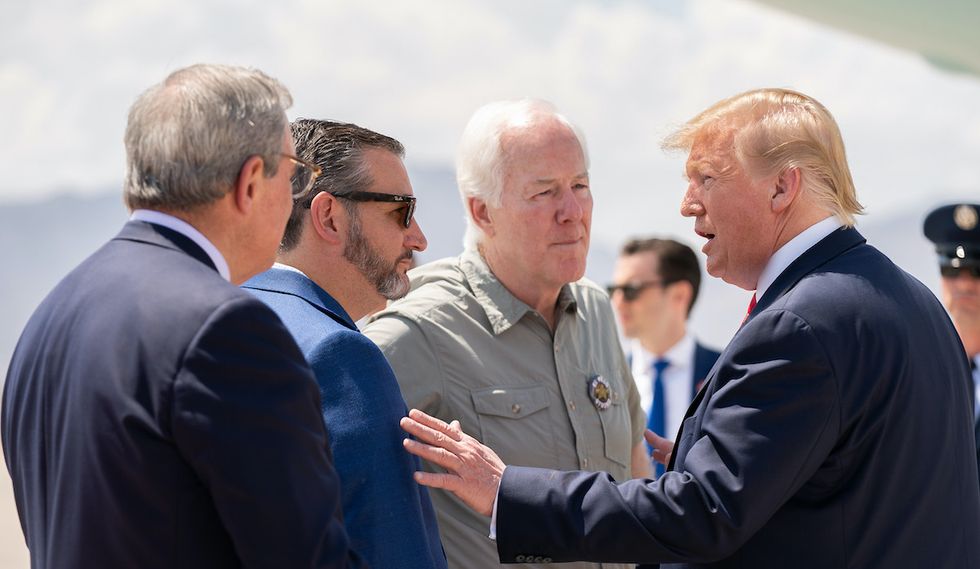 By Cassandra Pollock and Stacy Fernández, The Texas Tribune

"GOP lawmakers got illegal haircuts while calling on Texas Gov. Greg Abbott to reopen salons" was first published by The Texas Tribune, a nonprofit, nonpartisan media organization that informs Texans — and engages with them — about public policy, politics, government and statewide issues.

On Tuesday, state Reps. Steve Toth and Briscoe Cain sat wearing barbers' gowns in a Houston-area salon, ready for their haircuts. Both Republicans were breaking state law by doing so, but to them, it mattered no less — one was there to send a message to Gov. Greg Abbott, and the other was there as an act of civil disobedience.

“A little less on the sides,” Toth, from The Woodlands, told the hairstylist while on the phone with a Texas Tribune reporter, noting that "there's absolutely no reason" why such businesses couldn't reopen their doors under proper health guidelines during the coronavirus pandemic.

"I think these businesses need to be open," Cain, from Deer Park, told Fox 26 while getting his haircut.

Hours later, their wish was granted: Abbott announced that hair salons and barber shops were among the businesses that could begin to reopen Friday — several days earlier than he had previously signaled.

The news, made during a press conference at the Texas Capitol, added on to an announcement the governor made last week that allowed businesses such as movie theaters and malls to reopen under certain restrictions. And it alleviated pressure that Abbott had been fielding in recent days from mainly Republicans, who argued their constituents needed the businesses they either worked at or owned to reopen because their livelihoods depended on it.

"When you're Greg Abbott and you have people screaming in your ear, you have to find a creative way to communicate with him; he's going 24/7 right now," Toth told the Tribune on Tuesday evening. "We wanted to get a message to the governor — everyone has to take a different tack trying to make sure the governor knows what our constituents are thinking."

Hailey Lankford, a stylist at Tune Up: The Manly Salon in Montgomery County, where Toth and Cain got haircuts, said before Abbott's announcement Tuesday that it’s “essential” for her to go back to work.

“If I do not go back to work, my car will be [repossessed], I will be evicted, I have no choice,” Lankford told the Tribune. “I’m not getting the money from the government along with a lot of other hairdressers I know.”

The salon reopened over the weekend but was quickly shut down by local law enforcement officers who threatened to arrest Lankford and her colleagues if they didn’t close, Lankford said. She added that Tuesday was the salon's first day reopening since that visit from law enforcement. Toth said Tuesday that about three other customers were in the salon while he and Cain were receiving their haircuts.

Cain, for his part, said he was aiming to set an example for constituents — and that his decision to go to the salon Tuesday was simply him carrying out what he has been saying on social media in recent days.

"For me, it was an act of civil disobedience, but it wasn't personal," Cain told the Tribune later Tuesday. "If you've been following my Twitter feed, I was encouraging people to do this — if I was going to encourage others, I should do it myself — to encourage customers to go to any business, whether it's been deemed 'essential' or not, so we can help provide these business owners and employees an income so they can pay their bills."

To be clear, the Houston-area salon was not the only nonessential business going against official orders that shut down many businesses. The city of Dallas is suing the owner of Salon a la Mode for reopening despite local stay-at-home orders. On Tuesday, salon owner Shelley Luther was sentenced to a week in jail for violating a court order to close.

Democrats, meanwhile, argued after Abbott's announcement Tuesday that he was acting prematurely — and that moving to open more businesses in such short order could put Texans at risk.

“From Donald Trump to Greg Abbott to Briscoe Cain and Steve Toth, Texas Republicans have mismanaged and downplayed the seriousness of the coronavirus crisis. It’s time for sensible leadership that keeps the public safe," said Abhi Rahman, a spokesman for the Texas Democratic Party.

Cain, who has also grown a mustache during the pandemic, said he is ready for life to return to some version of normal so that his wife can shave it off.

"I fully realize it's disgusting and needs to go," he said Tuesday evening, "but my mustache is part of me being in mourning for the loss of our civil liberties."

This article originally appeared in The Texas Tribune at https://www.texastribune.org/2020/05/05/texas-salons-not-open-illegal-haricuts/.