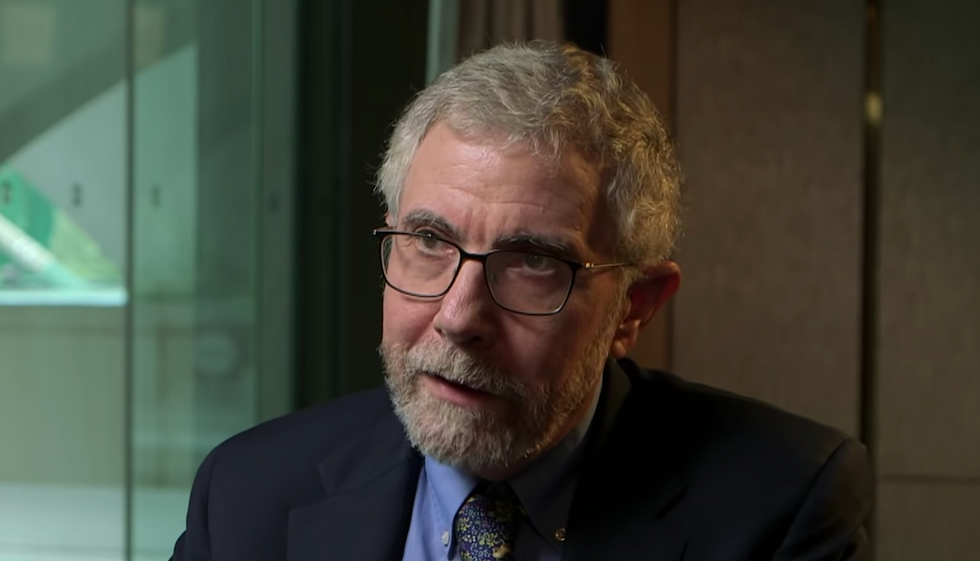 At a press briefing on Monday, May 18, President Donald Trump told reporters that he had been taking daily doses on hydroxychloroquine for “about a week and a half now.” But liberal economist and New York Times columnist Paul Krugman, in a Twitter thread posted the following morning, expresses doubts that Trump was telling the truth.

“Let’s be clear: we don’t know whether Trump is actually taking hydrochloroquine,” Krugman asserts on Twitter. “We only know that he *says* he’s taking it.”

Krugman isn’t the only one to express doubts about whether or not Trump is really taking hydroxychloroquine. Never Trump conservative Joe Scarborough, on his MSNBC program “Morning Joe,” stressed that he doesn’t believe Trump is telling the truth and — like Krugman — slammed him for promoting something that could be dangerous.

Trump has been aggressively pushing hydroxychloroquine as a possible treatment for coronavirus. And Krugman, in his Twitter thread, explains why he believes that Trump would claim to be taking it every day even if he isn’t.

“Why would he say — and possibly, maybe, do — that?,” Krugman writes. “It’s a treatment for his severe case of infallibitis — inability to admit mistakes.”

Let's be clear: we don't know whether Trump is actually taking hydrochloroquine. We only know that he *says* he's t… https://t.co/fliLcjg5cl
— Paul Krugman (@Paul Krugman) 1589889401

Trump is raging at Neil Cavuto for sharing info with viewers that might literally save their lives. It should be th… https://t.co/X3SLGeXNEp
— Greg Sargent (@Greg Sargent) 1589899061

Krugman goes on to say, “By now even Fox News hosts realize that Trump’s initial endorsement of hydrochloroquine — where did that come from, anyway? — was an error that could have lethal consequences. A decent leader wld admit that; even a cynical leader would slink away and pretend it never happened. But Trump can’t help himself.”

The Fox News employee that Krugman was referring to is Neil Cavuto, who Trump has been railing against on Twitter for pointing out that medical experts have been warning against taking hydroxychloroquine. Cavuto emphasized, “It will kill you. I cannot stress enough: it will kill you.”

Krugman wraps up his thread by lamenting that Trump is too “insecure” to acknowledge what doctors have been saying about hydroxychloroquine as a possible way to treat coronavirus.

“He’s so insecure that he has to be right, always, and just doubles down on his disasters,” Krugman tweets. “This is true of everything from health advice to Korean nuclear deals. And it’s going to get a lot of people killed.”

By now even Fox News hosts realize that Trump's initial endorsement of hydrochloroquine — where did that come from,… https://t.co/osO1VgsnDK
— Paul Krugman (@Paul Krugman) 1589889522