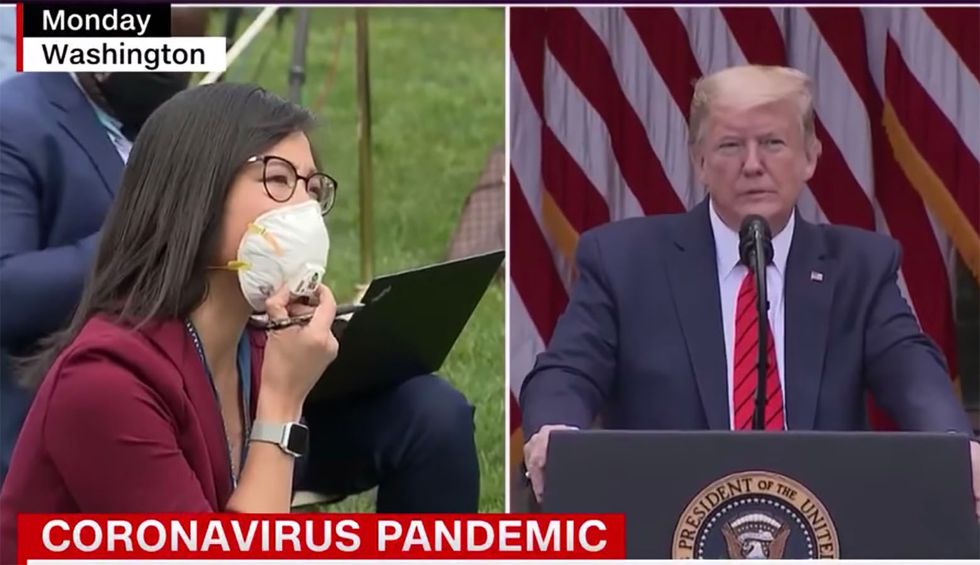 Image via Screengrab.
Tom Boggioni
and
Raw Story
May 12, 2020

During a panel discussion on Donald Trump’s meltdown on two female reporters in the Rose Garden on Monday that culminated with him ending his press conference and stomping off in a huff, CNN’s Alisyn Camerota rand a supercut of clips of the president lashing out at women reporters in particular when put on the spot.

During Monday’s proceedings, the president was pressed by CBS News correspondent Weijia Jiang about what appeared to be a racist retort to her about coronavirus testing in China which then led to a confrontation with Kaitlan Collins of CNN who refused to yield to the president — who then walked out.

According to host Camerota, “What we do know is he has a well-documented history of insulting reporters and of particularly demeaning comments to female reporters. Just to remind our viewers, we have a montage of some of his ugly remarks. so listen to this.”

After rolling the clip of the president bristling and snapping at female reporters of color, CNN’s Abby Phillip added, “It’s part of a pattern and it’s a really clear pattern that been going on for years now. [CNN’s] Kaitlan [Collins] knows it as well. She’s been in those kinds of interactions with the president before. He seems to not be tolerant of taking difficult questions particularly from women.”