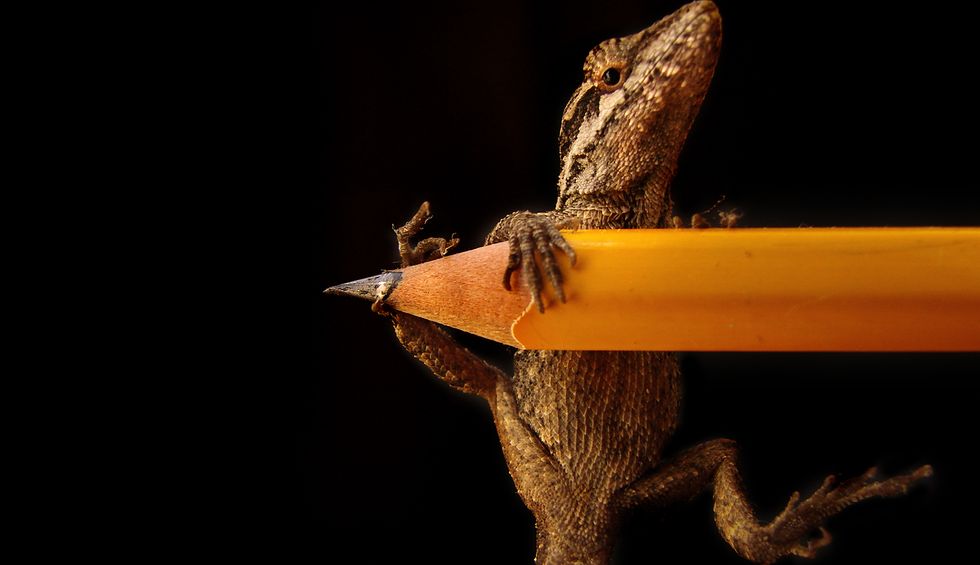 Image via Screengrab.
Matthew Rozsa
and
Salon
May 18, 2020

Every so often an academic article liberates itself from the bonds of turgidity that characterize scholarly prose, and instead welcomes readers with a refreshing gust of literary flair. Such is the case with a recent piece published in Current Directions in Psychological Science, and co-authored by Joseph Cesario and Heather L. Eisthen of Michigan State University and David J. Johnson of the University of Maryland.

The title? "Your Brain Is Not an Onion With a Tiny Reptile Inside."

No, this isn't an article debunking fringe conspiracy theories about how the world's leaders are a bunch of literal lizard people. Rather, it addresses (and debunks) one of the most commonly-used metaphors in evolutionary psychology, the idea that the human brain evolved from lower life forms and hence has evolutionary remnants from those animals — akin to an onion with layers.

If you've ever heard someone speak of you possessing a "lizard brain" or "fish brain" that operates on some subconscious, primal level, you've heard this metaphor in action. This is called the triune-brain theory; as the authors write, the basic crux of it is that "as new vertebrate species arose, evolutionarily newer complex brain structures were laid on top of evolutionarily older simpler structures; that is, that an older core dealing with emotions and instinctive behaviors (the 'reptilian brain' consisting of the basal ganglia and limbic system) lies within a newer brain capable of language, action planning, and so on."

Even respectable science magazines frequently fall back on this metaphor of the triune-brain theory. A Discover article from 2010, titled "You Fall in Love Because Your Brain is a Jellyfish, Lizard, and Mouse Ice Cream Cone," is a prime example of triune-brain theory in action. As writer Kyle Munkittrick wrote then:

Feel that pebble in your shoe? Thank a jellyfish. Ever duck before a rogue Frisbee collides with your noggin? Thank a lizard. Remember where you left your keys? Thank a mouse. Hamilton interviewed David Linden from John Hopkins University who explained that our brain is the way it is because evolution is "the ultimate tinkerer and cheapskate." Evolution built our brain by taking simpler brains and just piling more brains on top - like adding scoops of ice cream to an ice cream cone. Hence, the pieces of our brain inherited from these other creatures are largely unchanged.

The problem, though, is that it just isn't true. Or, as the coauthors of the aforementioned paper put it: "this belief, although widely shared and stated as fact in psychology textbooks, lacks any foundation in evolutionary biology."

As they explain, the triune-brain theory promoted the overly-simplistic idea that animals can be easily organized from "simplest" to "most complex," and implies that evolution "is a linear progression in which one organism became another and then another." The authors explain that "the correct view of evolution is that animals radiated from common ancestors"; another implication of the assumption, "that structural complexity endows functional complexity," is in fact still up for debate.

"Perhaps mistaken ideas about brain evolution persist because they fit with the human experience: We do sometimes feel overwhelmed with uncontrollable emotions and even use animalistic terms to describe these states," the authors conclude. "These ideas are also consistent with such traditional views of human nature as rationality battling emotion, the tripartite Platonic soul, Freudian psychodynamics, and religious approaches to humanity. They are also simple ideas that can be distilled to a single paragraph in an introductory textbook as a nod to biological roots of human behavior. Nevertheless, they lack any foundation in our understanding of neurobiology or evolution and should be abandoned by psychological scientists."

It is worth noting that the "lizard brain" metaphor appears often in science journalism as well. Last month Elon Musk discussed how he believes the lower brain is the "boss" and issues directives to the upper brain during an YouTube interview on a MIT Lex Friedman podcast episode. In March, Mike Lofgren of BillMoyers.com used the analogy to explain why conservatives tend to be more motivated by fear than liberals, arguing that "MRI tests have shown that different centers of the brain light up more robustly in these persons than others, and their amygdala – the so-called 'lizard brain' that controls the threat response – is larger than average. To what extent this characteristic is an inherited tendency and to what extent socialization alters the highly adaptable components of the brain is debatable." (Not to say that Musk and Lofgren were wrong about the larger points they were trying to make, merely that they used a misleading scientific analogy to express it.)

Unfortunately, the triune-brain theory remains a staple of introductory science textbooks. The study's coauthors sampled 20 introductory psychology textbooks, published from 2009 and 2017. "Of the 14 [textbooks] that mention brain evolution, 86% contained at least one inaccuracy along the lines described above," they said. "Said differently, only 2 of the field's current introductory textbooks describe brain evolution in a way that represents the consensus shared among comparative neurobiologists."

That means if you're clinging to a neurobiological misconception and feeling angry about it, you can no longer blame your lizard brain for those strong emotions. You have only your own human brain to blame.
Report typos and corrections to: feedback@alternet.org.