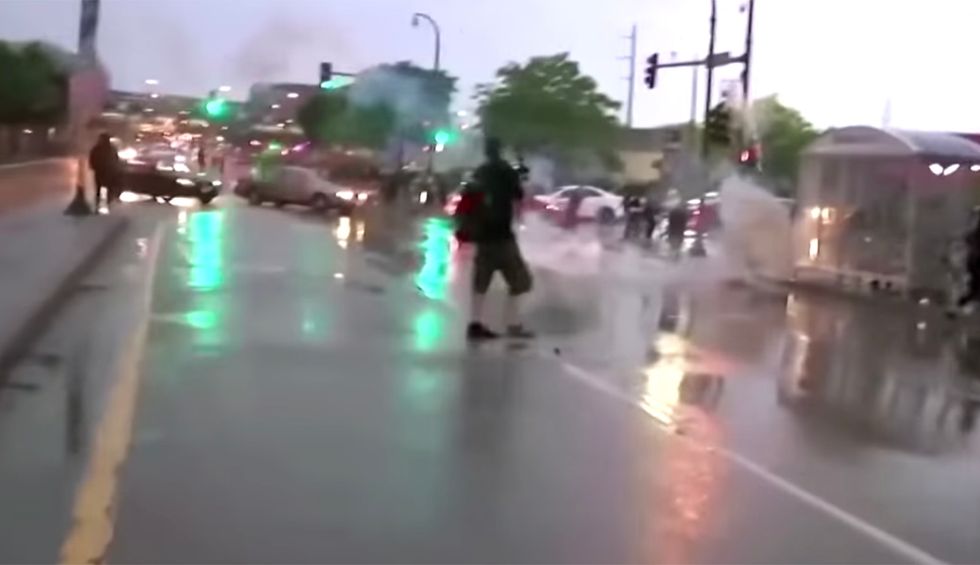 Image via Screengrab.
Marissa Higgins
and
Daily Kos
May 27, 2020

On Tuesday night in Minneapolis, Minnesota, protesters gathered at the intersection where George Floyd, a 46-year-old Black man, was handcuffed and pinned to the ground for an estimated eight minutes by a white police officer. In a video that has since gone viral, Floyd can be heard saying: “I can’t breathe! Please, the knee on my neck.” Bystanders for the incident also called on the officer to let up; however, the officer doesn’t appear to stop until paramedics arrive with a stretcher, at which point Floyd is seemingly unresponsive. Floyd died hours later. Since then, the four officers involved have been fired, but protesters want further action: namely, charges and a conviction.

Peaceful protesters originally chanted phrases like, “I can’t breathe!” and “It could’ve been me!” It’s estimated that hundreds of people gathered. In speaking to The Washington Post, Anita Murray, who was one of the protestors, noted: "It's scary to come down here in the middle of the pandemic, but how could I stay away?"

Then organizers marched to the precinct where it’s believed the officers involved worked. The Wall Street Journal reports that some of the protesters damaged windows and sprayed graffiti. Police in riot gear responded by firing tear gas and projectiles, as reported by the Associated Press.

“I got on my knees and I put up a peace sign and they tear gassed me,” one protester said as reported by local outlet WCCO.

In a statement, Mayor Jacob Frey said firing the officers involved was the “right call,” and stressed that “being black in America should not be a death sentence.” As of Tuesday, the FBI is reportedly launching an investigation, as is the Minnesota Bureau of Criminal Apprehension. Minnesota Senator and former presidential hopeful Amy Klobuchar has also called for an investigation.

Floyd was a father and a security guard at a local restaurant. In an interview with the Post, Jovanni Thunstrom, owner of the restaurant where Floyd reportedly worked, described him as a great person who helped those in need. He told the Post that officers “are supposed to serve and protect, but Floyd didn’t get either. He didn’t get served or protected. He got choked.”

Given the recent coverage of anti-lockdown protests, like at the Michigan state capitol, many people are drawing comparisons between the way protesters are treated by both the police and the media.

So these guys can protest with guns and yell in the face of a police officer to open up hair salon get their hair d… https://t.co/rwiU7QLjpt
— honeylove (@honeylove)1590573351.0

Do we save tear gas and riot gear for unarmed people? Reason I ask is because it was totally cool a few weeks ago… https://t.co/iUxzHeBktV
— Randy Bryce (@Randy Bryce)1590587156.0

Many progressives are calling for justice and large-scale reform.

Shooting rubber bullets and tear gas at unarmed protesters when there are children present should never be tolerate… https://t.co/EDU46pdT7C
— Ilhan Omar (@Ilhan Omar)1590552760.0

The rightful firing of these officers for their horrendous actions in Minneapolis must be the beginning, not the en… https://t.co/DVKXoe0iAd
— Rep. Nadler (@Rep. Nadler)1590529670.0

We are fed up with Black lives being taken. Officers must be held accountable for the excessive use of force that t… https://t.co/G86cKmnbqj
— Kamala Harris (@Kamala Harris)1590511952.0