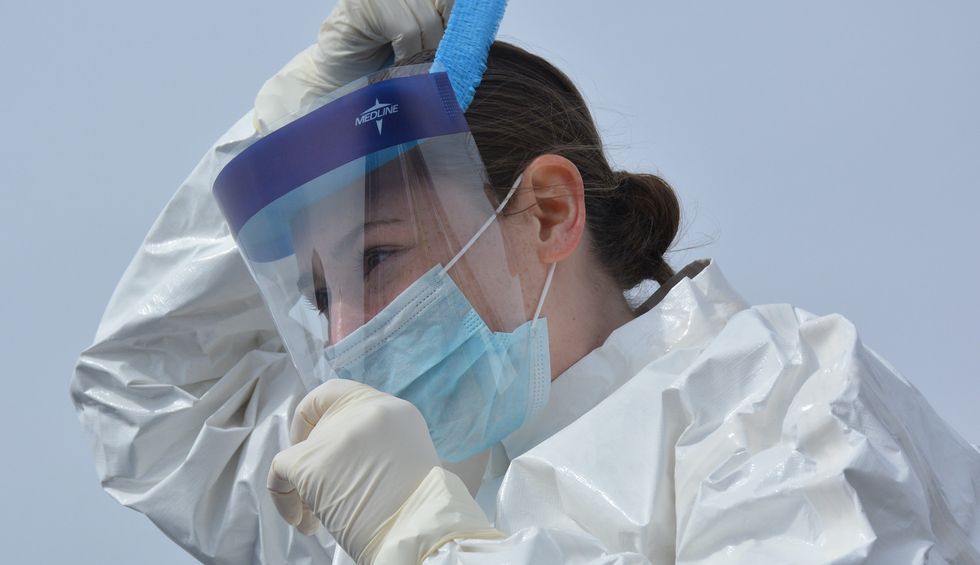 A Pennsylvania National Guard Soldier straps a shield over her face before the start of COVID-19 testing practice at Mohegan Sun Arena in Wilkes-Barre, Pa., on April 19, 2020. The practice consisted of walk-throughs of the operation of the lanes that would be run by teams from the Pa. National Guard, Pennsylvania Department of Health and Pennsylvania Emergency Management Agency (U.S. Army photo by Sgt. 1st Class Matthew Keeler).
Alex Henderson
May 11, 2020 Personal Health

Many of the symptoms of coronavirus have been widely reported in the mainstream media: severe coughing, a high fever, extreme fatigue, difficulty breathing. But doctors and scientists will be the first to say that because COVID-19 is a new disease, they still have a lot to learn about it. And in an article for the Washington Post, reporters Lenny Bernstein and Ariana Eunjung Cha discuss some of the things doctors are learning about COVID-19 as they continue to study and analyze the disease.

Angela Rasmussen, a virologist at Columbia University’s Mailman School of Public Health, told the Post, “Bottom line: this is just so new that there’s a lot we don’t know.” And David Reich of Mt. Sinai Hospital in New York City explained, “No one was expecting a disease that would not fit the pattern of pneumonia and respiratory illness.”

One of the things doctors are learning about COVID-19, Bernstein and Cha note, is that respiratory problems are only the tip of the iceberg when it comes to the damage it can inflict.

“It attacks the heart, weakening its muscles and disrupting its critical rhythm,” according to Bernstein and Cha. “It savages kidneys so badly some hospitals have run short of dialysis equipment. It crawls along the nervous system, destroying taste and smell and occasionally reaching the brain. It creates blood clots that can kill with sudden efficiency and inflames blood vessels throughout the body.”

COVID-19’s brutal impact on older people has been widely reported, but Bernstein and Cha point out that more is being learned about the harm it can inflict on younger patients.

“It mostly spares the young — until it doesn’t,” the Post reporters write. “Last week, doctors warned of a rare inflammatory reaction with cardiac complications among children that may be connected to the virus. On Friday, New York Gov. Andrew M. Cuomo (D) announced 73 children had fallen severely ill in the state, and a 5-year-old boy in New York City had become the first child to die of the syndrome. Two more children had succumbed, as of Saturday.”

Bernstein and Cha describe COVID-19 as “the bad seed of the coronavirus family,” observing that it “has managed to combine the infectiousness of its cold-causing cousins with some of the lethality of SARS and MERS. It can spread before people show symptoms of disease, making it difficult to control — especially without widespread and accurate testing. At the moment, social distancing is the only effective countermeasure.”

Geoffrey Barnes, who specializes in cardiovascular medicine and is an assistant professor at the University of Michigan, stresses that when a disease isn’t even half a year old, a lot more research is going to be needed.

“This is a virus that literally did not exist in humans six months ago,” Barnes told the Post. “We had to rapidly learn how this virus impacts the human body and identify ways to treat it literally in a time-scale of weeks. With many other diseases, we have had decades.”