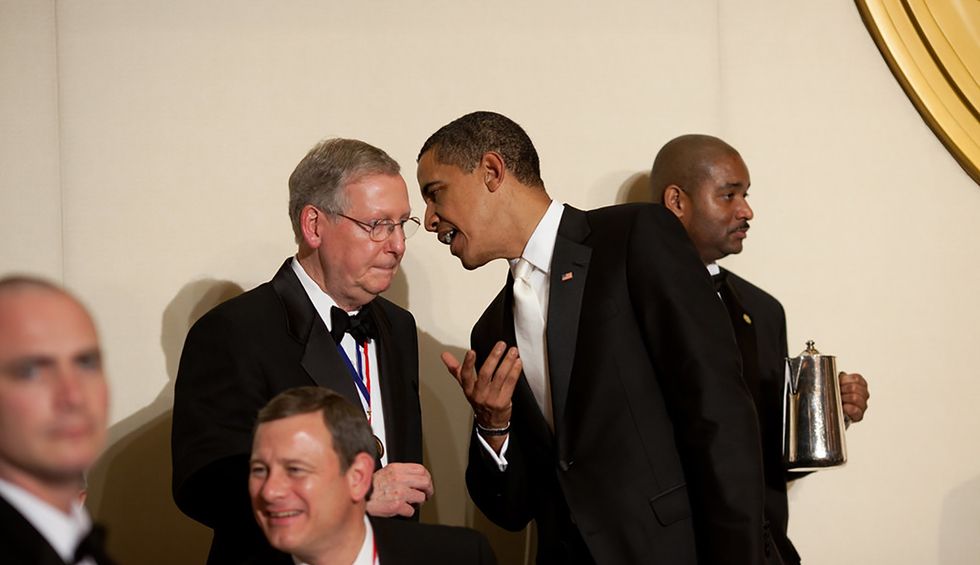 "I think President Obama should have kept his mouth shut," McConnell told Trump's daughter-in-law Lara Trump in an interview broadcast by the president's re-election campaign.

"I think it's a little bit classless, frankly, to critique an administration that comes after you," he said. "You had your shot. You were there for eight years. I think the tradition that the Bushes set up of not critiquing the president who comes after you is a good tradition."

An Associated Press fact-check debunked McConnell's claim, noting that Bush did criticize Obama in 2015. Past presidents such as Bill Clinton, Jimmy Carter and Theodore Roosevelt have also criticized their successors.

"Some terrible things happened . . . and you'll be seeing over the coming weeks," Trump told reporters Monday, though he was unable to name a single believed Obama had done wrong.

It was far from the first time that Trump had attacked his predecessor. He has repeatedly baselessly accused Obama of "wiretapping" his campaign and blamed his predecessor for his administration's botched coronavirus testing rollout, even though neither the new coronavirus nor tests for it even existed when Obama was in office.

McConnell's comments drew criticism after he apparently had no reservations about Trump's attacks on the institution.

"So Mitch McConnell thinks that Obama should keep his mouth shut, but he says nothing about the stream of Trump's inane and hateful remarks during a pandemic?" Mother Jones editor David Corn tweeted. "[McConnell] just put his own cowardice & hypocrisy on full display."

Obama's criticisms were far tamer in comparison and was made in a private discussion with former administration aides, which was later leaked to Yahoo News.

"This election that's coming up on every level is so important, because what we're going to be battling is not just a particular individual or a political party. What we're fighting against is these long-term trends, in which being selfish, being tribal, being divided and seeing others as an enemy — that has become a stronger impulse in American life," Obama said in the audio clip. "And by the way, we're seeing that internationally, as well. It's part of the reason why the response to this global crisis has been so anemic and spotty. It would have been bad even with the best of governments. It has been an absolute chaotic disaster when that mindset — of 'what's in it for me' and 'to heck with everybody else' — when that mindset is operationalized in our government."

Obama also criticized the intervention in Flynn's case, raising concerns that the move had undermined "our basic understanding of rule of law."

McConnell in Monday's interview falsely claimed that it was somehow Obama's fault that the Trump administration had botched its response to the pandemic.

McConnell's claim came after Politico reported that the Obama administration, in fact, left Trump a 69-page document literally called the "National Security Council playbook on fighting pandemics." Trump's team not only ignored the playbook but also ignored numerous early warnings about the threat posed by the virus and disbanded a White House pandemic team which was created under Obama, according to the report.

"Maybe McConnell should decide that there's a new tradition: It's now classless for a president to hand over to his successor detailed plans to handle disasters, because if the successor is incompetent enough to ignore them, he'll look bad," New York Magazine's Jonathan Chait wrote.

Some critics noted that McConnell was among the least popular senators in the country.