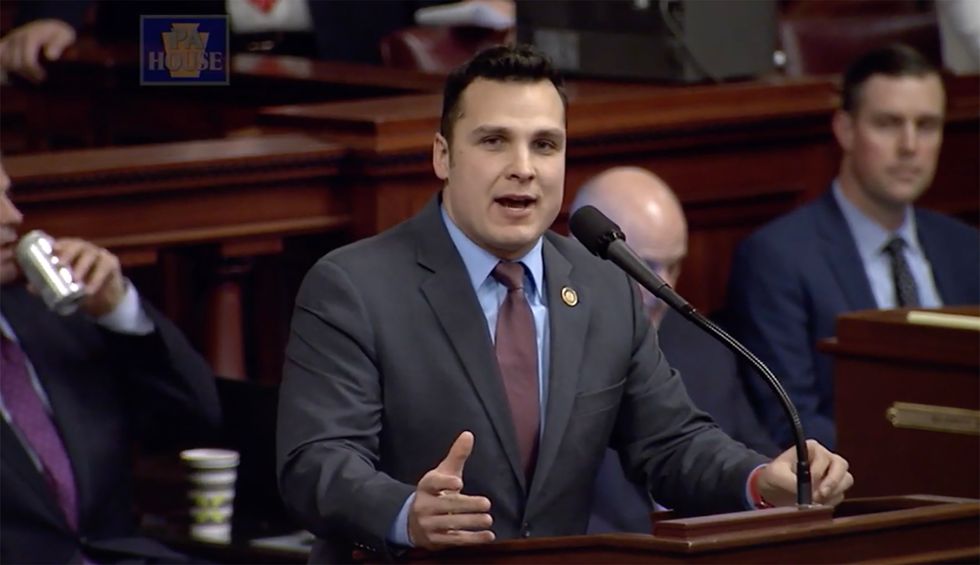 Image via Screengrab.
Walter Einenkel
and
Daily Kos
May 28, 2020

Republican state Rep. Andrew Lewis of Pennsylvania announced on Wednesday, May 27, that he had been secretly self-quarantining for a few days before testing positive for COVID-19, saying that his last day at the state Capitol was May 14. Lewis says he felt ill for a few days before being tested for the virus on May 18, and told he was positive for the virus on May 20. According to Lewis he kept his case quiet “Out of respect for my family, and those who I may have exposed.” Whatever that means. State Rep. Lewis clarified in the comments that he did privately inform family and people who might have been exposed, and said members of his staff “who met the criteria exposure was immediately contacted and required to self-isolate for 14 days from their date of possible exposure.”

However, while Lewis writes that he contacted the “House of Representatives, and our caucus Human Resources department,” according to many Democratic state representatives this is the first they are hearing about it. According to reporters from Spotlight PA and The Philadelphia Inquirer, Democratic reps only became aware that there may be COVID-19 spread in the state capitol one day ago.

Lewis’ announcement comes coincidentally at the same time that Republican State Rep. Russ Diamond, announced that he has been self-quarantining since May 21—after being informed by House human resources officials that he may have come into contact with someone carrying the virus. Ironically enough, Diamond’s last day at the state Capitol on May 21, included him arguing to end Gov. Tom Wolf’s emergency declaration due to the continued crisis of the pandemic. But more importantly, Democratic State Reps. like Kevin Boyle, who sits on a committee with both Lewis and Diamond, wanted to know why he wasn’t informed earlier that one of these two selfish legislators had tested positive for the virus.

“If it was known yesterday that members were either positive or in quarantine, we needed to know that yesterday. We absolutely need to know more. There needs to be transparency about this. These members are pushing us to reopen the state. The hypocrisy is astounding.”

It’s hard to overstate the levels of hypocrisy the Republican Party have been able to reach, day in and day out, for decades now.