Kent State massacre: The roots of today's polarization were planted 50 years ago. So were the destructive neoliberal policies that followed 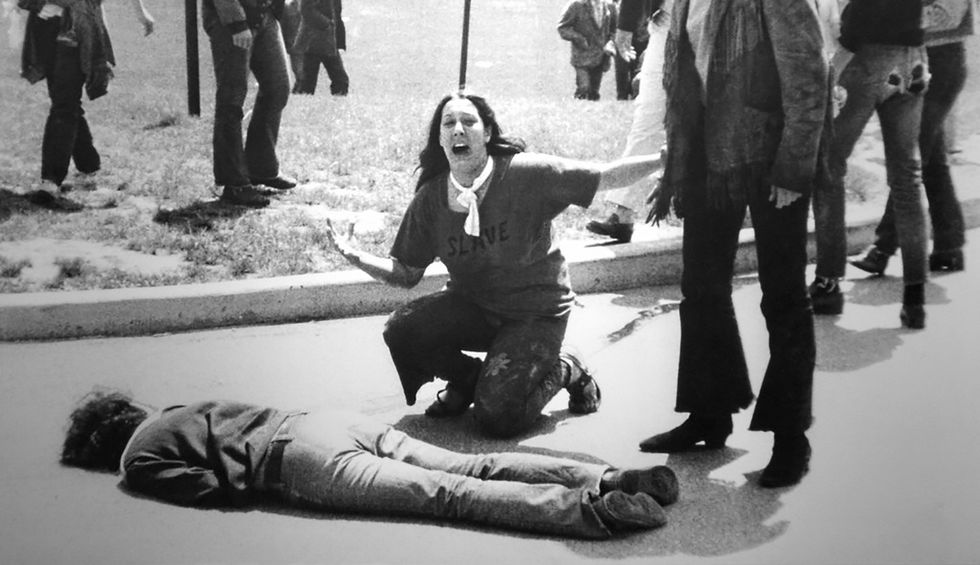 1971 Pulitzer Prize, Spot News Photography, John Paul Filo, Valley Daily News and Daily Dispatch. Spring 1970, Student activists tear up campuses across America. Things are quiet at Ohio's Kent State University — until police break up a rowdy beer bash. Twenty-four hours later, 800 students demonstrate on the university commons. Someone throws a lighted railroad flare into the ROTC building. Firefighters arrive. Students hurl rocks and cut hoses. The building burns to the ground. When photojournalism student John Filo shows up for classes on Monday morning, there are 500 National Guard troops on campus. Disappointed that he missed the weekend action, Filo grabs his camera and heads for a student demonstration scheduled on the commons. The campus bell rings. The rally begins. Soon. National Guardsmen appear and order the demonstrators to disperse. Students shout "Pigs off campus!"' They throw rocks. The Guardsmen form two lines and tire tear gas canisters into the crowd. The students throw more rocks. The Guardsmen retreat up a hill. At the top. the troopers suddenly kneel, aim and fire. Filo thinks they are shooting blanks. Then he sees a bullet hit a metal sculpture and smack into a tree. Around him. students fall to the pound. A boy lies in a puddle of blood. "A girl came up and knelt over the body and let out a God-awful scream. That made me click the camera." Thirteen students are injured. Four die. Eight troopers are eventually indicted in the killings. No one is ever convicted.
Ted Morgan
and
Salon
May 04, 2020

For some of us, the killing of four students at Kent State on Monday, May 4, 1970, is a moment we will never forget.  It was certainly one of the iconic moments of 1960s-era protests, immortalized in Neil Young's "Ohio," with its refrain, "four dead in Ohio."

Students on campuses across the nation erupted in furious, and occasionally violent protest after President Nixon announced on April 30 that American forces in Vietnam had invaded neutral Cambodia. In effect, Nixon acknowledged that he had previously lied to the public.  Students on the fairly conservative Kent State campus began protesting peacefully on May 1, but later that night young people frequenting the town's bars began to disrupt traffic and eventually, amidst a police crackdown, smashed store windows. Tensions grew the next day, and that night the ROTC building on campus was burned. Police and National Guard troops drove students into their dorms.

Tensions escalated on May 3 with armed National Guard troops occupying the campus and Ohio governor James Rhodes declaring the students were "worse than the Brown Shirt and communist elements." That evening students gathered to protest the Guard's presence on campus, a rally broken up by tear gas.

Despite the presence of armed Guardsmen throughout the campus, about 2,000 students gathered for a previously-scheduled rally at noon on May 4, and their numbers grew when nearby classes ended. Although ordered to disperse, and later tear gassed, most students, believing their campus had been invaded, remained. With fixed bayonets and loaded rifles, the Guard advanced on the students, launching more tear gas. Many students retreated, and a standoff resulted, with in most cases about a hundred yards apart separating the two; Guardsmen launched tear gas canisters at the students who, in turn, reviled the Guard with abusive language, while some threw rocks. Few if any imagined the Guards' rifles were locked and loaded, as they were.

Within 30 minutes of the noontime start, a line of Guardsmen suddenly turned to face the students, dropped to their knees, and opened fire. Four students were killed, only two of whom were protesting, and nine were wounded, one permanently paralyzed. Most of those hit were a hundred yards or more from the soldiers.

News reports and John Filo's iconic photograph brought the shocking news to a stunned nation.  In typical fashion the Nixon White House issued a statement blaming the students, claiming "when dissent turns to violence, it invites tragedy," and Vice President Spiro Agnew denounced the "psychotic and criminal elements in our society." Well over a thousand campuses exploded in student protest, leading to a student strike and 536 campuses shutting down completely, 51 for the remainder of the school year. Ten days after the Kent State shootings, two black students at Jackson State College in Mississippi were killed and 12 were wounded when police opened fire on a women's dormitory during protests against the Cambodian invasion. The Jackson State killings received far less media coverage.

Other Americans echoed the rhetoric of politicians like Agnew and Governor Rhodes, nowhere more than in Kent, Ohio. For weeks, the local paper printed a full page of letters revealing sentiments like "Live ammunition!  Well, really, what did they expect, spitballs?"  "Hooray!  I shout for God and Country … America, support it, or leave it." A prominent local attorney noted that if he were faced with the situation and had a submachine gun, "there probably would have been 140 of them dead, and that's what they need." One non-protesting student returned home to hear her mother pronounce ""It would have been better for America if every student on that hill had been killed." "Mother!" she replied, "I was there. Only a miracle of some kind saved me.  What about that?" To which her mother responded, "You would have deserved it."

After its thorough investigation of the Kent State history, the President's Commission on Campus Unrest observed that, regardless of "intolerable" acts of student violence over the weekend, the "indiscriminate firing of rifles into a crowd of students and the deaths that followed were unnecessary, unwarranted, and inexcusable." More generally, the Commission declared,

The crisis on American campuses has no parallel in the history of the nation.  This crisis has roots in divisions of American society as deep as any since the Civil War.  The divisions are reflected in violent acts and harsh rhetoric, and in the enmity of those Americans who see themselves as occupying enemy camps.

That last line may sound familiar to contemporary readers, even if the events of 50 or more years ago don't. It's hard to convey to younger Americans the daily horror that was the American war in Vietnam. Antiwar protest first erupted in the wake of Lyndon Johnson's 1965 escalation of the war, and expanded enormously in subsequent years, spreading across the nation, with increasingly confrontational, and in some cases violent, tactics. By 1970, a majority of Americans opposed the war, and a year later a majority felt the war was "immoral"  — a percentage that would rise significantly in later years.

Indeed, the roots of today's polarization reside in what happened in the 1960s era. Careful scrutiny of media and movement accounts reveals a telling pattern — from civil rights to black power, free speech to campus liberation, as well as the antiwar and women's liberation movements. Each movement in its own way reflected underlying democratic urges — the empowerment of people fundamentally marginalized in American society, the quest for respect for one's personhood, the desire for an American foreign policy that respected the self-determination of other peoples, etc. At some level, all fundamentally posed a challenge to existing American institutions.

It was to this latter, more radical aspect that the mass media were stone deaf. Media discourse ranged between liberal and conservative insiders telling us what the protests meant. The media routinely viewed protests with suspicion, often belittling if not outright condemning them; images of the most flamboyant behaviors — often the more violent or bizarre actions of a few — were highlighted; and politicians from Presidents on down were quick to accuse the protesters of the worst intentions, often equating the wider protest movement with the most disruptive actions of a few. Indeed, if the only way to express "radical" was to be militant, media coverage began to invite "expressive politics" — as it continues to do — a politics that can only attract or repel, but can't really dialogue with those of different perspectives.

Millions of Americans did find those images threatening and/or distasteful, especially when they were told by politicians what "those people" meant. It's hardly surprising to find the gulf between Americans as wide as it was in the aftermath of Kent State.

But there's more to this story.  By demanding the inclusion of vast numbers of previously marginalized Americans — particularly racial minorities, women, and young people — in the American political economy, the '60s era threatened the political and economic status quo. And political and economic elites responded in kind, especially as economic profitability declined in the 1970s. Vast amounts of corporate and foundation monies launched an information counteroffensive that, along with a right wing media onslaught, is still with us today. Capitalism was revived in a new neoliberal form, serving the interests of the 1%. Ronald Reagan became the perfect spokesperson of the new regime because he voiced conservative values and denounced the '60s while simultaneously turning American politics over to the market place and hence the wealthy.

The thread that runs through the political success of neoliberalism is just that: enact policies that favor the wealthy, but use language that feeds on the very kind of resentments that were fed in the '60s era. Neoliberal policies continue to marginalize the very people who felt left out or alienated by the '60s era — as well as their offspring — but it at least makes them feel they are being heard, that the oligarchs are on their side. Enter Donald Trump, and where we are today.

It remains to be seen if people can come together in the wake of the coronavirus to forge a new way forward.  But the need to do so is imperative.