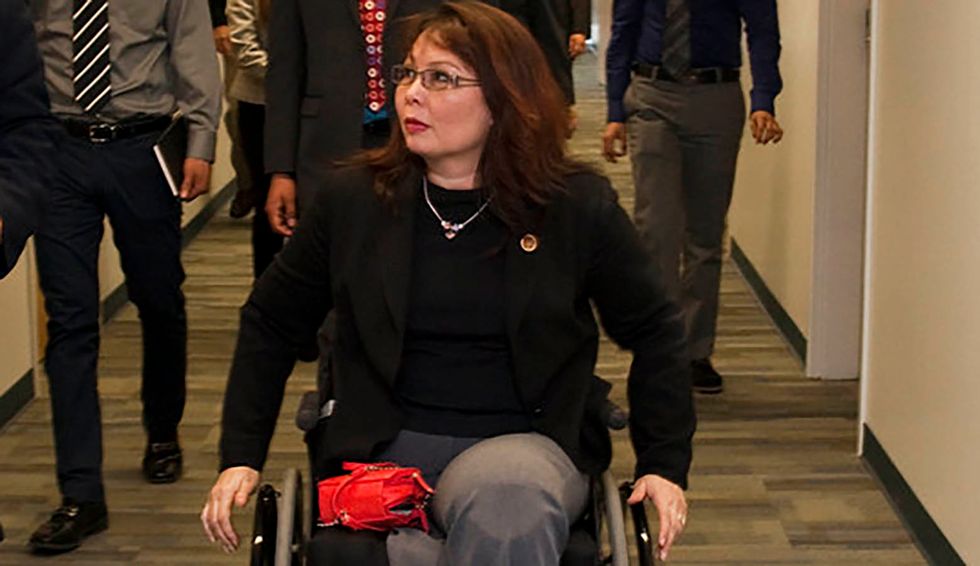 Back in January and February — when he was still insisting that coronavirus didn’t pose a major threat to the United States — President Donald Trump praised the government of Mainland China for its coronavirus response. Trump, however, has since flip-flopped and is now blaming Chinese authorities for the spread of COVID-19. Criticizing that authoritarian government is one thing, but Trump’s recent rhetoric has an ugly anti-Asian tone — and former Vice President Joe Biden (the presumptive Democratic presidential nominee) and Sen. Tammy Duckworth of Illinois call him out for it in a blistering op-ed for NBC News’ website, emphasizing that he is promoting racism against Asian-Americans.

“In the past several months,” Biden and Duckworth explain, “countless Asian-Americans have been punched and kicked and threatened, told that they’ll be sorry if they don’t leave this country — their country. They’ve been blamed for COVID-19: yelled at by strangers in parking lots, refused service at stores and needlessly, cruelly scapegoated by the most powerful man on the planet, President Donald Trump, who has racialized the pandemic and stoked xenophobia every time he’s uttered the term ‘Chinese virus.’”

Trump’s critics — from liberals and progressives to Never Trump conservatives — have been stressing that thousands of lives could have been saved in the United States if Trump had taken the threat of coronavirus seriously back in January and February. And according to Biden and Duckworth, anti-Asian rhetoric is deflection on Trump’s part.

“Deflecting blame for his own failure to heed the warnings of experts to prepare for this crisis, Trump has stood in the White House briefing room day after day and pulled from the same cynical playbook he’s relied on so many times before — stoking grievances and using the same politics of division that helped him get elected in the first place, this time by casting Asian-Americans as the ‘other,’” the Democrats write. “As if they are a deviation from those who are ‘actually’ American. As if they don’t truly belong.”

Biden and Duckworth note that at one of his White House press conferences, Trump told an Asian-American reporter to “ask China.” And that is the type of bigotry, Biden and Duckworth point out, that “led to Japanese- Americans being interned on U.S. soil even as their loved ones fought to defend this nation overseas during World War II.”

Certainly, criticizing the authoritarian government in Mainland China over its initial response to coronavirus is not racist — plenty of Americans, both left and right, have done that and asserted that the treatment of the late Dr. Li Wenliang by Chinese authorities was appalling. Wenliang (who died of coronavirus) valiantly warned that COVID-19 had the makings of a global pandemic, and he was abused by Wuhan police for it.

But Trump wasn’t calling out Chinese government officials in January or February; he was still praising them at that point. And when Trump resorts to xenophobic anti-Asian rhetoric now, it is a cynical and shameless political ploy.

Biden and Duckworth conclude their op-ed by stressing that during the month of May — which is Asian-American and Pacific Islander Heritage Month  — the contributions of Asian-Americans should be honored.

“As our neighbors are spit on and beat up because of the color of their skin,” the Democrats asserts, “it is more obvious than ever how important it is that we make this the last Asian-American and Pacific Islander Heritage Month with Trump in the White House.”