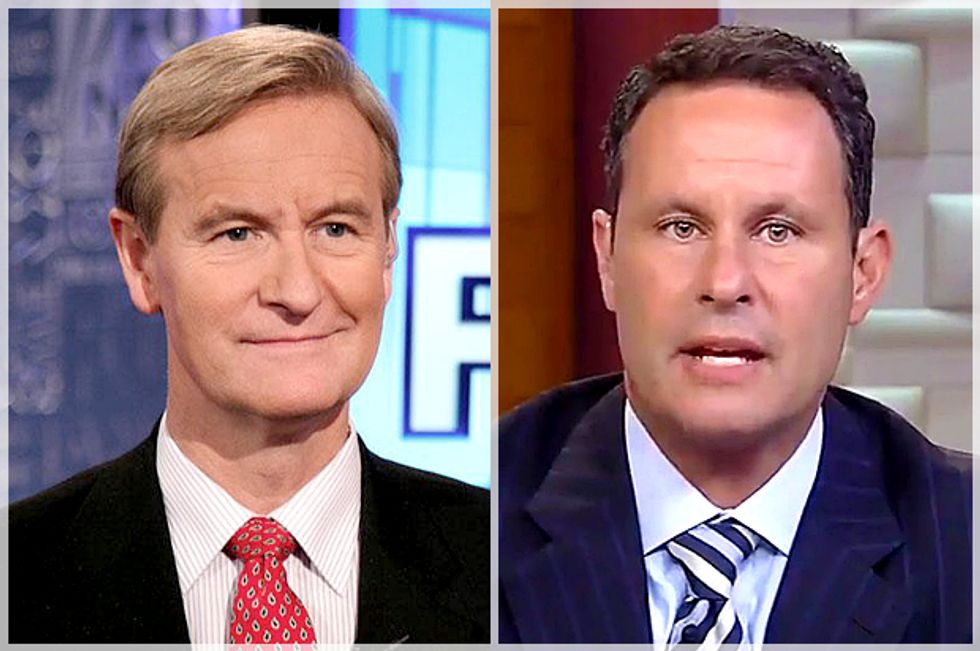 Although President Donald Trump has used Twitter incessantly to promote himself, he has been furious with the social media outlet this week for fact-checking two of his tweets — so furious that on Thursday, he issued an executive order targeting social media companies and claimed that he did so to “defend free speech.” Twitter hasn’t removed any of Trump’s tweets, but flagged or hidden them as inaccurate or violent. While legal scholars have been asserting that the order cannot withstand legal scrutiny, Media Matters’ Matt Gertz stresses that it serves a useful purpose for Trump nonetheless — and that purpose has been identified by the “notoriously stupid” Fox News host Steve Doocy.

“President Donald Trump capped off a multi-day tantrum at Twitter for appending a mild fact-check to one of his false tweets by retaliating with the power of the federal government,” Gertz explains. “The executive order he signed Thursday is slapdash and incoherent, rooted in a false premise, hypocritical and potentially unconstitutional, legally unenforceable yet dangerously authoritarian, with sections that read like a Fox News screed. But to analyze the executive order’s flaws is to miss the point entirely.”

That purpose, according to Gertz, is “raising the cost of defiance until his perceived enemies break” — and the executive order “forces Twitter to expend resources fighting it, but if the company bends to Trump and does what he wants, maybe it will just go away.”

“Steve Doocy of all people — the notoriously stupid ‘Fox & Friends’ host who is one of the president’s favorite cable news personalities — (inadvertently) nailed it on Wednesday,” Gertz notes. “Social media companies would face ‘a big headache’ if Trump tried to repeal the section of federal law that the executive order targets, he exclaimed, so ‘they might think twice about putting a footnote on a tweet from the president of the United States.’”

Gertz emphasizes that with his executive order, Trump is “drawing a line between companies that defy him and are punished and those that work to benefit him and receive praise.” Trump, Gertz observes, “lauded Facebook CEO Mark Zuckerberg for criticizing Twitter’s decision to fact-check him.”

“Zuckerberg is the poster child for what Trump wants from the head of a social media company,” according to Gertz. “The Republican political operatives he hired to run Facebook’s policy wing have carved out exemptions from the site’s rules for Trump and his media allies. Trump is making clear that it is in the interests of other social media platforms like Twitter and YouTube to adopt that same corporate strategy — and he will continue to raise the temperature until they do.”