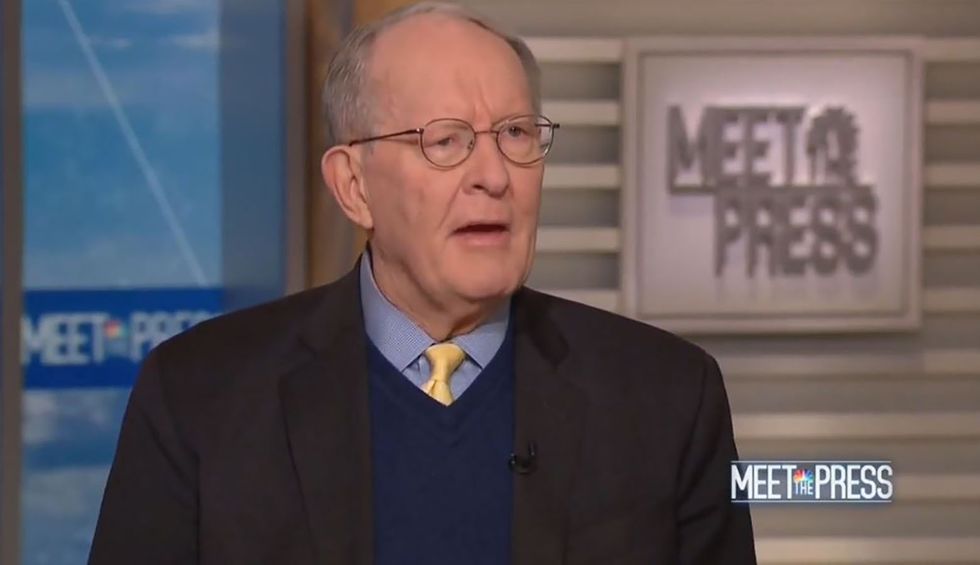 Image via Meet the Press .
Jake Johnson
and
Common Dreams
May 11, 2020 The Right Wing

A top Republican senator who had no qualms with voting for a $1.5 trillion tax cut for the rich or a multi-trillion-dollar corporate slush fund said Sunday that, as millions of people across the U.S. struggle to afford basic necessities, there is "not enough money" to provide relief to everyone harmed by the coronavirus pandemic.

"There's not enough money to help everybody hurt when you shut down the government," Alexander, a Tennessee Republican and chairman of the Senate Health, Education, Labor and Pensions Committee, said in an appearance on NBC's "Meet the Press."

"We have to reopen the economy, we have to do it carefully, we have to let people go back to work and earn a living," said Alexander. "And I don't see us being able to appropriate much more money to help provide a counter to that."

Progressive groups and economists reacted with outrage to Alexander's remarks, which came amid ongoing debates over the next coronavirus stimulus package as the relief provided by previous measures—such as expanded unemployment insurance and one-time stimulus payments—proves inadequate to match the scale of the crisis.

Stephanie Kelton, professor of economics at Stony Brook University, tweeted Sunday that she "can't believe we're hearing, 'We're out of money' in the early stages of a crisis. AGAIN."

"The truth is, Congress can appropriate whatever it chooses," Kelton said. "It literally cannot run out of money."

The Working Families Party said that Republicans "took care of their billionaire buddies and Wall Street bankers," and "now they're trying to say there's 'not enough' left to help you and your family."

Larry Kudlow, President Donald Trump's top economic adviser, said Friday that formal negotiations with Congress over the next Covid-19 stimulus package have been suspended—even as other White House officials predict the U.S. unemployment rate could surpass 20% by next month. Under the CARES Act, which Trump signed into law in March, expanded unemployment benefits are set to expire by July 31 without additional action from Congress.

As the Trump administration and Senate Republicans stall on additional relief, claiming to be concerned about the rising national debt, House Democrats are in the process of crafting their own stimulus legislation that could be unveiled as early as this week.

The package, according to Axios, is expected to include an increase in federal nutrition assistance and Medicaid funding, expanded unemployment benefits, and another round of direct stimulus payments.