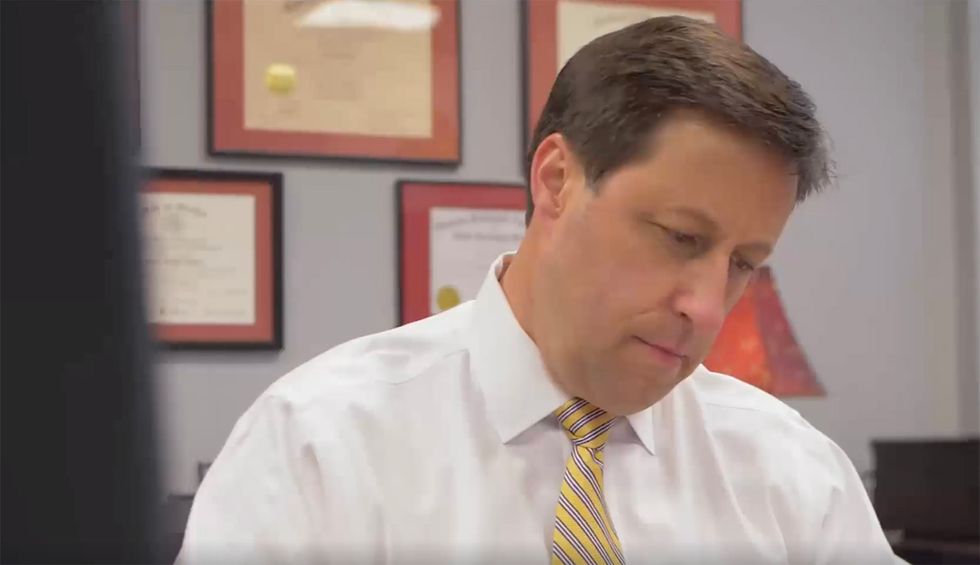 Image via Screengrab.
Jessica Sutherland
and
Daily Kos
May 24, 2020

“Dear @potterybarn (and other retailers),” the proud forced-birther with an “A” NRA rating wrote, in a tweet that’s been deleted (cached here) in the time since I started writing this story. “ I am NOT shopping by appointment. You're allowed to be open, so be open. And why close at 5 when mall is open until 7? Do you actually want to sell anything?” Based on the time stamp of the tweet, Stone had gotten to the mass home goods retailer within minutes of its closing.

It’s unclear what the failed Republican candidate for lieutenant governor, who has been using the platform to complain about the Tar Heel State’s COVID-19 restrictions under Democratic Gov. Roy Cooper, expected to happen. Did he expect employees to be ordered to open by the corporate social media team while he was in line at Orange Julius? Did he expect free coupons to help dull the pain of not being permitted to touch $200+ faux-alpaca throw blankets with his own two hands? Did he expect commiseration from fellow Reopen! protesters who also were denied the joy of running an ungloved finger along the faux-distressed frames of a Statement Mirror?

Whatever Stone, a huge fan of voter ID, may have expected, what he got was so much better.

First, the tweet itself! You’ll note that Stone originally was self-aware enough to applaud the geniuses whose creative labor amused him, even as he lectured those who “took it in a partisan direction.”

This one made a play on one of the Branch Covidians’ favorite sign slogans!

It’s all about perspective, y’all.

Hard-pressed to think of a more perfect definition of “snowflake” than “grown man who gets upset when a global pand… https://t.co/SZxSJx4xUe
— Farmer Jones (@Farmer Jones)1590269278.0

Many praised Pottery Barn for protecting its staff.

Speaking as a frontline worker: Smart companies are not endangering the health and safety of their staff, just beca… https://t.co/ckJq3uCRZX
— кεℓℓү (@кεℓℓү)1590263629.0

Stone has a pretty vague platform on his website (along with an embedded Twitter feed), but there’s no question of his unwavering support of law enforcement—except for those “Sanctuary Sheriffs” who won’t help ICE, of course. Anyway, this tweet feels aligned with Stone’s alignment.

Considering North Carolina’s history with protecting businesses’ right to inflict discrimination upon the LGBTQ+ community, this is particularly biting.

Just to be clear: Bakers don’t have to make cakes for gays, but Pottery Barn must stay open whether it wants to or… https://t.co/ja3mXMifyT
— Jeff Sharlet (@Jeff Sharlet)1590274654.0

Stone’s vague stances are definitely pro-business, and anti-regulation, so this is a great point.

“Nanny Stone” does have a certain ring to it.

I’m old enough to remember when Republicans said they believed businesses should make their own decisions without T… https://t.co/mNQaH9vS9u
— Jennifer Taub (@Jennifer Taub)1590267951.0

Who cares about science and danger? Nobody should have to plan ahead to purchase a set of bartending tools that fit in a holder shaped like a boat.

Ok that does sound serious but I still don't see why we have to make an appointment to shop at Pottery Barn. https://t.co/Ly7KsRA0s4
— YesBiscuit (@YesBiscuit)1590275815.0

The only thing that separates America from Nazi Germany is the late PM shopping hours at Pottery Barn. Without thos… https://t.co/KZLHup8a3w
— Ken Tremendous (@Ken Tremendous)1590265082.0

Of course, COVID-19 doesn’t only kill older people. That tweet is actually referencing another poor choice Stone made with his tweetin’ thumbs in recent hours, where he defended his infamous tweet by dismissing the nearly 100,000 U.S. deaths from COVID-19. “96k US deaths are tragic,” Stone generously acknowledged in the since-deleted tweet; “but of Mecklenburg Co's 72 deaths, 100% had pre- existing conditions or were in nursing homes.”

Charlotte-area comedians (Stone once represented the area) were in shock that Stone could have such an impact on the nation.

Shortly before deleting the tweet that made the construction CEO a household name, however briefly, Stone tried, in yet another deleted tweet (cached), to reframe the whole mess as the fault of “lefties.”

“Love how lefties are so worked up about my last tweet which highlights the frustrations so many have about how slow NC economy is reopening - slower than most states,” the failed politician wrote. “Maybe they believe govt should continue to write checks forever and keep the entire economy closed?”

By the time the tweets were deleted, of course, it was far too late. Stone also forgot one pesky detail.

This tweet is probably an accurate summary of Stone’s perception of his own entitlement.

In all seriousness, in addition to minimizing employee exposure to the novel coronavirus, these new policies are designed to protect consumers.

What kills me about this FORMER NC Representative bitching about Pottery Barn is that he doesn't realize that the e… https://t.co/ZD8vckpD12
— Noodle Bae (@Noodle Bae)1590281051.0

Here’s to all the businesses that are doing what’s right, even if they do charge over $100 for shower curtains.