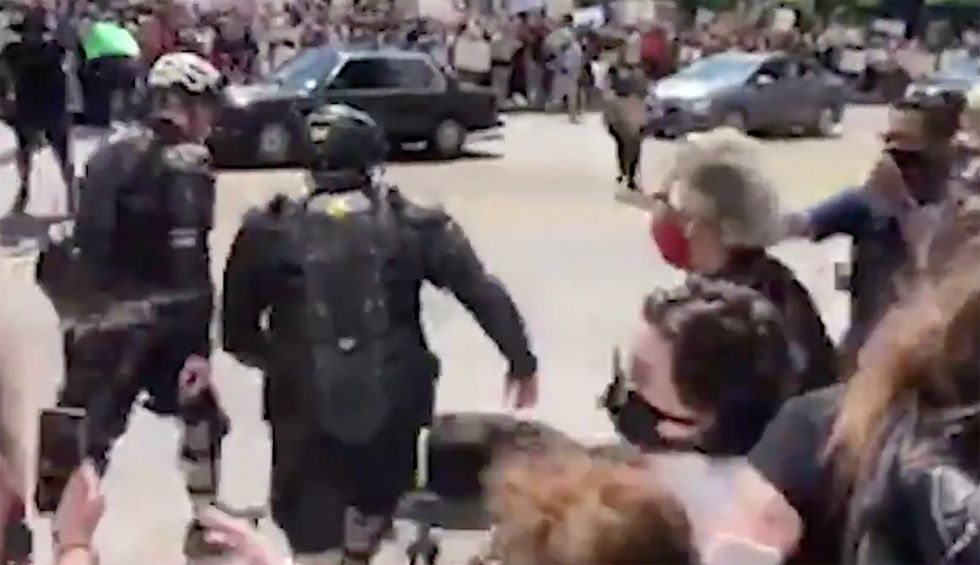 Image via Screengrab.
Denise Oliver Velez
and
Daily Kos
May 31, 2020

Congresswoman Joyce Beatty, Columbus City Council President Shannon Hardin, and Franklin County, Commissioner Kevin Boyce, were all pepper-sprayed today, during a protest outside the Ohio Statehouse, where people were peacefully demanding an end to police brutality and marching for justice.

Beatty, who has represented Ohio’s Third Congressional District since 2013, was at the protest, which is now in it’s third day in downtown Columbus, to help de-escalate a tense situation in the city, where the Governor, Mike DeWine, has just called out the Ohio National Guard.

Council President Hardin tweeted a video with Rep. Beatty saying that they are okay, and called on people on both sides of the protest to remain calm. Beatty said in an interview later Saturday that the pepper spray was “prolific.”

“Councilman Hardin got the brunt of it and he was in the middle of the sidewalk.” She added that she didn’t think the pepper spray was necessary. “I heard no warning,” she said. “Obviously if someone had said and held up a pepper spray and said, ‘I’m gonna pepper spray,’ we would have moved. Nobody wants to be pepper sprayed, trust me.”

A spokesperson for Beatty told NBC4 that while the protest was underway, someone started scuffling with police. Police took that person down, which made other protesters angry. Beatty stepped in to try and calm the situation when police started spraying. Hardin and Boyce pulled Beatty out of the fray.

Pepper-spray is no joke.

Beatty has been advocating for non-violence, while actively supporting the protests and castigating Donald Trump.

“We adopt the means of nonviolence because our end is a community at peace with itself. We will try to persuade wit… https://t.co/MX4FEtw6gT
— Joyce Beatty (@Joyce Beatty)1590851602.0

Glad she, Hardin and Boyce are okay —and I thank them for their service. I’d also like to say thanks to all those who are out in the streets today, across the nation, demanding justice.